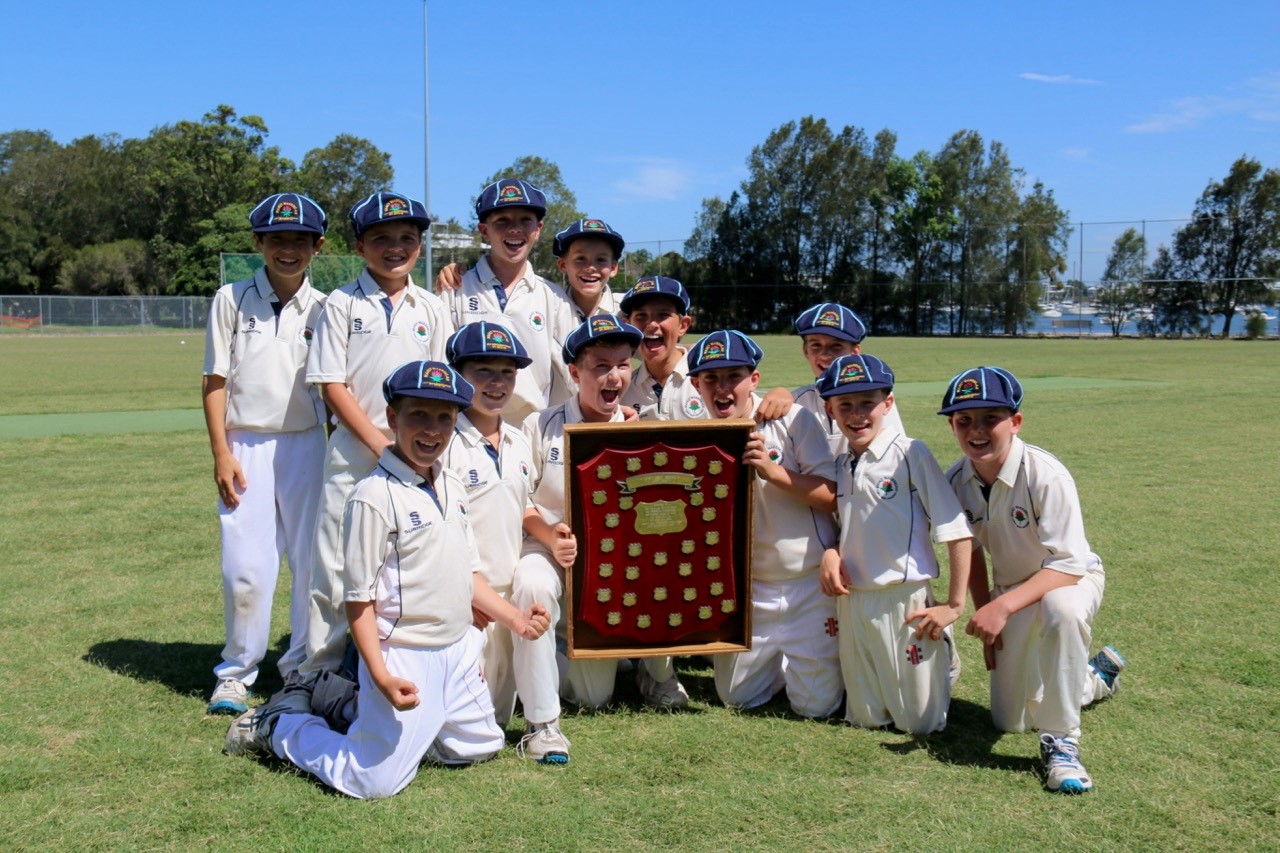 The Manly Warringah Junior Representative U11 team have won the Creek Shield with a great win over rivals St George.

It is the second year in a row that Manly have won the Creek Shield, and as it turns out it will be the last with Junior Reps starting from U12s next year all across Australia.

Congratulations to all players, coaches, parents and supporters. Below is the match report from the day.

After 2 seasons of preparation and what seemed like an eternity for the first game to come around, the young Men from Manly were ready to battle St George for what could be the final edition of the NSW DCA U11 JH Creak Shield.  Players were greeted by perfect summer conditions and a pretty fast and scenic track (by recent experiences) on the harbour shores at Putney

Having elected to bat, Manly sent out the opening pair of Scotty “the Rock” Tipton and Gus “the Other Rock” Greenland against the highly fancied St George bowling attack.

The boys saw off the new ball and wicket taking opening pair to be 0 for 34 at the first drinks break. The St George opponents had rolled entire teams for less throughout the season so to have not lost a wicket was a great platform that gave Manly the early mental edge.

It wasn’t until the score had reach 48 in the 19th over before the first wicket, Gus Greenland, Run out for 24 just as he was putting the pedal down.

With the score just short of the half century and all but 1 wicket still remaining, Scott Tipton was still intent on upping the ante, dancing down the wicket to the spinner only to be stumped on 19, Manly now 2 for 48 with 2 new bats at the crease.

Bill “Aston” Martin and Captain Caleb Conners were preparing to launch a fresh assault of quick singles interspersed with boundaries when the plan unhinged with a mid-wicket mix-up. Bill Martin was found just short of his ground on 3 runs. The game had a whole new complexion with the score now 3 for 51 at the half way mark and the St George boys were breathing fire.

Aidan “smiling assassin” Boulton joined his skipper at the crease to pour cold water on the attack and re-establish the upper hand for the Manly boys. The score advanced to 64 before the skipper was lost at sea, Conners unlucky to be bowled for 13, 4 for 64 after 25 overs. With 15 overs remaining and a desire to get over 140 the game could go either way if the panic button was pushed. Lukas “Overdrive” Overhoff paired up with Boulton and the panic button was pushed – by the opponents. Overhoff narrowly survived dismissal when he skied a ball 20+ meters directly above the wickets and somehow wasn’t caught, hit-wicket or run out. 3 chances in one and just the break that was needed. The game quickly began slipping from St George as the tally passed 100 in the 33rd over.

After settling in, Aidan set about creating a wagon wheel of boundaries to nearly all points of the compass before he was bowled for 18 (a partnership of 47 just what was required). Some classy shots belied the age of this young cricketer and he still held some aces up his sleeve. Manly 5 for 111 in the 36th over. The batting dial was now pushing into the red. Matthew Melville launched off the mark with a boundary only to be caught a few balls later, 6 for 115.

Harley “Likes a chat” Cruickshank was reacquainted with his AFL teammate, Overhoff, and the pair put the “end” into the “defendable” total.

The Hoff built his own substantial wagon wheel on the way to 38 including 6 boundaries, before being caught in the last over going for boundary number 7. Now 7 for 143 with 1 ball to be bowled. Flynn Paverly made his way to the middle but had little to do at the non-strikers end on what was expected to be the last ball.

The last delivery was a no-ball sent to the boundary, the re-bowled delivery was legal but suffered a similar fate, Cruickshank finishing unbeaten on 23 from 15 balls and Manly ending the innings on a respectable 152.

During the lunch interval the Manly boys were confident of bowling their way to the title but the work was still to be done. St George were worthy finalists having won 7 from 7 batting second.

Flynn Paverly made an instant impression on the game when he tried to take the head off the opening batsman with a no ball followed by a beautiful 2nd ball and took a wicket with the 3rd ball of the second over. A fast full toss was sent skywards and the tall paceman outreached his teammates to claim the first catch.

Flynn did all the work again in the 4th over by effecting a run out to remove the other opener, 2 for 13.

A quick rotation of bowlers brought Arlo “the Sheik” Thompson and Aidan Boulton into the attack and the runs began to slow. The Manly boys were alive and sharp in the field and their efforts were soon rewarded when Overhoff and Greenland combined for the second run out. 3 for 22.

Runs then completely dried up before Scotty Tipton joined the fielding exhibition with the 3rd run out and it was 4 for 48 from 19 overs.  Soon followed another wicket to Thompson when Aidan Boulton held a nice catch, 5 for 53 and Manly were half way home.

Zane “smiley” Cassie brought heat back into the attack to rattle up the lower order and rattled up the stumps to remove the stubborn no 3. At the conclusion of his tidy spell the St George team were on the canvas at 6 for 62 with 22 overs gone. Zane’s bowling partner at the other end, Matthew Melville, delivered some crafty blows, none craftier than his first which bowled the no 8 batsmen. 7 for 64. 88 runs required from the final 16 overs with only 3 wickets in hand.

Aidan Boulton effected the 4th run out of the innings (his second) and the St George team looked to be finally out of puff at 8 for 87, still 65 runs in arrears.

Captain Caleb Conners turned to himself to clean up the tail and didn’t let himself down by collecting the batsmen before the ball ricocheted onto the stumps. 9 down with too many to get. Harley Cruickshank was given a final chance to put St George to the sword. He turned to his slower ball which deceived the no 11 and the dream was alive.

St George all out for 95, Manly victors by 57 runs, completing an 8 from 8 campaign.

Huge contribution by all with bat, ball and in the field. Thoroughly deserved by the boys.