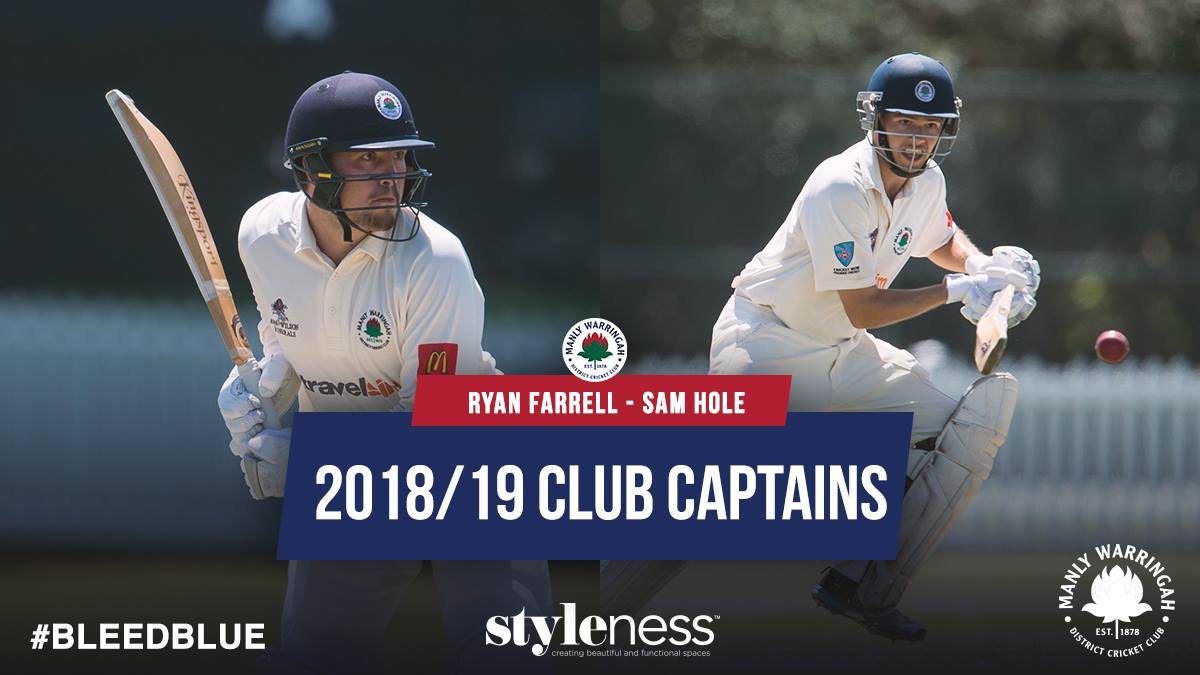 The Styleness Manly Warringah Waratahs are pleased to announce the appointment of local juniors Ryan Farrell and Sam Hole as the Club Captains for the 2018/19 season.

Farrell and Hole takeover from last seasons Club Captains Billy D’arcy and Cameron Merchant, who have decided to step down from the role to concentrate on playing. The Waratahs would like to congratulate and thank ‘Nappa’ for all his hard work over the last season, and for the tireless efforts Billy has put in as Club Captain for the last three seasons.

Hole, a former Green Shield captain, is one of Manly Cricket’s favourites, and has played senior cricket with Manly since he was 16 years old, recently notching up his 2000th run for the club.

Farrell, another former Green Shield as well as Poidevin-Gray captain, is fast becoming one of Manly’s most talented cricketers. His onfield talent has led him to a 3rd grade premiership in 2014/15, as well as holding a first grade century to his name.

Farrell, who like Hole has played with Manly since he was a teenager, spoke of the pride in being appointed to the role, and the excitement of being able to give back to the club.

‘Its just exciting to be given the opportunity to give back to the club that has been apart of most of my life.’

The traditional elements of the club captain’s role, include organising social events and contributing to the strong culture of the club. Additionally, this season marks the first time the club captains will act as a liaison between the players and the board.

The Club Captains will attend board meetings, and report to the board any issues  that have been brought forward by the playing group, as well as players who have been going above and beyond for the club. The captains will also be able to share their opinions on any concerns that they may have about the playing group, which as a whole, will allow for greater communication amongst all areas of the club.

Hole believes the new responsibilities will help steer the club in a positive direction and will allow for future leaders to be identified to the board. Hole also believed that the ability for the players to express any concerns to the board will allow for the club’s unity to grow.

‘This newly designed club captain role gives the playing group a platform to express their opinions, and ultimately steer the exciting new direction this club is heading in.’

It is a truly exciting next step for the club, with the appointment of Farrell and Hole as club captains, and we at Manly believe they will help build on the work of previous club captains and continue to strengthen the great culture at the club.

Manly Cricket congratulate Ryan and Sam on their appointment, and wish them the best for the upcoming 2018/19 season.