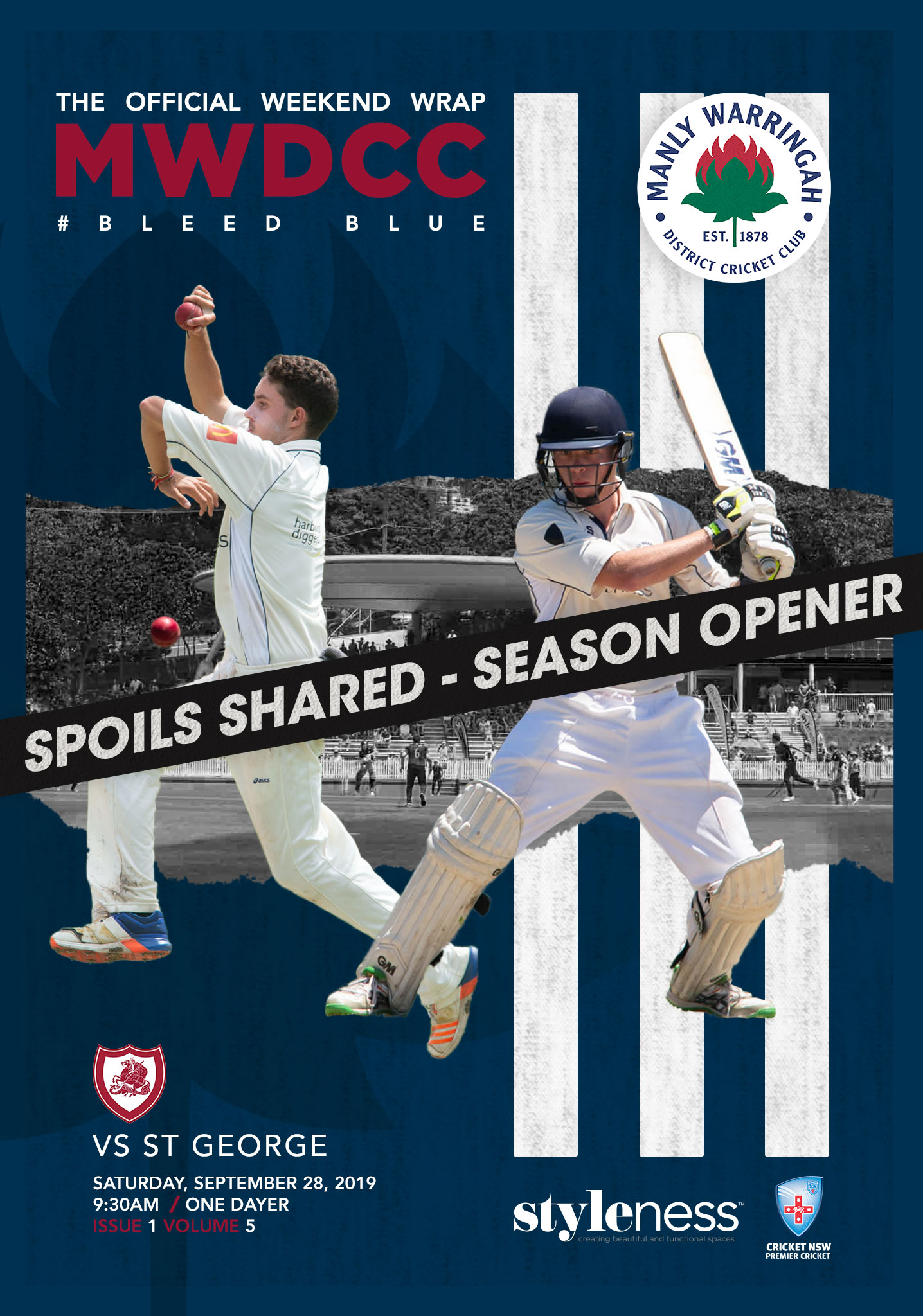 Manly had a mixed weekend against St on Saturday George to open the 2019/20 season, with 2s, 4s and 5s going down badly, 3s compiling a convincing win and 1s coming out on top in a nail-biter at Hurstville Oval. 5th Grade struggled to get going with the bat with only James Buchanan reaching 20, before St George chased it down in the 27th over, 4 down. 4th Grade also had a tough day, only managing to limp to 182 off the back of with only Lachy Charles (42) and Hamish Starr (33) getting starts with 42 in response to St George’s 5/244. 3rds put in a strong display, recovering from a sketchy start featuring a vintage Sam Hole barbecue thanks to a 51-run partnership between Jordan Daly (50) and Isi Vumbaca (44) and a 43-run stand between Isi and newcomer Griffin Lea (11) who impressed in his debut with the Tahs. 2nd Grade had a day to forget as they were rolled for 67 and were passed in the 19th over, but it was an exhilarating win by 1st Grade that capped off what would have otherwise been a very average weekend of cricket for Manly. 1st Grade won in an exhilarating match at Hurstville thanks to an unbeaten 118-run stand between everybody’s favourite reality TV celebrity Cameron Merchant (59*) and Joel Foster (59*), who capped off a fantastic start the season.

This week’s 4 Pines Player of the Week is 1st Grade all-rounder Joel “Foz” Foster who had a cracking game with both bat and ball to start the season against St George. Foz was near-faultless with the ball, taking 4-29 off 10 overs that proved absolutely critical in restricting the hosts to 9/225 from their 50 overs. That wasn’t all, as he shared in an unbeaten 118-run stand to get 1st Grade over the line on the second last ball of the match in what was a thrilling season-opener at Hurstville Oval. Entering at 5-110, he met Cameron Merchant and together steadied the Manly ship. The pair batted with great composure under pressure as they let the game go deep into the final overs. As the target approached, Foz and Nappa kept their heads and backed themselves, eventually steering the Manly boys to a nail-biting win on the second last ball of the match. 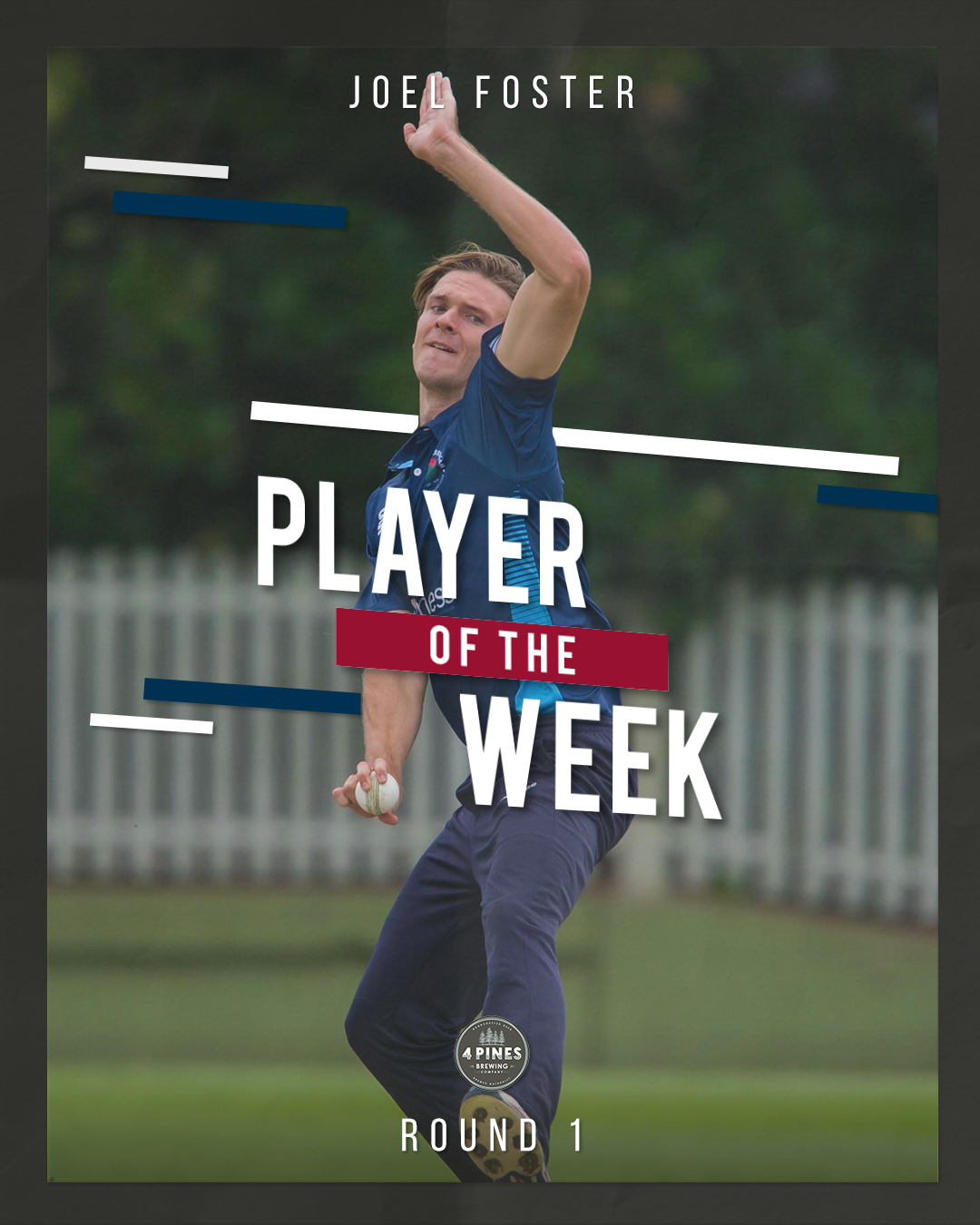 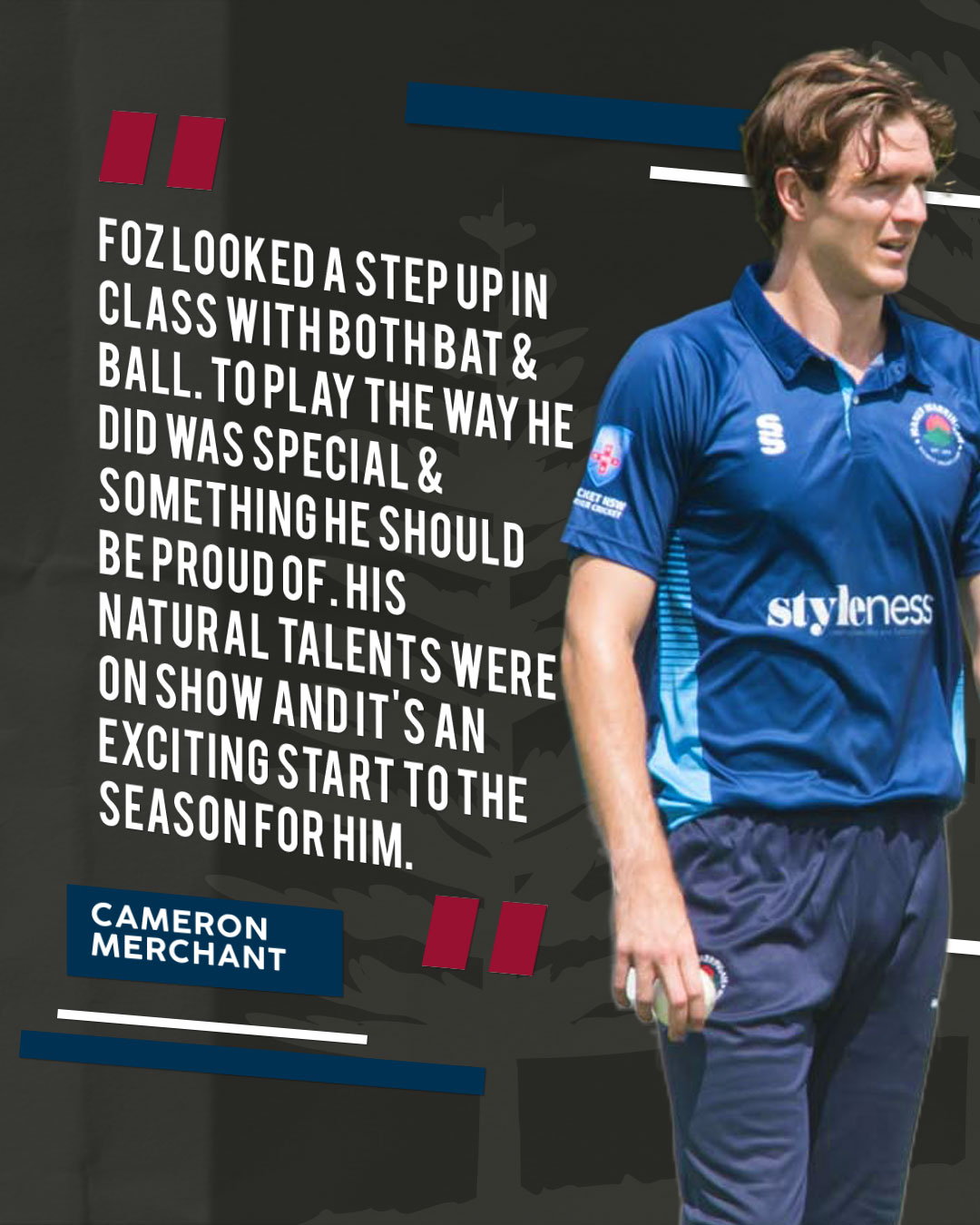 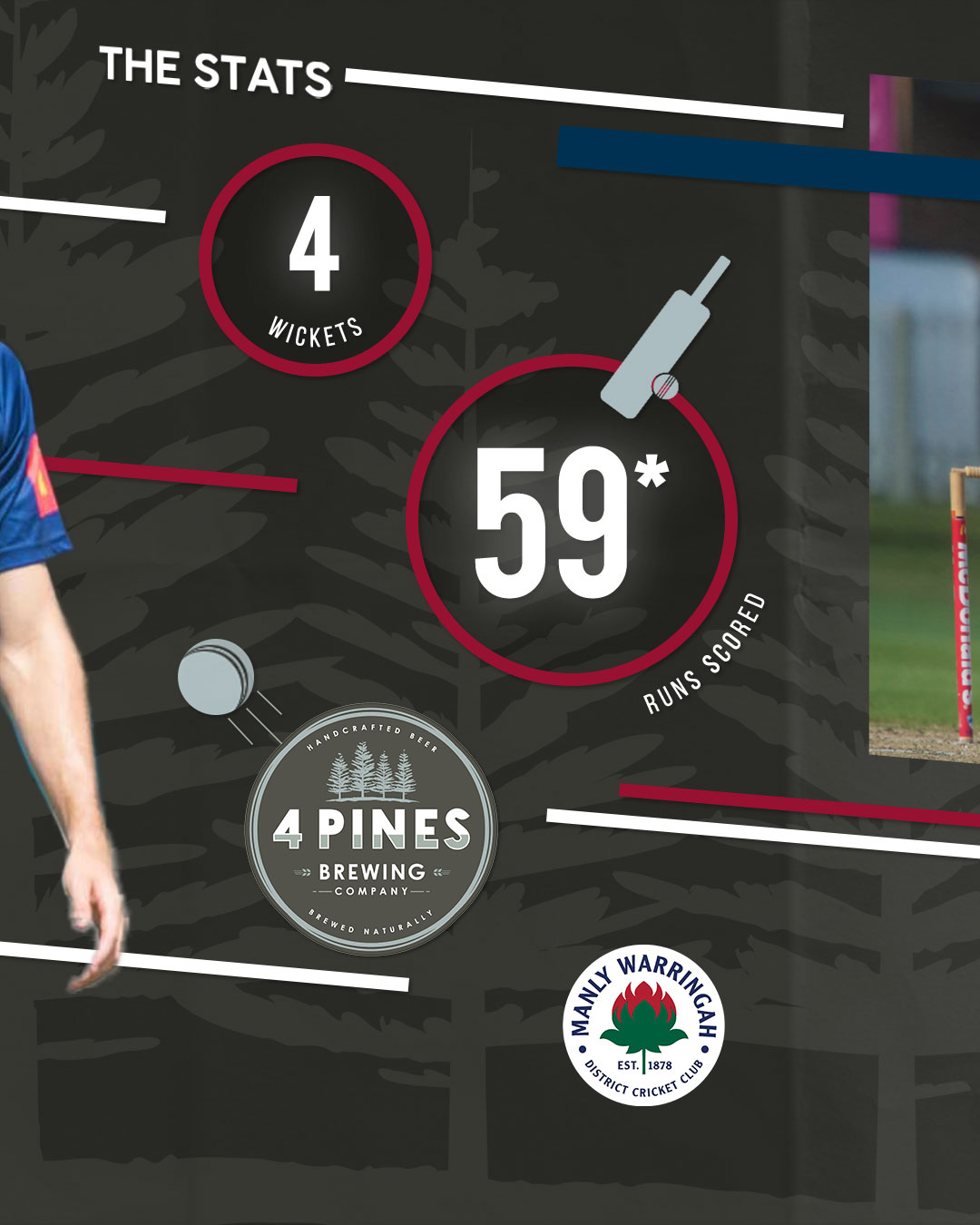 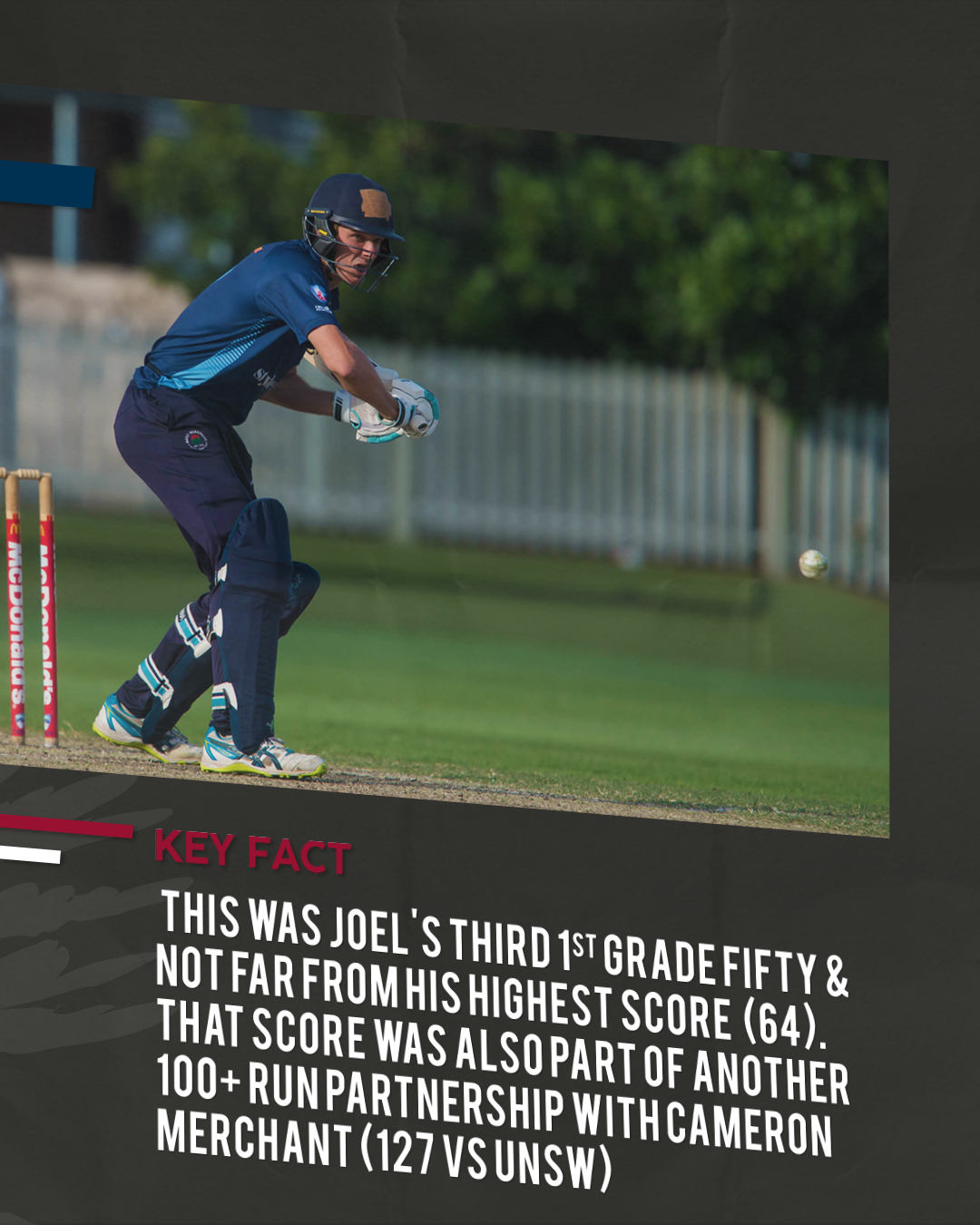 St George won the toss and decided to bat. They started off reasonably well and with some luck, 0/44 off 10. Jack Edwards and Ryan Hadley came on to bowl in a double change and bowled beautifully in a partnership and were very confident with their plans. This resulted in a well deserved wicket for Jack followed by two for Hads.

Joel foster came on and continued the great bowling display that was backed up by the fielders all day. Foster was consistently our best all day with the ball, keeping it very simple and executing beautifully, finishing with 4 wickets.

We looked as though we would bowl out St. George for under 200 when they were 9/185 but some decent batting from a familiar face lead to a 40 run last wicket partnership, giving them 9/225 after their 50.

Trent Copeland was a genius with the new ball doing some early damage by taking the wicket of both openers, having 2/9 off his opening 7 over spell. We managed to consolidate a little with Jay and Ollie and again with AB and Ollie. It was an impressive effort from Ollie scoring his 48 but he unfortunately walked across in front of his stumps one too many times and was trapped LBW. AB followed not too long after and we were 5/110 after 30 overs and things were looking a bit dicey. Enter Cameron Merchant and Joel Foster, these two showed great poise and intelligent batting in a match winning partnership that left them both 59* and Nappa hitting the winning runs off the second last ball. These guys remained calm and were prepared to let the match go deep into the last over, even letting the required run rate to go above 11 at one stage but knew what they were capable of.

This is a game we have often let slip away and we showed great character on both sides of the ball in what was a fantastic start to the year.

Rd 1 vs. St George Disappointing day for 2s on the whole, thoroughly outplayed by St George. Losing the toss and being sent in on a green manly oval wicket we knew it would be tough early. We started poorly losing Ned in the first few overs. Max and Ryan saw off the openers before Ryan was out to the St George skipper. From there the wickets tumbled very quickly, their skipper bowled quite well all morning and removed most of our top and middle order. Max was the only one putting up any resistance with a fighting 41 out of a total of 67. It was a very disappointing batting innings first up for the year after a strong pre-season.

Although we would have bowled first as well the pitch was definitely not that bad, as Max showed us all with his 41. St George cruised to a 10 wicket win in reply. We bowled and fielded quite well in fairness without having any luck. Plenty of play and misses without being able to grab an edge. Onto next week!

3rd grade batted first and managed to put on 209 with Jordan Daly top-scoring with 50 and Isaiah Vumbaca posting an important 44. The innings saw some ups and downs as we lost three early wickets, but some key partnerships kept our total ticking away. With some stable middle overs between Jordan, Zach Trewartha (21) and Isi Vumbaca we were able to free our arms in the later overs. Although knowing 209 was a defendable total we felt that we still left 30-40 runs out there by not having a batsmen there in the final overs. Definitely something to think about going into round 2.

The second innings saw Manly-Warringah restrict St George to 9/188 from their 50 overs with N McLachlan taking 4 and I Vumbaca taking 2. Once again our bowling innings wasn’t always smooth sailing. After an economical start to the innings, we let our foot off the pedal a little, dragging our lengths too short and letting the St George batsmen settle. However, feeling that we dominated in the later overs taking key wickets from N McLauchlan and I Vumbaca and correcting our line and lengths, we forced St George out of the game. Although some communication issues in the field lead to extra runs, it’s definitely something that we can clean up easily for round 2 As the fielding was predominantly quite good.

Manly-Warringah takes the win in the first game of the season.

The mighty fourth grade boys turned up to Grahams Reserve full of optimism and excitement to begin our season on a high, and with the all too familiar opposition in St George from last year’s grand final the boys were keen to make a huge statement early on in the season by knocking off the defending premiers.

After a high paced game of touch footy where superstar winger Starry peppered the human turnstile Akhurst the St George captain won the toss and elected to bat on a flat, hard looking wicket.

Openers Wigney and Hobson began well on an excellent batting wicket, toiling away early and hitting a good line and length for no reward, as the bowling innings progressed the wicket seemed to get flatter and flatter offering very little but credit should go to the bowlers being disciplined in their approach. The St George openers batted quite well, taking advantage of any four balls and rotating the strike. Unfortunately, they benefitted from being given a few chances which they cashed in on as our fielding efforts weren’t quite up to standard. The introduction of spin proved to be a little turning point as Trewartha, Gummer and Osbourne managed to restrict the batsmen causing frustration and risky shots that we were unable to hang onto.

Before 2nd drinks disaster struck when captain Gummer went down with a back injury and was forced from the field but we were lucky enough to have little Willy Gustafson coming on to assist, doing an excellent job in the outfield. After drinks, Hobson was reintroduced into the attack to great effect, knocking over the opener for 80, taking the first wicket at 180 giving the boys feelings of déjà vu from last years GF. The last session was very positive for the Waratahs as a fightback ensued, Hobson castled the second opener, with Starry also picking up 2 wickets and Wiggers 1. Finishing the innings on 5/244 the boys were full of confidence knowing how good the pitch was playing.

Unfortunately we got off to a nightmare start with Cohen being dismissed in the first over. Our innings never really got going as we weren’t able to rotate the strike enough and as soon as partnerships started to develop we lost wickets and lost any momentum. Wheeler, Osbourne and Akhurst showed glimpses of a fightback all getting starts before being undone by restrictive bowling and St George taking their chances. The pick of the bats was Charles who showed grit with wickets falling around him, eventually being dismissed for 42. Some lusty hitting by Starr (33) provided fireworks however it was too little to late as the run rate climbed as wickets fell, leaving Josh Wigney to have some fun at the end getting a career high score of 19 providing some entertainment. The boys were dismissed 182 and were outplayed by the St George side. Round 2 sees us go up against Mosman and the fellas will be raring to make amends and put in a strong performance against the whales.

5th Grade’s season began at Cahill Park, which is, evidently, one of the great 5th grade grounds, to take on St George. Andrew Rochford’s return to 5th Grade got off to the best of starts, as he won the flip of the coin and proposed that St George spend the first 50 overs in the field. Openers James Buchanan and Sam Barnett, after some wise words from Rochie Doug, set about building a solid partnership to enable a strong 50 overs of batting from the Manly boys. Unfortunately, we lost Barnett early and despite looking promising early, Ned Healey was caught at midwicket, bringing Ollie Melville to the crease. Both James and Ollie looked solid as they got through the first 20 overs of pace, before both fell victim to some accurate, consistent spin bowling. Lachie Kerr, Rochie and Jordy Brewster and Reiley Dunlop all came unstuck by spin, leaving Liam Dinan and Evan Dunnachie and their valiant lower order batting to scramble Manly’s total to 108 as we were all out in 48th.

The boys were confident that if we put the ball in the right places and held onto our chances, we were in with a shot of defending our total. Early wickets were crucial, and Rochie did just that as he found the edge of St George’s opening batsman in the 3rd over and Dunlop took a smart catch to his right. Lachie Kerr toiled away at the other end to no avail, whilst Liam Dinan finished at 0-7 off his very economic 5 overs. Ned Healey and Luke Morley both knocked over the St George number 3 and 4’s stumps respectively, and after Dunnachie found the edge for Manly’s 4th, Rochford and Kerr came back on as St George needed 30 to win. Unfortunately, a few big shots resulted in the total being chased in the 27th, with Manly conceding a bonus point.

Lessons were learnt, and after dissecting what can only be described as a poor performance from 5th grade, the boys were there to support 1st grade in what was a great run chase.