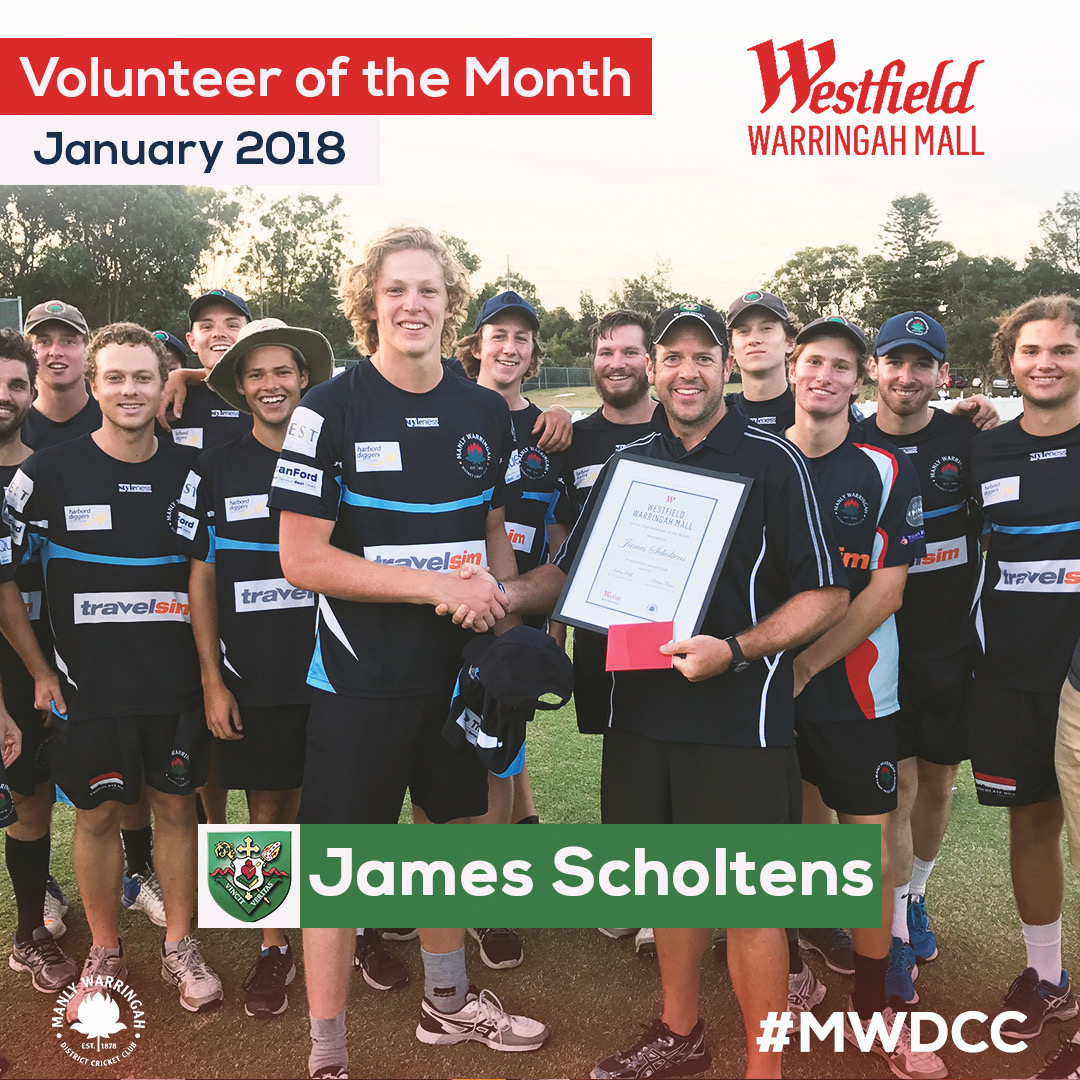 James Scholtens has been at the head of St Augustine’s cricket for the last 17 years.

During that time he has gone over and above in helping progress the junior players through their cricket program, with many of them going on to play for our club.

As a result of his dedication to St Augustine’s cricket, and indeed local cricket, over that time, he has been awarded the Westfield Warringah Mall Junior Club Volunteer of the Month for January 2018.

It is a bit of a left of centre set-up in local cricket to have a school as a local cricket club. St Augustine’s has always had a policy of students playing for the school in the local junior competition of a Saturday morning, on top of playing in the various school cricket tournaments in the Northern Beaches area and across Sydney.

James has been at the forefront of this for many years. He has seen the progress of many juniors through the St Augustine’s system such as Michael Visser, Mickey and Jack Edwards, Billy D’Arcy and Jacob O’Sullivan just to name a few.

He has put in countless hours as coach of many junior teams, both past and present, as well as providing the Manly Warringah Junior Cricket Association (MWJCA) with logistical support wherever needed.

James puts in countless hours in helping the obtain St Augustine’s as a site for many MWJCA events, including junior rep capping night, MWJCA scoring course and the MWJCA presentation night. He actually also MC’d the presentation night and has become a bit of an institution in the role.

James came down to a training session last Thursday and was presented to the playing group. Phill Edwards, who has had a long involvement with St Augustine’s cricket from an administration perspective, as well as being the father of Mickey and Jack, took the players through the reason’s for James winning the award. He was then presented a with a $250 gift voucher from Westfield Warringah Mall, a framed certificate, and a club shirt and hat.

We are so pleased to have Westfield Warringah Mall on-board for this important award for 2017-18. It is vital that we support our local juniors and reward those that go above and beyond. This is something that Westfield recognised as soon as we began talking about this award.

Their community engagement is really coming along in leaps and bounds and we would like to thank an organisation that is such a big part of the Manly Warringah area for supporting local cricket like they are.