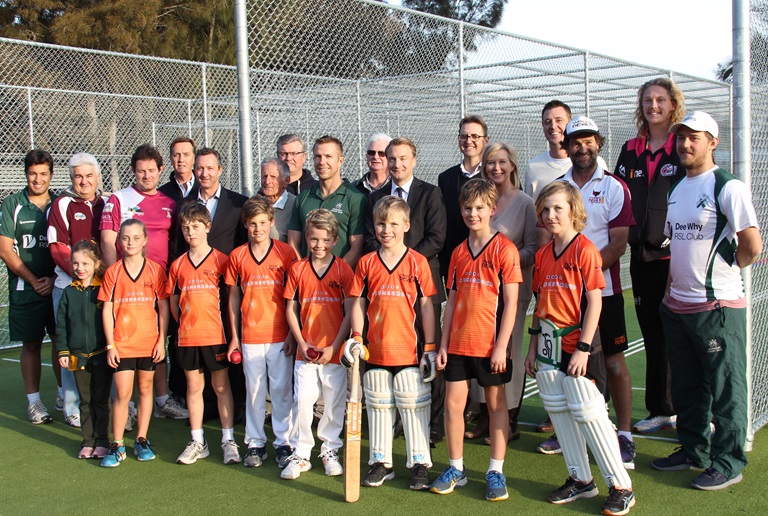 Our brothers at Warringah Cricket Club have partners with stakeholders across the Northern Beaches and beyond in the updating of training facilities at Weldon Oval.

Weldon Oval is a hub of cricket on the Northern Beaches. As well as being the home ground and training location for our Shires club, it also hosts Harbord Devils Junior Cricket Club as well as Harbord Bowling Club Cricket Club.

It has been a project kicked off by former WCC President Michael Day, but contributed to by the cricket community and government agencies. In partnership with Cricket Australia, Cricket NSW contributed $35,000 to the total cost of the six new training nets.

Northern Beaches Council invested $100,000, while the NSW Government contributed $28,000, with the remaining funded by the Warringah Cricket Club and other parts of the northern beaches cricket community.

The construction of the training facility involved the redevelopment of two nets that were dangerously close to a walkway into a half basketball court and a handball court, refurbishing two nets and the installation of an additional four brand new nets.

Although this was outside of the recent announcement of $35 million being channelled into grassroots cricket facilities from Cricket Australia, it does show the fantastic commitment from our governing body to invest in local cricket.

WCC President Brad Lewis said it was an important investment for the club but also cricket in the local area.

“We have been looking for an upgrade to our facilities for sometime now, and to see the final result is amazing to see.

“To have all the contributors here today just goes to show how united the Cricket family is, and that when we put our minds and resources together we can do great things”.

“I know all of our club members are really looking forward to using the new facilities, and having the Junior and senior Harbord clubs able to use these nets as well is the icing on the cake.”

This is a great investment that will help foster our current and next generation of local cricketers, while ultimately leading to more enjoyment from the game across the Northern Beaches.

Congratulations to all involved from everyone at the Manly Warringah Waratahs. It is important to keep cricket on the Northern Beaches at the top of the tree, and this goes a long way to doing that.