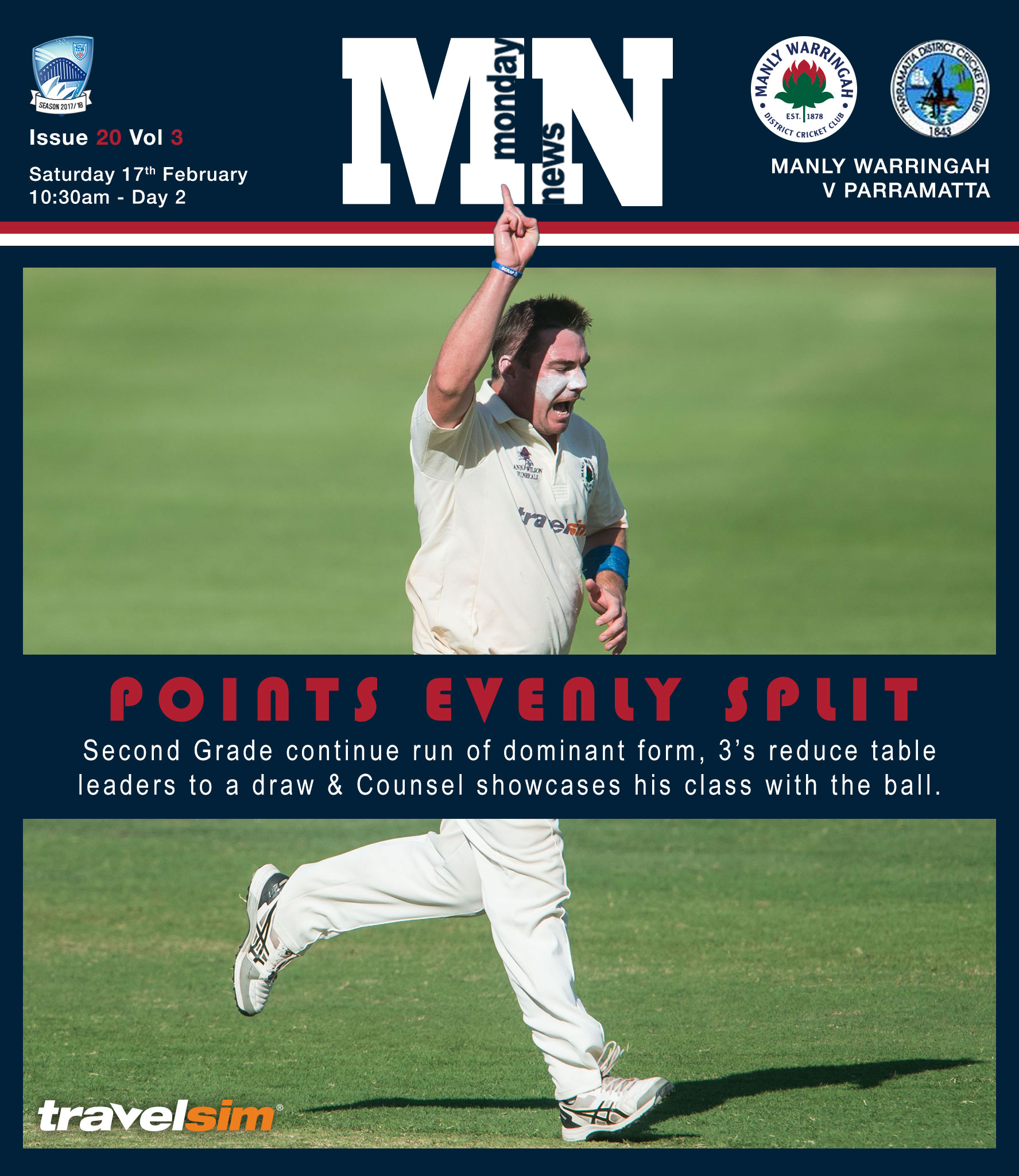 In a clash that was built up as being the deciding round for the Club Championship, The TravelSIM Manly Warringah Waratahs and Parramatta split the points in a see-sawing contest during day 2 of our Round 13 match-up.

It was fairly even across the board heading into day 2 with the Waratahs having the runs on the board in all grades except for 5th grade. We were confident of our bowling group stepping up to gain the winning edge and propel us to victory and Club Championship lead.

But 2 wins to each club, with Manly taking the biscuits in 2s and 4s and Parramatta winning 1s and 5s, meant that we are no closer to deciding the 2017/18 Club Champion. 3rd grade ended up in a well fought draw.

There’s no doubt we had some chances to win 1s and 3s. Parramatta slumped to 5/125 at one stage in 1st grade before some great hitting from the Parramatta middle and lower order. 3rd grade also had their opportunities but just couldn’t pick up the last few wickets.

So with 2 rounds to go, we sit 42 points behind Parramatta and 65 points in-front of 3rd placed Sydney. It’s still anyone’s to win.

One of the pleasing aspects of the round is that we now have 4 of 5 grades in the top 6. 1st grade are coming 6th on quotient, but have their destiny in their own hands as we play teams lower on the table in the last 2 rounds. 2nd grade have also jumped into 6th spot after some great form over the last few matches.

3rd grade have slumped to 9th and have it all to do to get into the top 6, only now a mathematical chance, while 4th grade (3rd) and 5th grade (4th) are still well positioned for a strong finals run.

Michael Counsell sent a message to the entire 4th grade competition with an exceptional bowling performance in 4th grade on Saturday.

Mickey came to the club at the start of last season and although has shown amazing net form, his match-day performances have been some-what inconistent.

The big show has discovered his mojo with 35 wickets for the year at an average of just above 11. This has been as a result of his consistency with the ball, but hasn’t taken any big hauls. He changed that on Saturday, bowling with pace and bounce to trouble all batsmen.

It’s a great reward for Michael’s hard work at training and he is a well deserved 4 Pines Player of the Week. 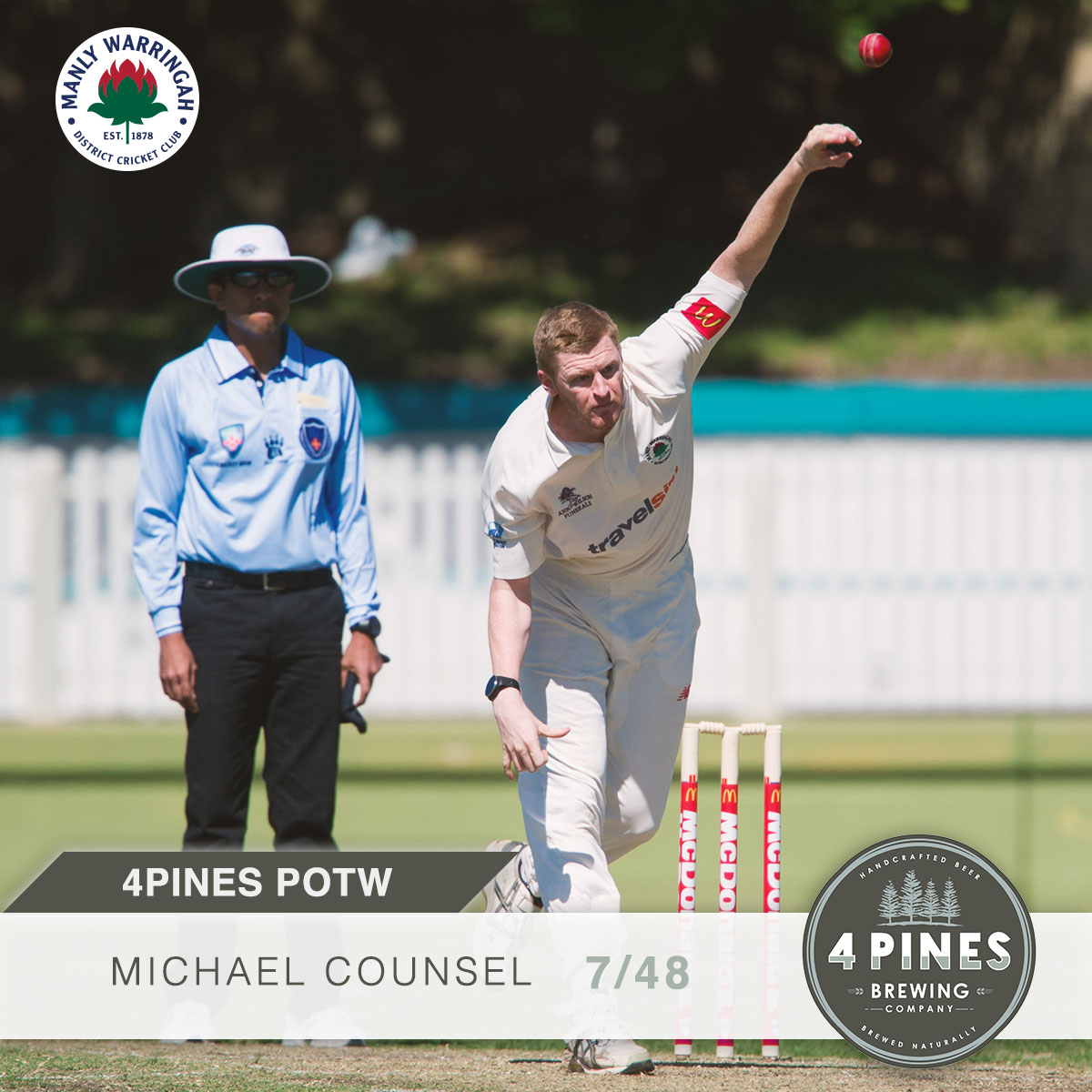 ay 2 at the beautiful Manly Oval consisted of bright blue skies and a beautiful batting wicket on hand as the Tahs looked to defend their total declaring at 9/303 and no change from last week.

We were up to the task as they toiled their way through the day jagging consistent and well shared wickets between the main bowlers.

Mickey Visser was impressive again with the new ball, while Nick McLachlan and Joel Foster also bowled well. We got them to 5/125 midway through 2nd session thanks to a Beadle wicket.

There was a small partnership however at 6/167 we had Parramatta in a great position with Beadle getting his second wicket. We were optimistic about the days play before Parramatta’s number 7 came to the crease to throw caution to the wind and ended up with 79 from just 64 deliveries including 7 sixers which proved to be the difference as Parramatta chased down 303 in the 79th over still with 3 wickets in hand.

A strong and disciplined effort from Manly but yet possibly another one that slipped away.

econd grade had another great win on the weekend – our 4th in a row. Defending a solid 312, we made a few breakthroughs in the first hour courtesy of opening bowlers Andrew Jamieson and Tom Kaye. The introduction of spin through Joe Graham produced another quick wicket and we finished the first session in the box seat with Parramatta 4-79 after 29 overs.

The second session was a bit more of a grind as the Parramatta skipper batted well supported by the middle order. We managed two wickets with Ryan Farrell bagging an important wicket – a great outfield in the deep by the Deep (Ashdeep).

After tea it soon became obvious Parra were no longer chasing the win and were hoping to survive for a draw to protect their lead in the club championship. The manly boys went on the attack with their bowling and field settings and ended up taking the 10 wicket with 7 overs to spare. Joey Graham and Andrew Jamieson both bowled well to take 3 wickets each, Ryan Farrell took 2 while Tom Kaye and Matt White chipped in with one a piece.

Another solid win for the boys who will be looking to keep the roll going this coming round against St George.

Big thanks to Roy Vumbaca who spent both Saturdays at our game, Gordon Currie for his great work on the scorebook and of course Will Harding for everything he does for the team.

s batted on in the hopes of getting an extra 40 or so runs to put the screws to parramatta on day 2.

The plan was to knock the ball around and not be silly. Hicksy immediately disregarded this plan as he ran himself out by half a pitch.

Sam Alexander came to the crease and immediately looked good. Captain Javed Badyari also batted well at the other end and our score ticked over.

Sam nicked off and was given an almighty send off. Seemed overly aggressive for the short amount of time he batted. They might have played him before. Skipper Badyari then declared at 238 with 70 0vers to bowl out the opposition.

We started well with the ball with Josh Wigney striking twice early. Two good catches in the grippers and Parramatta were in trouble.

The skipper came on and took two before tea and we were well on top.

Sam Alexander and Izzy Vumbaca then bowled well in tandem after the break, however it was the return of Wiggers that brought two more wickets, one with his first ball of the new spell.

From here Parramatta formed a partnership as the wicket flattened out. Izzy continued to toil away and produced an absolute gem to get our 7th wickets. Unfortunately we were not able to take any more as Parramatta shut up shop.

A disappointing way to end what was otherwise a great performance from the boys.

he mighty 4’s returned to Merrylands oval tasked with defending the imposing total of 232. Openers Wilson, with the ball on a string and Counsell sending down his thunderbolts opened up brilliantly with Counsell dismissing the opener with his first delivery in the second over of the day. Wilson struck soon after, before another two quick wickets to Counsell left Parramatta reeling at 4/34 at drinks.

As the remainder of the session went by, Wilson and Counsell continued through long spells respectively beating the bat countless times and creating a few chances that unfortunately went down. Jacob ‘The Yak’ Graham was introduced as well as Alex Bain and the two continued to toil away bowling excellent areas. Jimmy Crombie was then introduced alongside Zachy Trewartha with his ripping leggies and really dried up the runs before tea as the captain of the Parramatta side and the number six limped to tea at 4/97. A few poignant words from Skid during the break revved the lads up to finish the job in the afternoon.

Counsell was brought back into the attack and immediately made an impact taking two quick wickets to complete a fantastic five wicket haul. Crombie continued at the other end for a few more overs with the Parramatta lower order unable to lay bat on ball before Wilson was also reintroduced. Together the pair cleaned up the tail and tormented the batsman just as they started at the beginning of the day with both bowlers taking a further two wickets each, meaning both openers claimed all 10 wickets to dismiss Parramatta for 140. Wilson finished with the figures of 3/24 showing his class but the star of the day was none other than big bad Counsell with the outstanding figures of 7/48; a great reward for all the hard work the great man puts in. Special mention also goes to Matty Brewster who claimed five catches behind the stumps to go along with his counterattacking 50 last week.

All bowlers did a fantastic job to not only restrict the opposition to 140 on an absolute highway (300 par according to the Parramatta number 10) but clinically finish the game in the afternoon taking 6/43. The victory keeps the momentum going for 4’s who remain in 3rd position behind ND’s and Western Suburbs heading into a big game against St George next week.

he Waratahs turned up to Mike Pawley Oval needing to take 4/12 to get the 6 points. It was always going to be a tough ask however we were confident of producing some early inroads.

Parramatta had other ideas. They came out confidently and slowly but surely got the runs required to win.

Nothing much was going our way with 4 edges going through the slips with nothing going to hand. They continued on batting slowly until we bowled them out for 120, Jordy Brewster and Ben Falconer with 2 wickets each.

Brynn Mendel batted well for his 41* and Joel Davies for his 18. We ended up 27 ahead of their total when play was called at 5pm.

A pretty uneventful day, but our batting just wasn’t good enough on day 1 and we just weren’t quite able to make it up with the ball.

After defeating the previous leaders of the comp the week before, Manly were hoping for another good showing against a side with a lot of experience.  The game got off to the worst possible start, with Sienna bowled for a royal duck.  Genevieve was then bowled by a fast, short pitched delivery that virtually rolled along the ground and Hannah was also bowled soon after. We were 3 for 9 after 2 overs.

The ND’s keeper was also finding it hard with the variable bounce however and byes were keeping our score ticking over as Chloe and Gemma came together to build a very nice partnership.  Chloe then started to score freely, and Gemma playing patiently at the other end.  The pair put on 44, with Chloe being out in the 11th over for 25.

With a fairly quick outfield, we needed to bowl well. This week however, the girls bowling was not as tight as the previous week.  Not enough deliveries in good areas and the NDs country import punished anything slightly loose.

Their top scorer was dropped on 48 but showed some clean hitting to take Northern Districts passed Manly’s score in the 19th over without loss.  They continued to bat on for bonus points.  Sienna and Genevieve bowled their respective off spin and leg spin from the 19th over to the 32nd over.  Some very tidy bowling from both ends put some pressure on the batsmen, with Sienna ending up with 3 for 29 off 7 overs, and Genevieve 0 for 23 off 7 unlucky not to pick up a couple of stumpings.

Hannah, more known for her work behind the stumps, was thrown the ball, and ending up with 2 for 28, both batsmen being bowled.  Northern Districts innings ended on 5 for 226.

This was the last game of the regular 40 over season, the T20 tournament starts in 3 weeks.  Its been an enjoyable and satisfying season all round, with the improvement in all the girls obvious for all to see.