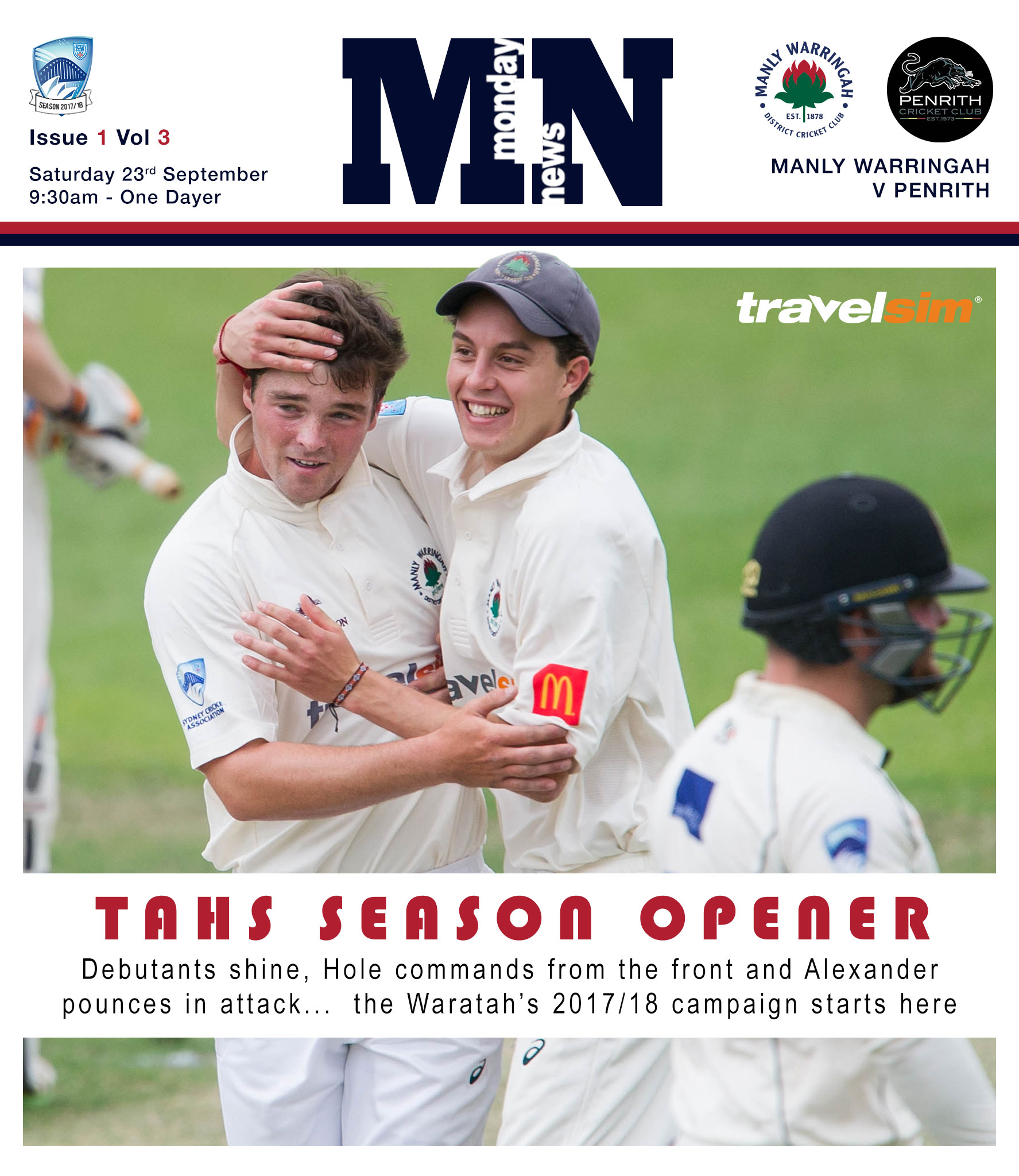 Season 2017/18 is finally here! The first round of the season saw the Tahs up against the Mountain Men. Strong teams named across the 5 grades were named and the Tahs came away with victories in 1s and 4s. First grade had a resounding bonus point win bowling Penrith out for 98 and chasing it 3-down. Second grade restricted Penrith to 7/188 from their 50 overs but couldn’t chase it down. Similar story in third grade with a great bowling performance but the batsmen couldn’t get the job done. Fourth grade chased down 158 for the loss of 5 wickets with a great first up win. Fifth grade managed 157, which was unfortunately chased down by Penrith for the loss of 5 wickets.

Highlights of the weekend include a Matt Alexander master class taking 4/25 off 10 in first grade, Tom Kaye starred with the ball in 2s taking 3/17 off 7 overs. Sam Webber was the lone wolf in 3s making 49* and ended up running out of partners. Stand-in skipper Sam Hole held fourth grade’s run chase together scoring an unbeaten 70. The highlight of fifth grade’s day was a terrific debut by Brynn Mendel scoring 51 out of the teams 10/157.

Does this great man have a weakness? Us here at the Tahs are yet to find one. Sam guided 4th grade to a terrific 5 wicket win batting all the way to the end of the run chase to finish on 70* chasing Penrith’s 158. The stand-in skipper led from the front all day in the field, also taking 4 catches and was well rewarded with a great score in the afternoon by being the rock in the batting line up. Sam has had a great pre-season and looks poised for a huge year. 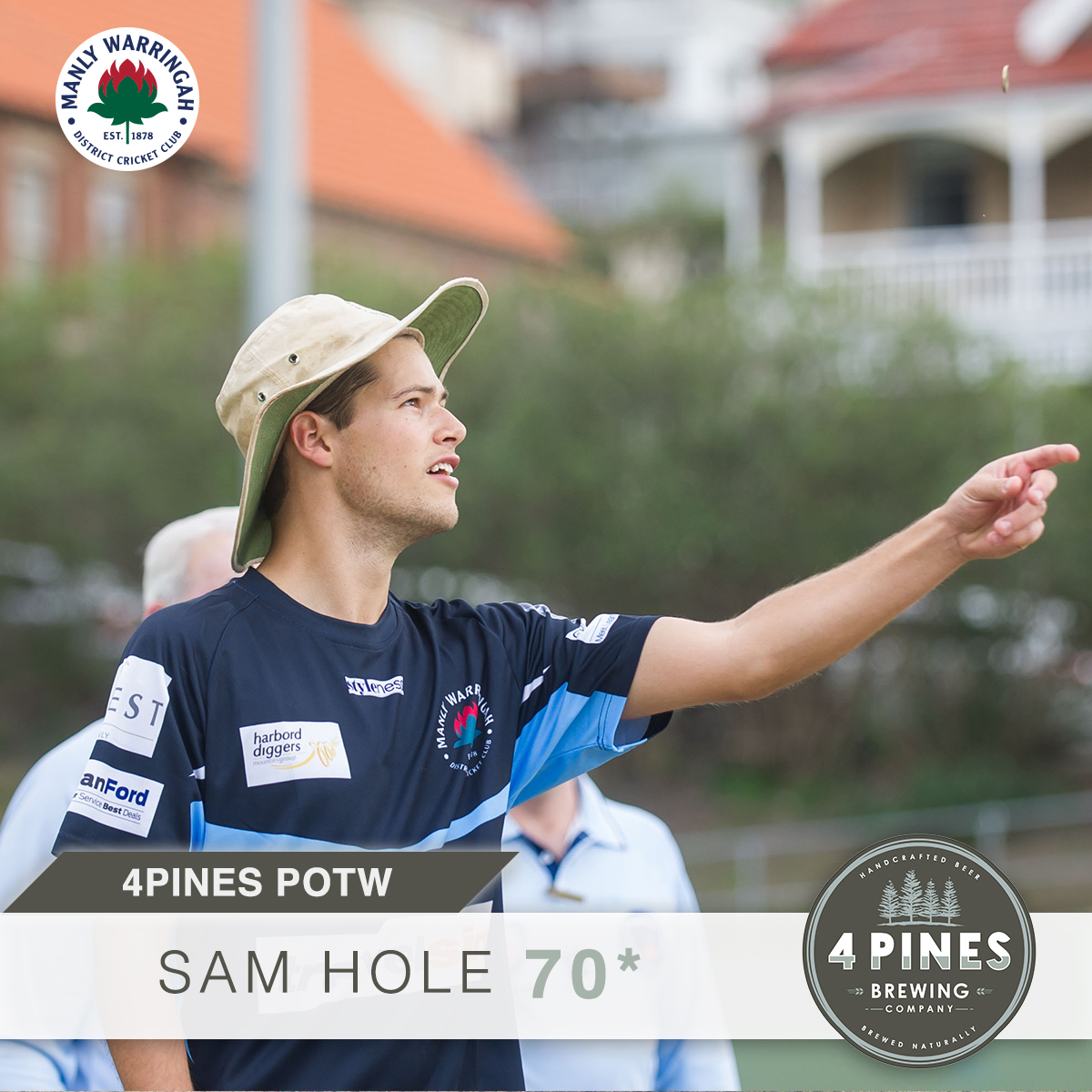 W e rocked up at Penrith on a day that was 32 in the city and 40 in Penrith. What a day to bring the heat into season 2017/18. That’s exactly what the Manly boys did, we produced the heat that the coaching staff have pushed all pre season to get. First off congratulations to Chris Green making his much anticipated Manly debut and he looked outstanding in Manly colours and the adorning fans that follow Chris everywhere made it the record breaking largest crowd a Manly first grade side has ever played in front of in Round 1. We lost the toss and Penrith batted and started well with score at 0/46 with balls racing everywhere. Enter Matt Alexander to knock over their hard hitting opener. At the other end T. Beatty produced a brilliant delivery with angle and seam to knock over the off stump of Ryan Gibson the current NSW Blues number 6. Taylor then took care of the next with a brilliant piece of work from James Crosthwaite to snare a one hander at slip to take Penrith to 3/68. Games in the balance and Manly boys are on fire out in the Penrith sun as Matty A, Taylor and The Cult Hero Micky Edwards terrorise the Penrith batsmen to have them totally melt under the pressure as we turned 3/68 into 8/88. We finished the job with Greeny taking the last wicket and his first for Manly with the score on 98. 4 wickets to Matty A, 3 to Taylor Beatty, 2 to the Cult Hero and Captain Green with 1.

The chase didn’t start well with Jay Lenton knicking one early. With the score 1/3 when the Crosthwaite brothers nicked and nudged what was a good bowling attack to get Manly out of early trouble and take the score to 43 and out of any danger of losing the game. James Crosthwaite skied a pull shot for 20 and then Adam Crosthwaite went to sleep and ducked a slower ball which he never saw to be hilariously judged LBW for 23. Greeny and Ahillen Beadle played beautifully to take the game away from Penrith with both making 20odd not out to take the bonus point win in the heat of Penrith. Manly 3/99 defeated Penrith by 7 wickets with a bonus point. A great start to the season and a very comprehensive win over last seasons one day premiers. A Great start to the year.

very disappointing loss considering we were the better side for 2/3 of the game. We loss the toss and bowled.  A majority of Penrith’s runs in the first 8-10 overs came through slices and edges through the gully and backward point region. We were a bit unlucky with how many runs they scored in the first ten overs but did occasionally bowl with to much width. Micky Visser got our first wicket cleaning bowling the opening batsman for 10 which was backed up by a brilliant run out to dismiss the danger man for 50 who looked like he might ton up. Tom Kaye and Joe Graham were introduced into the attack and slowed the run rate dramatically which was much needed. Tom finished with 3-17 off 7 and Joe Graham 1-25 off 10. Penrith finished with 7-188. Special mention to Joel Foster for picking up his first wicket for Manly and Micky Visser for his screamer of a catch.

Manly got off to a good start with the bat with Rawlings and Weston getting the lads off to a good start but both fell in quick succession with Rawlings 26 and Weston 19. Davies and Ritchie were both looking good in the middle before both losing their wickets when it looked like they were settled in. The majority of our dismissals were not up to 2nd grade standard and involved getting ourselves out rather than the opposition getting us out which will need to be fixed and improved if we are to play finals cricket this year. Sadly, we finished 39 runs short. 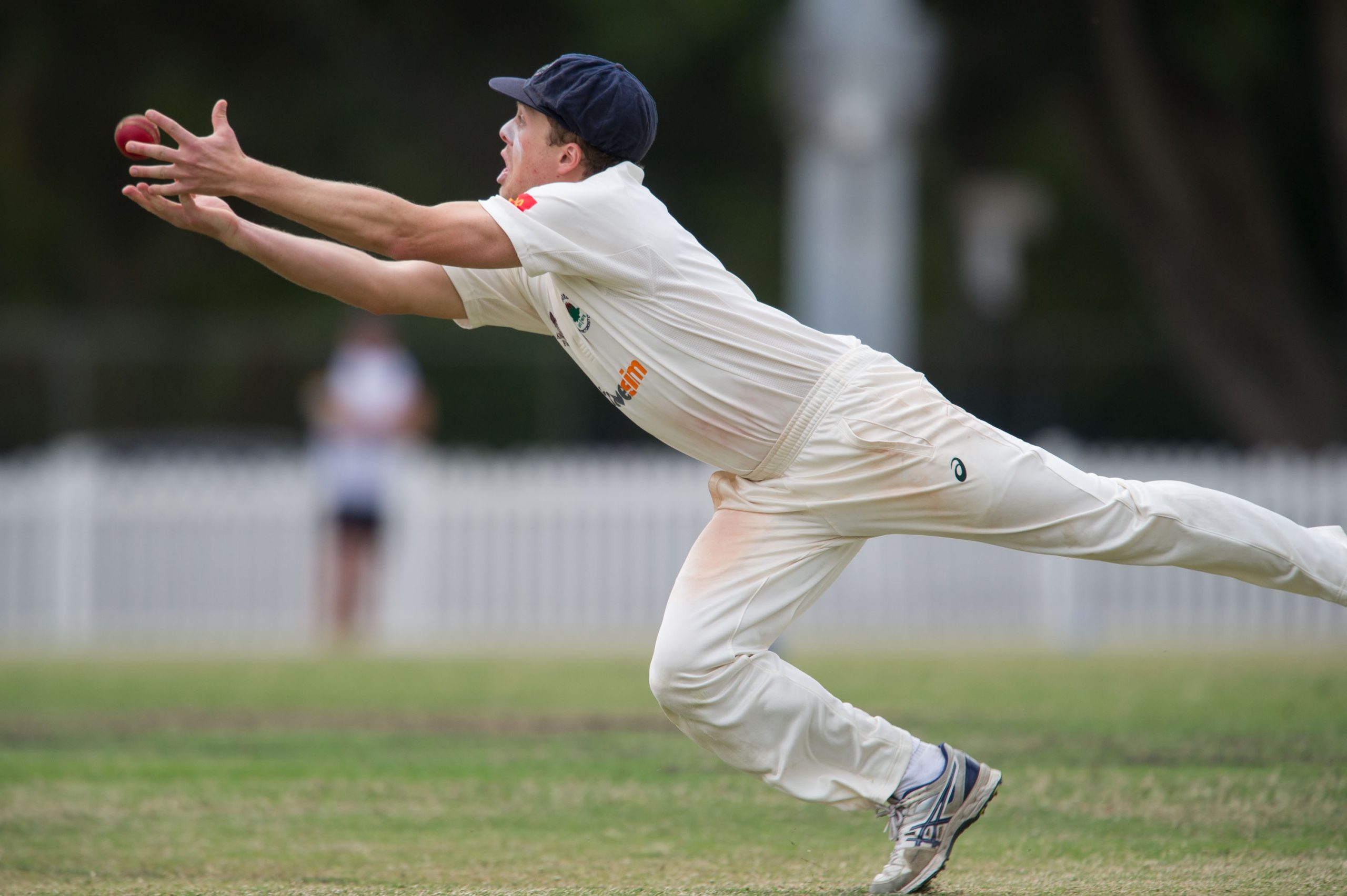 Micky Visser about to go horizontal 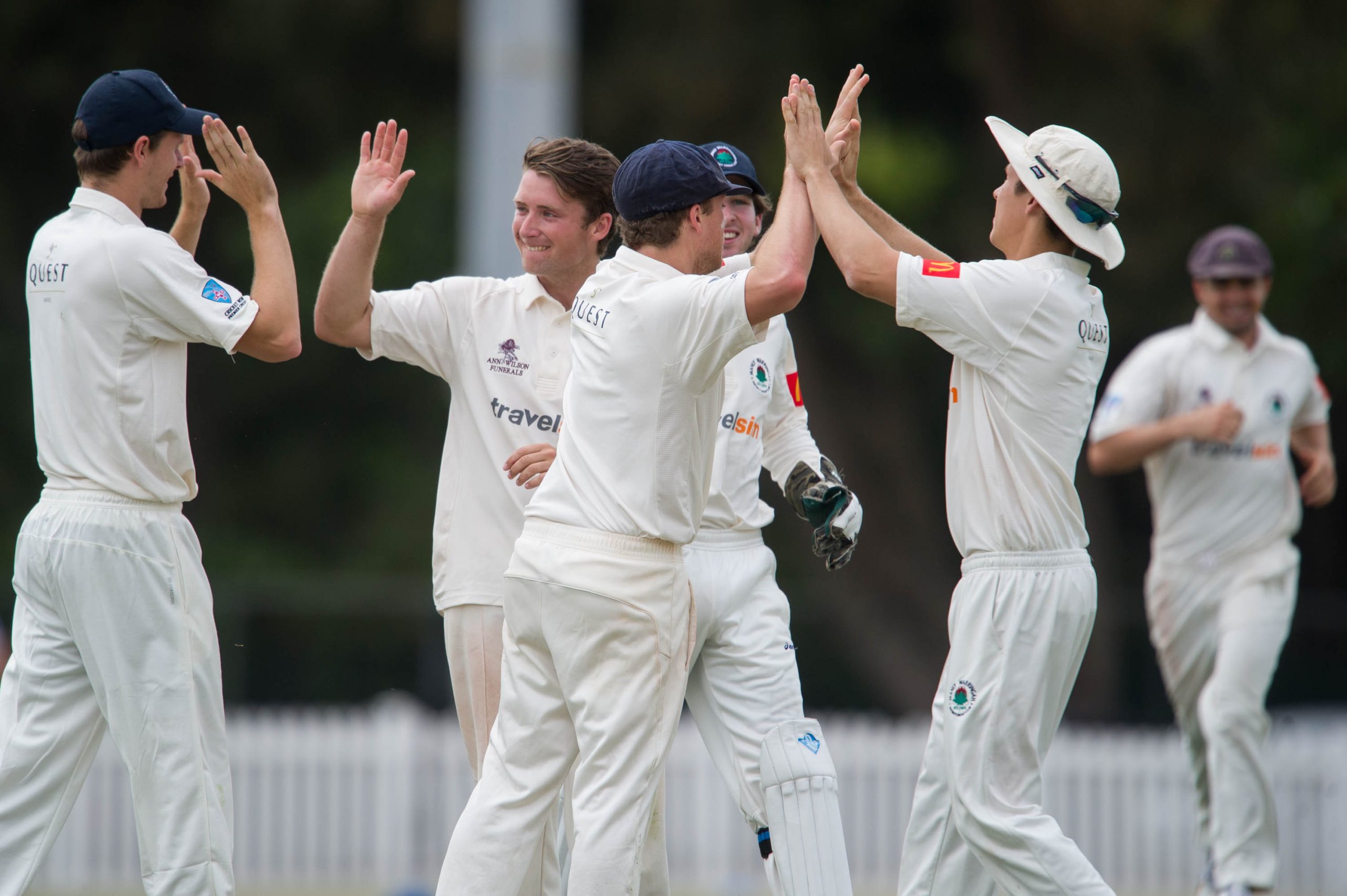 High-5s all around as Tommy Kaye snares a wicket 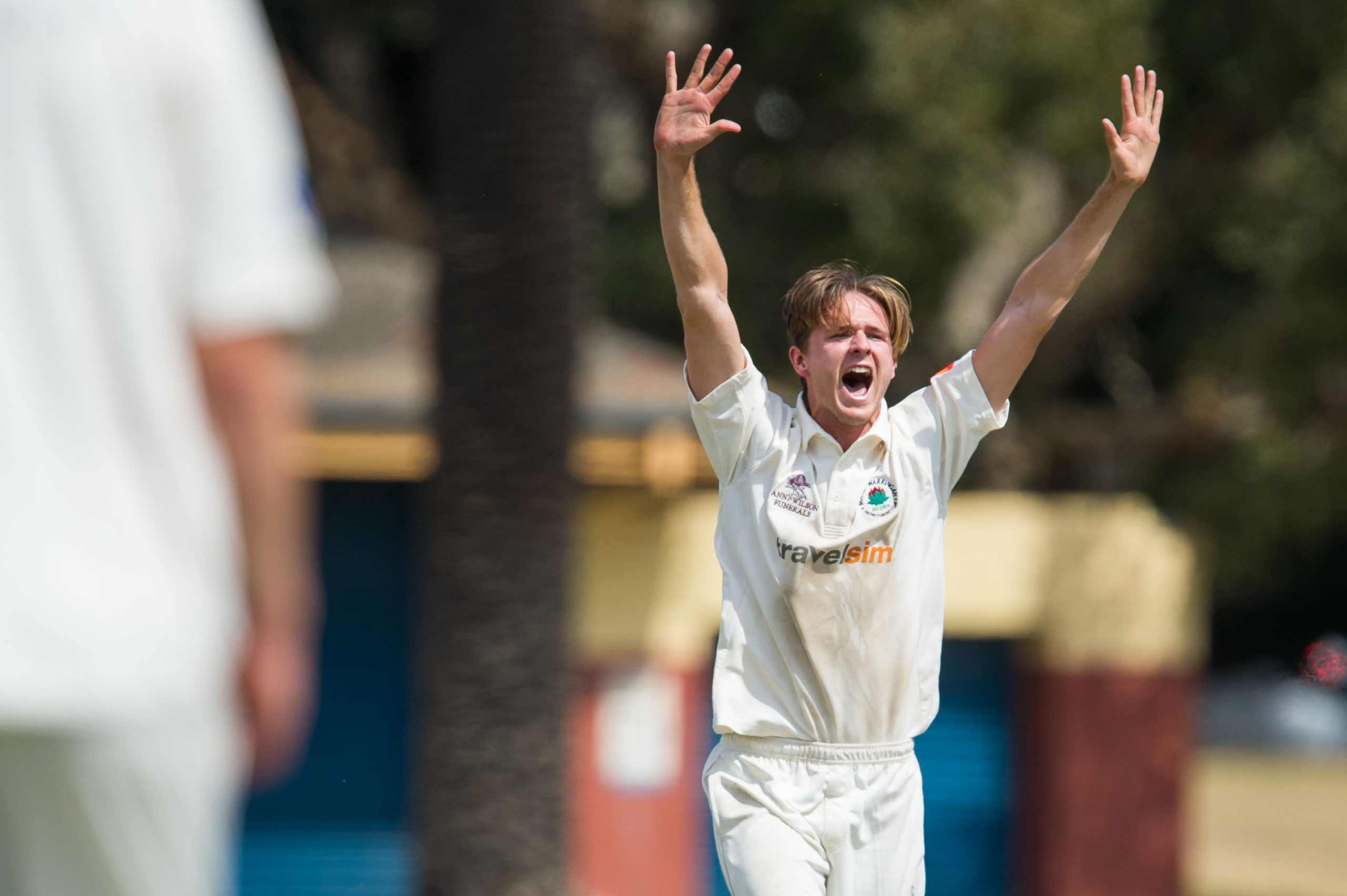 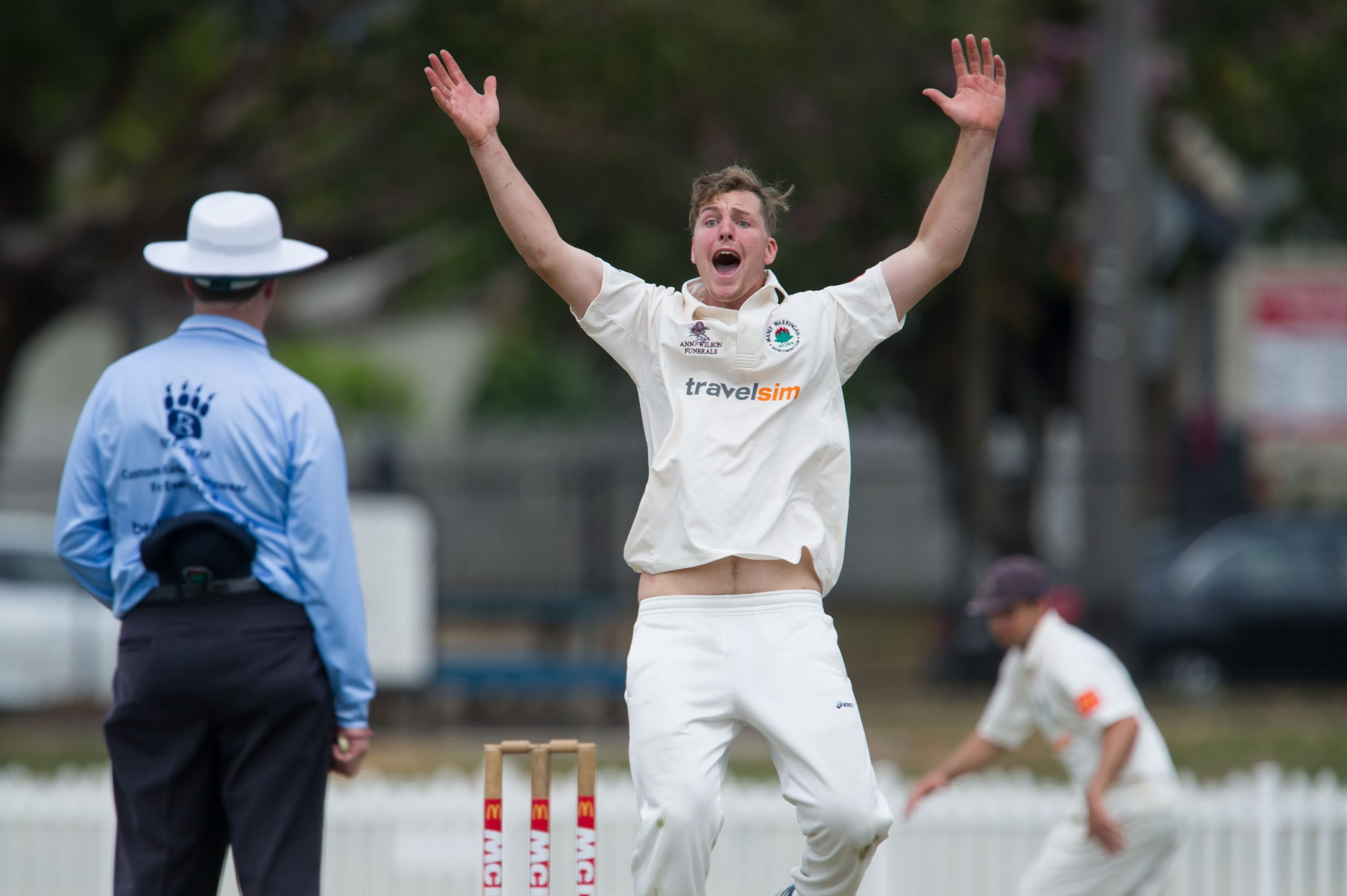 he first game of the season, 3rd grade travelled out to Penrith to play at Bill Ball Oval. We won a good toss and decided to bowl first on a pitch that had a bit of moisture early in the morning. Our performance in the field was great. Josh Wigney (2-32 off 10) and Andrew Jamieson (2-38 off 10) opened the bowling and started our innings on a high. From lots of dot balls, the pressure built and saw our first couple of wickets taken. Ben Watts debut for third grade and showed great maturity with his bowling and kept building lots of pressure from consistent lines and lengths (0-27 off 10). Ryan was our other star with the ball and was a machine bowling his 10 overs straight in hot conditions (3-20 off 10). We bowled Penrith out for 164 and were very happy with our efforts in the field. However, our batting let us down significantly. We struggled to build any partnerships and kept losing wickets in clumps. Sam Webber stood up with the bat and scored an unbeaten 49 runs and Ash Virdi showed some resistance with the bat (21), but most of the wickets taken by Penrith were from our batsmen getting themselves out. In the end, no one could hang around with Sam. It was an unfortunate day when the weather conditions favoured our side and with the talent in our team, 164 should have easily been chased down on a pitch that flattened out nicely during the day. I’m confident our team will move on from this game and come back stronger for next week.

ourth grade rocked up to a good cricket wicket for the first game of the season, Penrith won the toss and sent us out into the 30 degree heat to bowl first. Somerville bowled well on debut really tying down the openers before Matty Brewster jumped sky high and caught the opener trying to pull. Falconer got another early LBW and we were on a roll. Wilson came on and bowled tight and Sam Hole took a screamer to remove the opener. Isaiah came on and really tied up the middle overs bowling his 10 straight and had ended up with 3. Graham, Falconer, Wilson and Somerville all came in and took another scalp each and ended up having them all out for 158. Sammy Hole walked off with 4 great catches. Ross and Sammy Hole opened for us and Ross ended up sending one into the stands early, he ended up skying one on 22 and was angry he didn’t protect his wicket as much as he should have. Brewster came and went due to a good ball early and suddenly we were on the ropes. Sam really took it upon himself to be accountable and protect his wicket against the spinners and really looked to pounce on anything short as his innings went on. He was assisted by Pickering, Vumbaca and Akhurst but really himself and Graham took the game away from Penrith with 60 runs to get. It was a great start to the season and I hope that we can improve as the season goes on! 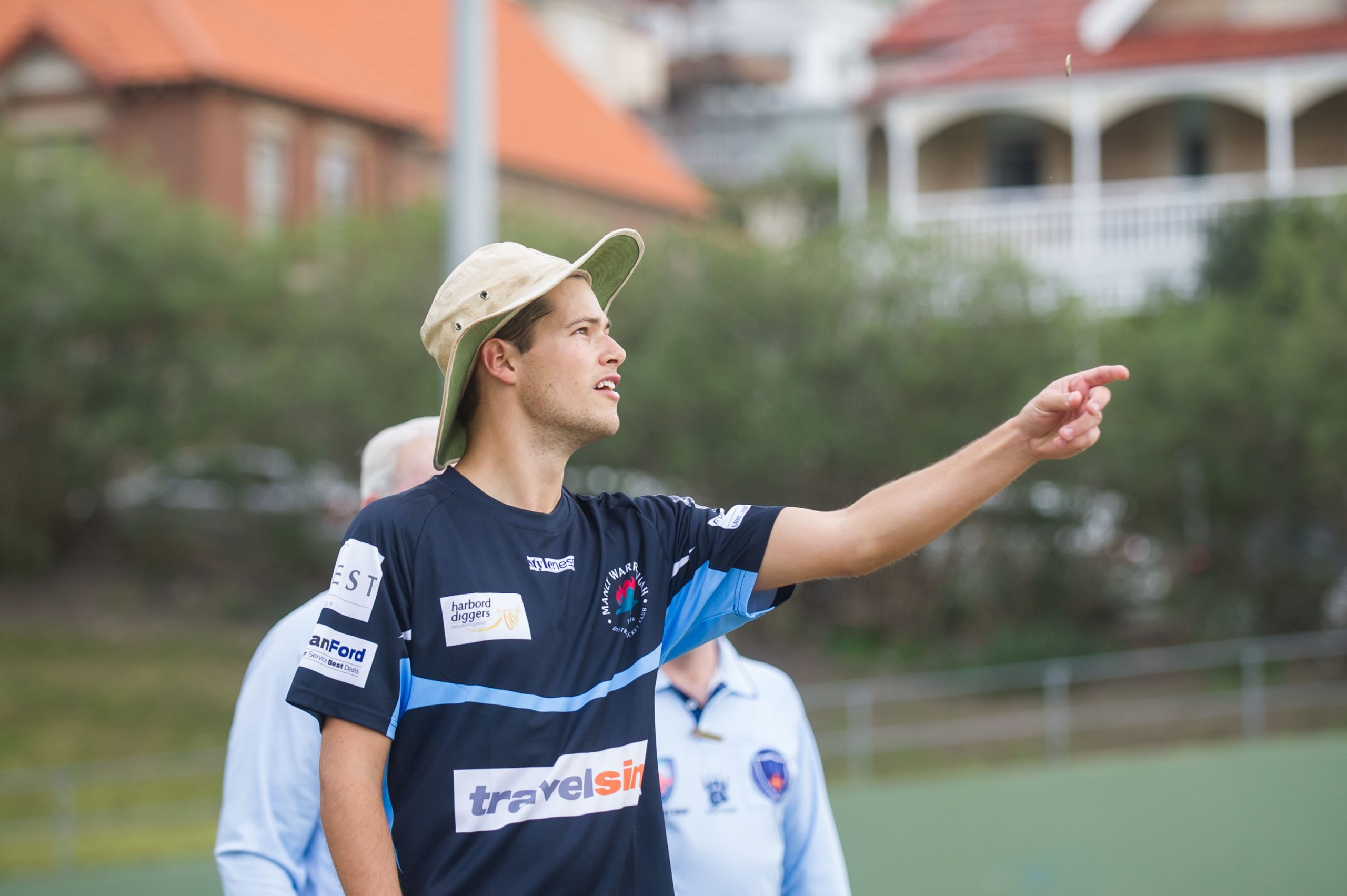 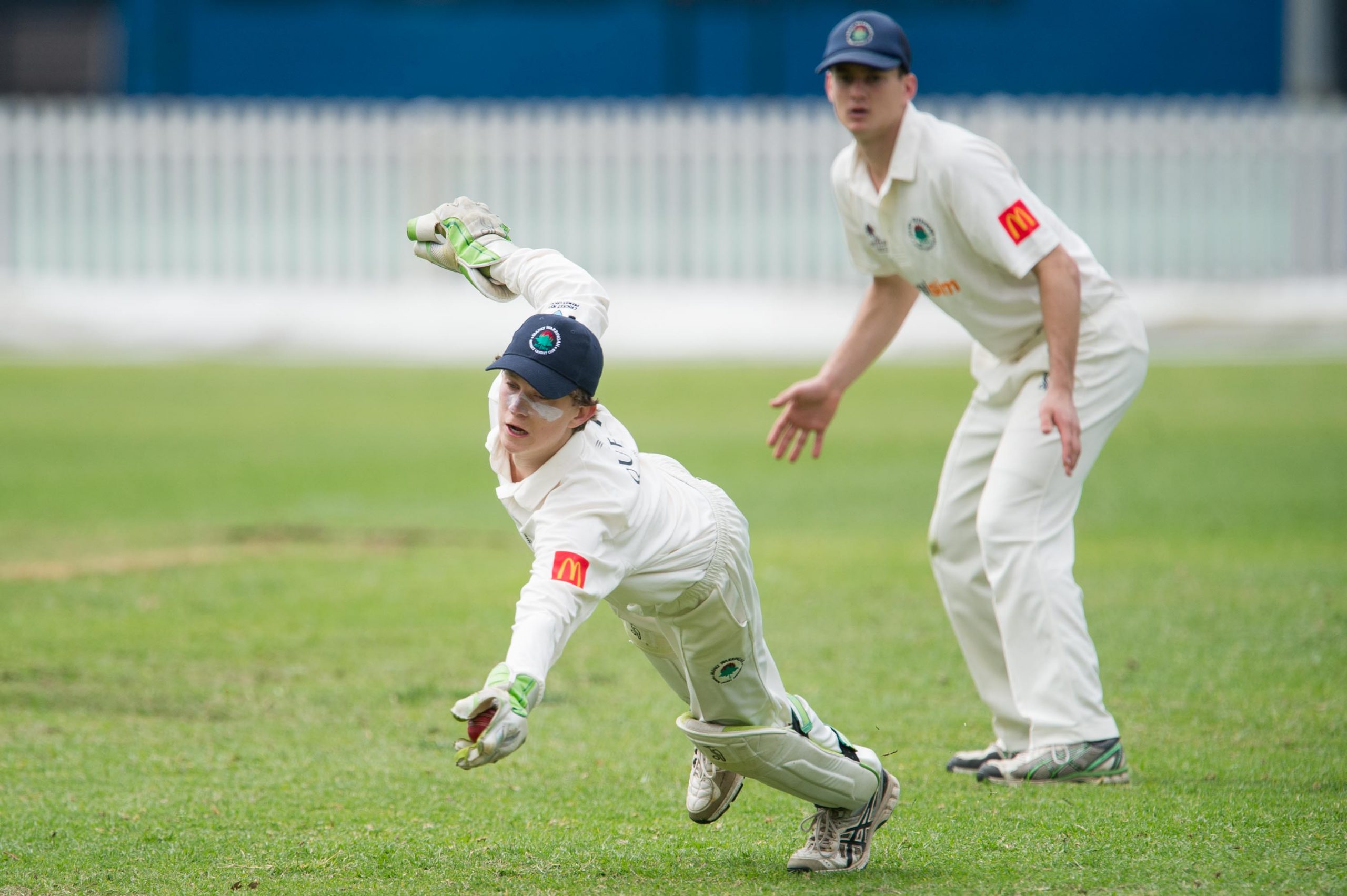 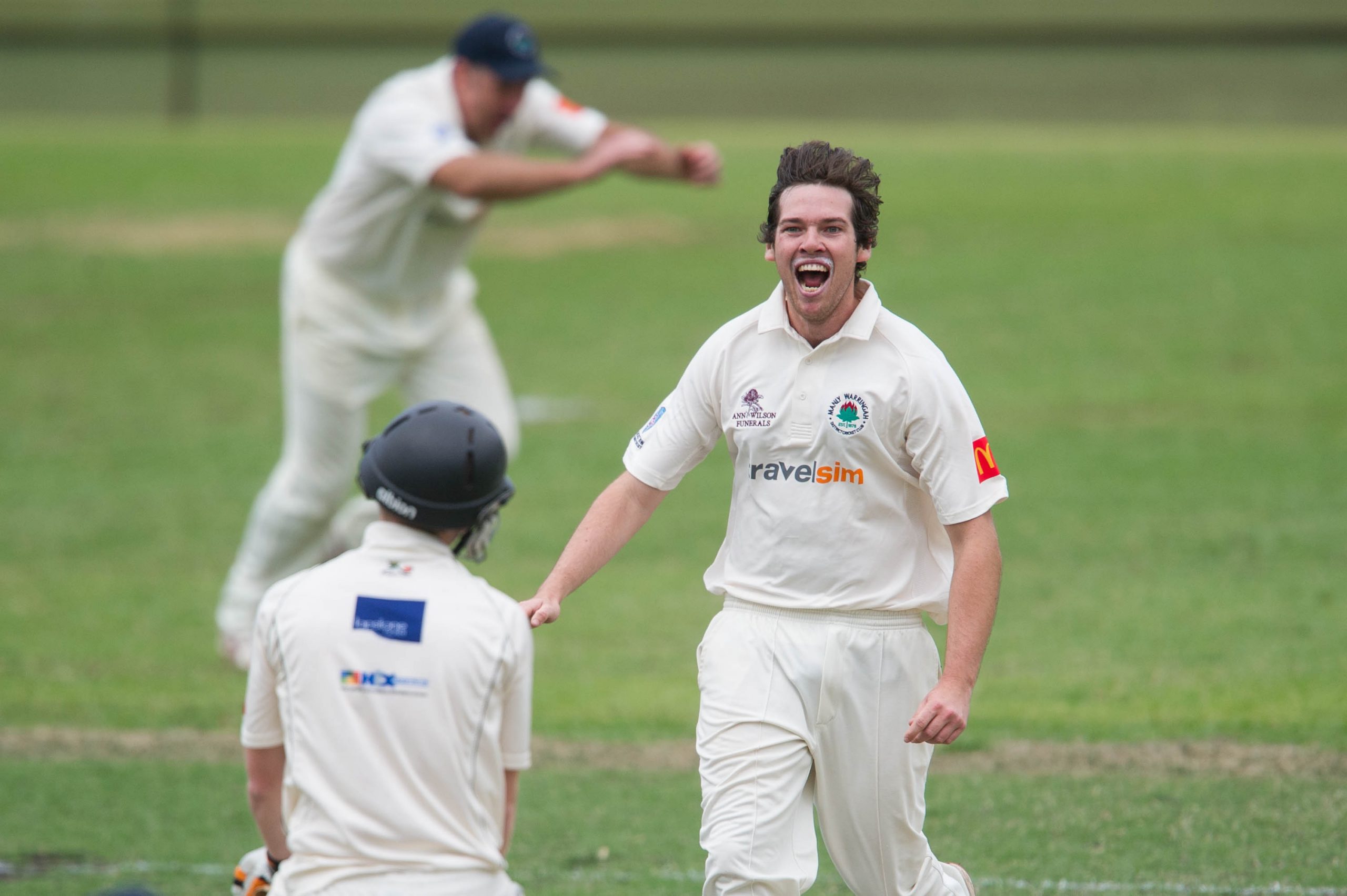 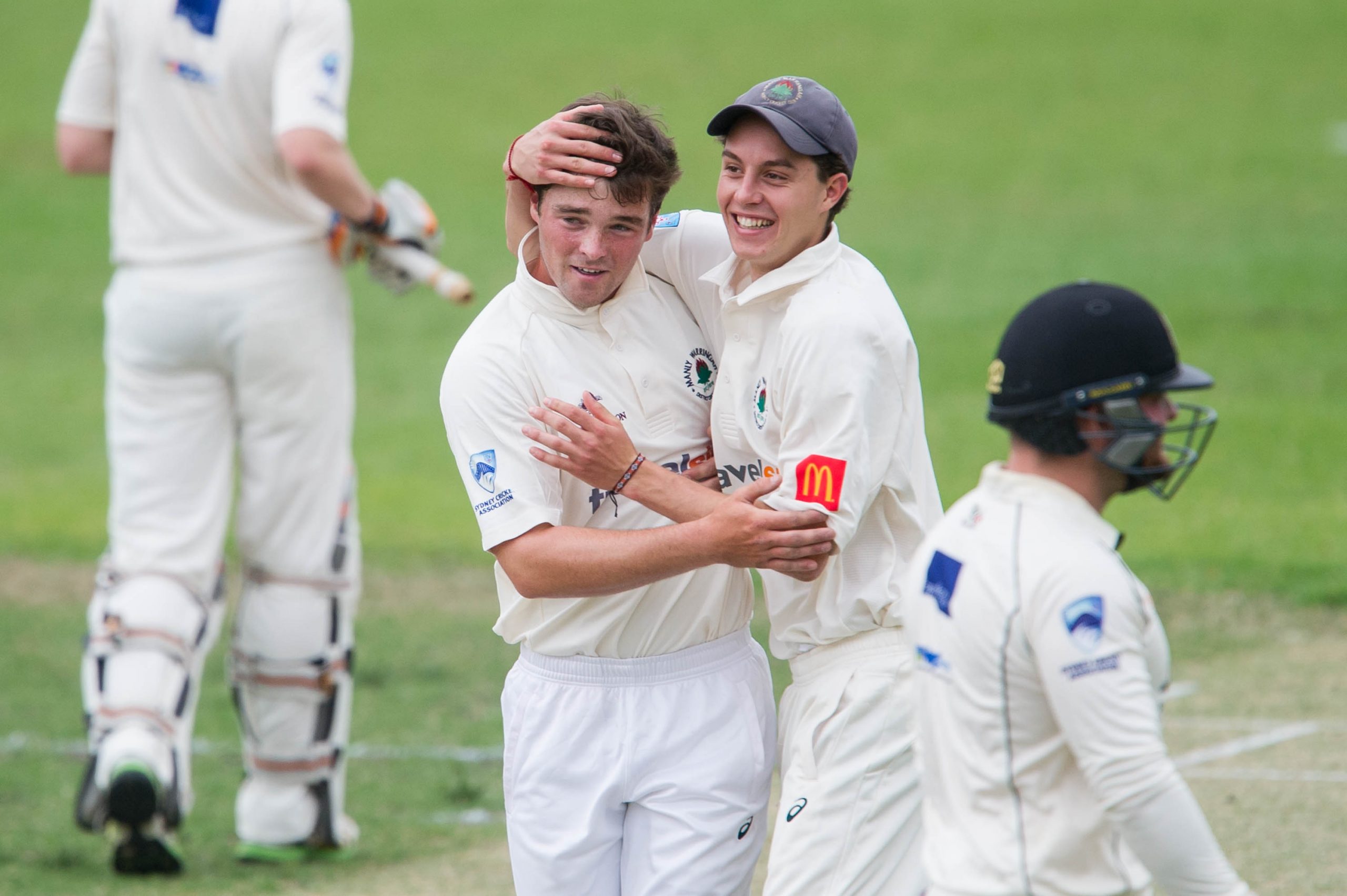 he boys rocked up to Rance Oval on a brisk Saturday morning, all keen to start the season off with our first win. Losing the toss on a green yet fairly hard wicket, openers Brynn Mendel and Nick Cohen started positively with 7 runs off one rock, 2100 was on the cards. However losing Cohen early followed by a few quick wickets before the first drinks break saw the Tahs 3-67, Bryn looking solid after several crunches over square leg. Losing a wicket right after drinks, Brynn stepped up playing his natural attacking stroke play before he was bowled for an impressive 51. A cameo from Aidan Bennett (23) came about as he carted the ball through the covers, and a little wag of the Archer and Counsell tail saw the Tahs being bowled out for 158 after only 41 overs. Confident we could defend 160, openers Michael Counsell (2-44) and Glynn Archer (1-15) set out bowling beautiful areas seeing the Penrith openers struggle to hit the ball off the square. In fact, merely hitting the ball seemed impossible seeing them at 0-15 off 9 overs. Debutant Aidan Bennett bowled superbly throughout the innings and got the first break through collecting the edge of the opening batsmen. A few dropped catches and boundaries later, Penrith seemed on top and managed to chase down the total with two over to go. Thank you to Roy, Shagges and Dougie who came out to support the boys and reinforce our potential to get the win in the next game. 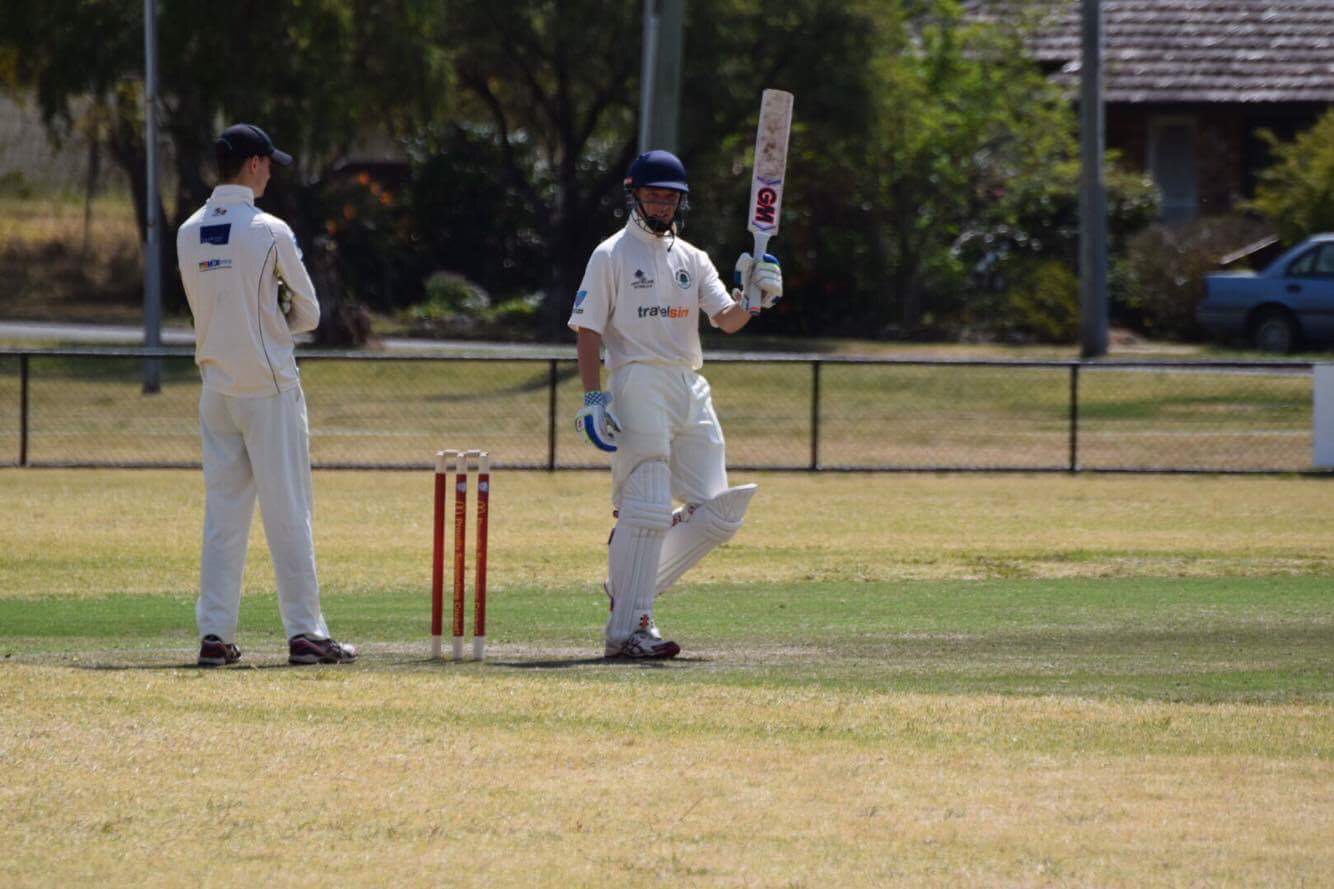 Brynn raising his bat on debut 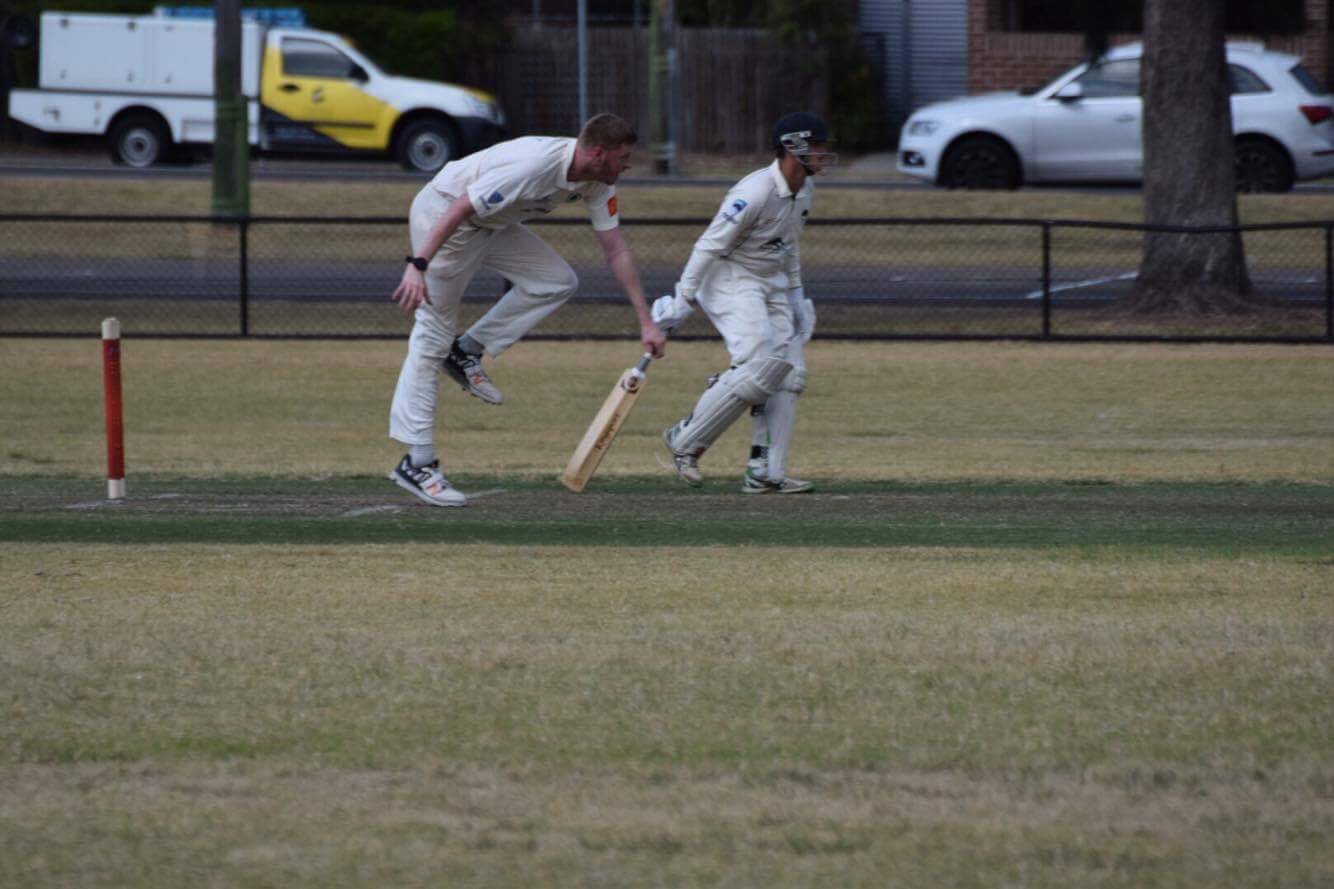 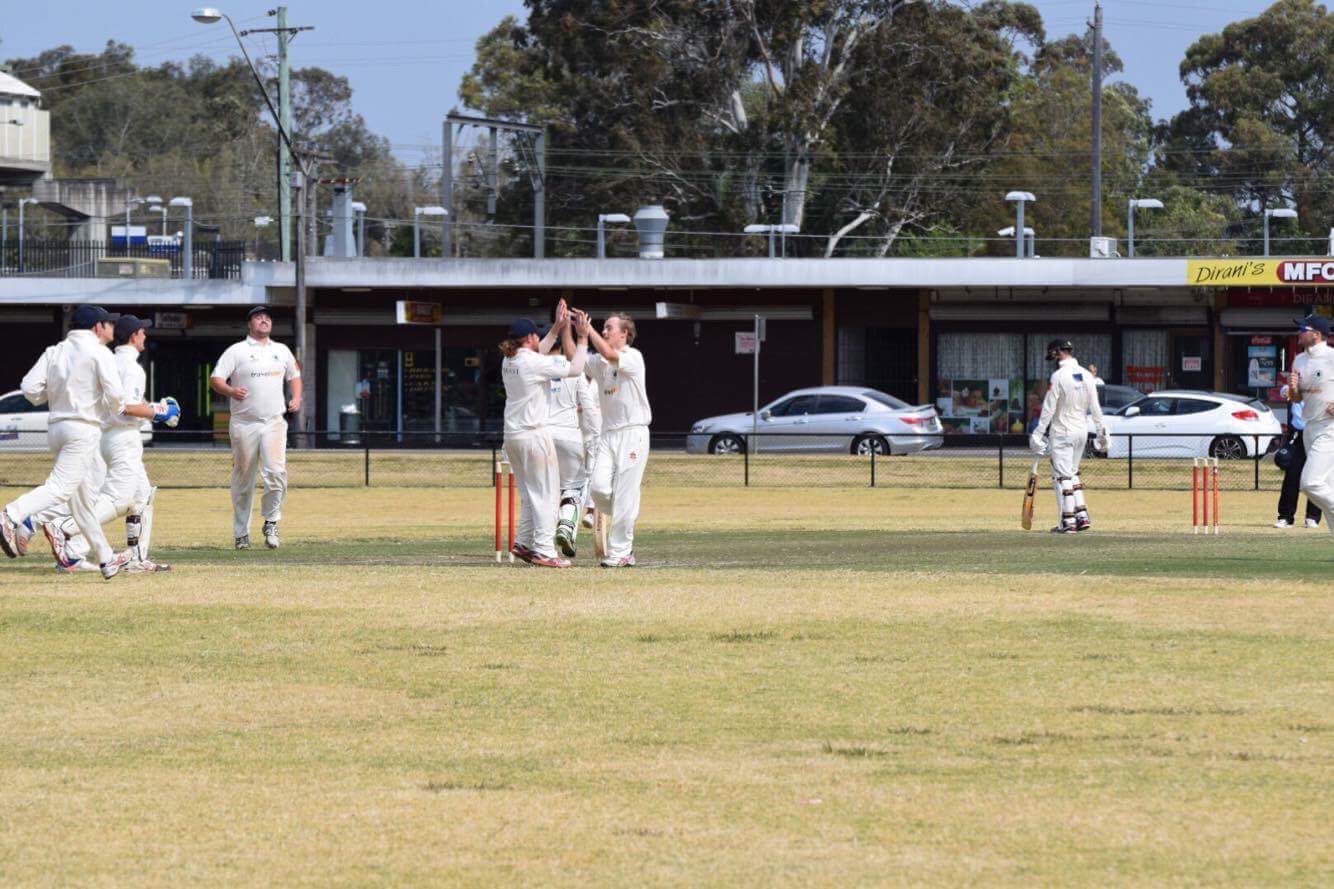 Team of The Week

O ur first Harbord Diggers Team of the Week for season 2017/18 sees a nice mix of experience and youth. Rawlings and Mendel open up the proceedings to face the new rock. The 4 Pines Player of the Week, Sam Hole comes in at first drop to play an inspirational role as always. A very handy middle order sees Davies, Webber, Green and Kaye all get the nod. Finally, a scintillating 4-pronged pace attack was chosen which sees Alexander and Bishop-Perret take the new ball with Beatty and Bennett coming in at first change. 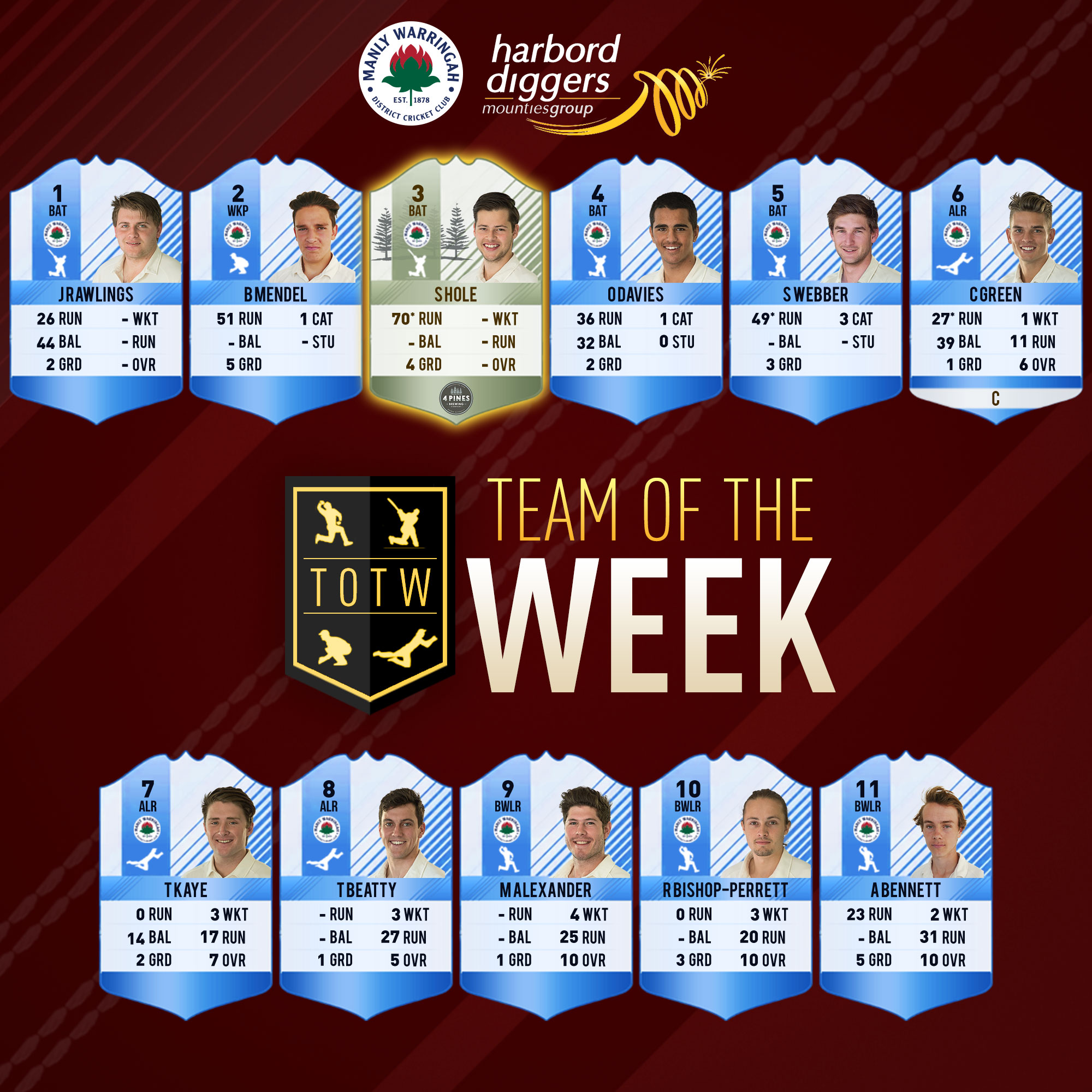