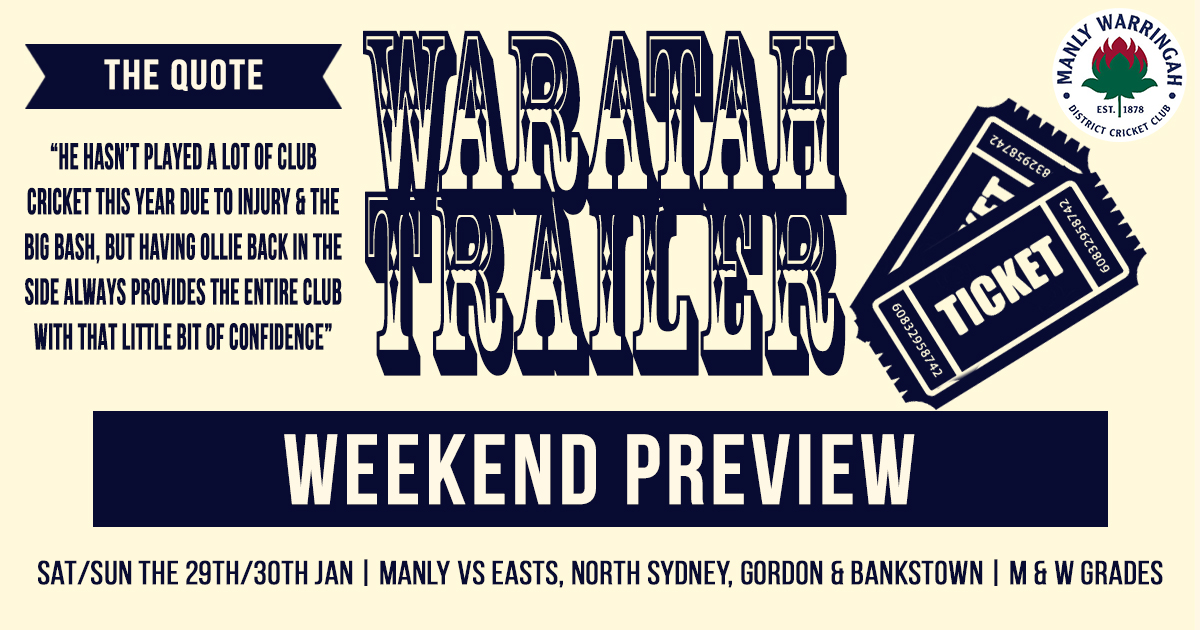 The Manly-Warringah Waratahs enjoyed one of their most dominant weekends in recent seasons winning all 10 matches across both the Women’s and the Men’s grades. Saskia Horley was the star of the weekend with a brilliant 98* and 3/7 in her teams win in 1st grade. Men’s 1st grade skipper Ryan Farrell led the way with an anchoring 90 which was well supported by Ahillen Beadle again in the runs with a solid 62.

This coming weekend the Women’s grades will be looking to continue their momentum as they take on Gordon and North Sydney across the grades. 1st grade upset the ladder leading St George-Sutherland last weekend which has now put them just two points behind the 4th placed Bankstown. Whilst Saskia Horley has been the standout performer throughout the season, skipper Mikaela Turik has been as consistent as ever averaging 29 with the bat and 18 with the ball. Chelsea McLerie has been in outstanding form with the bal this season and currently sits equal 2nd in the leading wicket takers ladder for the whole competition. Their opponents Gordon have struggled this season and are still looking for their first win, the Girls will be looking for a strong performance as they push for finals cricket.

2nd grade grabbed a much-needed win last round and will be hoping for another win to jump off the bottom of the table. Niamh Bullen was fantastic at the top of the order last week with a run a ball 52, Kristie Crawford then backed the batting performance up with 3/18 off her four overs. Crawford and Claire Waddington have taken 9 wickets each this season which has them inside the top 5 on the leading wicket takers ladder. If they get the points this round, they’ll go ahead of their opponents as they look for a strong finish the season.

The 3rd grade girls leapt into 4th position after a great win against Campbelltown-Camden at Raby Oval last round. Michelle Cox made her first appearance of the season and impressed whilst doing so, scoring 30 not out with the bat and then taking 2/11 with the ball. A win against the 8th placed North Sydney might give them the chance to jump into 3rd position at the completion of the round.

As we take a look at the Men for this weekend, they will be facing Eastern Suburbs now all in a one-day fixture after a change to the schedule. The first-grade side could be with a number of returning players this weekend, Ollie Davies is expected to line-up, whilst the Edwards Brothers and Jay Lenton are also a chance to return. Ollie Hasn’t played a lot of cricket this year due to injury and the Big Bash, but having him back in the side always provides the entire club with that little bit of confidence. After back-to-back bonus point victories, 1st grade now sit pretty in 4th place and are just 3 points behind Randwick-Petersham in 3rd.

Andrew Jamieson’s 2nd grade side has unfortunately been hit hard with Covid for the clash with the 6th placed Dolphins. So across the lower grades their could be a number of players given an opportunity in a higher grade this weekend. Tom Kaye’s swing bowling has been almost unplayable again this season as he averages a very respectable 18 with the ball and will be a key member for this week’s match.

3rd grade will be looking to back up their bonus point win last weekend and jump into the top 6 when they face fierce rivals, Easts. These two sides have met in a number of big games in recent years and the Manly boys will be hoping for a positive result this coming weekend. Captain of the main grade Sam Hole has been in brilliant form this season averaging 40 with 324 runs to his name. Another key member of the club Jordan Daly was back to his damaging best against the Ghosts with 61 not out of just 44 deliveries. Jordan is one of the hardest trainers at the club and is primed for a strong back half of the season.

Our table topping 4th grade side continue to impress but face a tough challenge at Graham’s Reserve this Saturday taking on an Easts side looking to crack into the top 6. Andrew Rochford is leading his side with his actions this season and is currently the leading wicket taker in the 4th grade competition with 22 scalps. Jack Pickering has returned to the club after a few years missing and is straight back in the runs with a match winning 78 not out last weekend. Jack has always showed a lot of talent, and will be a key member of our club for the run into the finals.

Reiley Dunlop and his team has jumped back into the top six and have a chance to make a huge statement with their clash with the 2nd placed Dolphins. Hayden Calvert is enjoying a breakout season for the club with 227 at an average of 32. Young country left arm orthodox bowler George Cumming is one to keep a close eye on over the coming weeks as he settles into his first season with the club. Bowling from great height, George is able to get a lot of spin and bounce which is already causing some concerns to top grade batters in the nets.