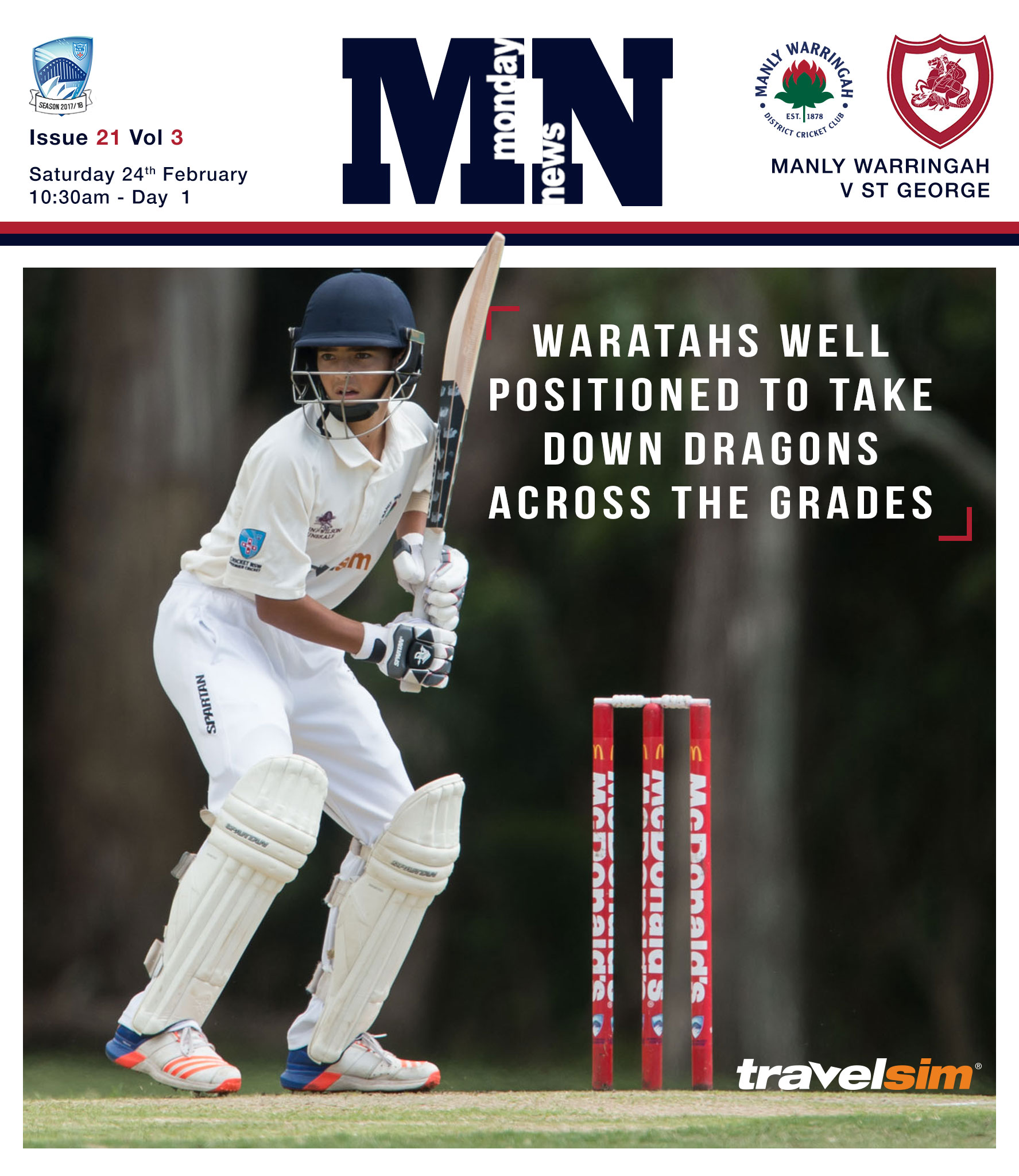 Day 1 of the penultimate round has seen the Waratahs perform very strongly across all grades, setting themselves up for a shot at victory next weekend.

It was always going to be an important round in the race for the club championship, with Parramatta facing an ever improving Easts club that will give them a real run for their money.

With St George being well hit by injury and rep duties this season, there was an opportunity to close the Club Championship gap. The performances from day 1 have put us in a great position to do this.

the batting was a highlight in a number of grades, with big centuries to Logan Weston, Tom Kaye and 14 year old Joel Davies.

Logan and Tom also broke the 2nd grade 4th wicket partnership. Their 236 run partnership went past Scott Patterson and Javed Badyari who put on 210 in the 2011-12 Qtr-Final against Campbelltown.

It was also great to see Joel Davies score his first hundred for Manly in 5s. He is such a great little talent who fought back from a few setbacks recently. He will score many more.

At the other end of the grades, Joel’s brother Ollie is on the cusp of his first 1st grade century, stranded on 99* after lightning stopped play.

3s and 4s both put in great bowling displays with 4s on the cusp of victory, while 3s having a run chase that they are expected to achieve easily.

So it sets us up for a big 2nd week. With Parramatta in a real dog fight with Easts, if we play our cards right, we could come out of the weekend at the top of the Club Chap table. Plenty of cricket still to be played though.

What can you say about Logan’s innings. It was one of pure class as well as patience. He has had a good year but There has always been a linguring through that if he got the right day he could really dominate for long period.

That happened on Saturday, with Logan hitting his highest score for the Waratahs and the first double century for the club since Adam Crosthwaite’s 201 in 2014/15. It’s also the highest 2nd grade score since 261 from Craig Glassock in 2001-02.

Coming in at #3 in the first over of the day, Logan was brutal on anything short but also played very straight. As is his usual way, he hit the ball hard and looked to dominate the bowling from his first ball.

A great knock, and everyone who was at the ground to witness it won’t forget it in a hurry. 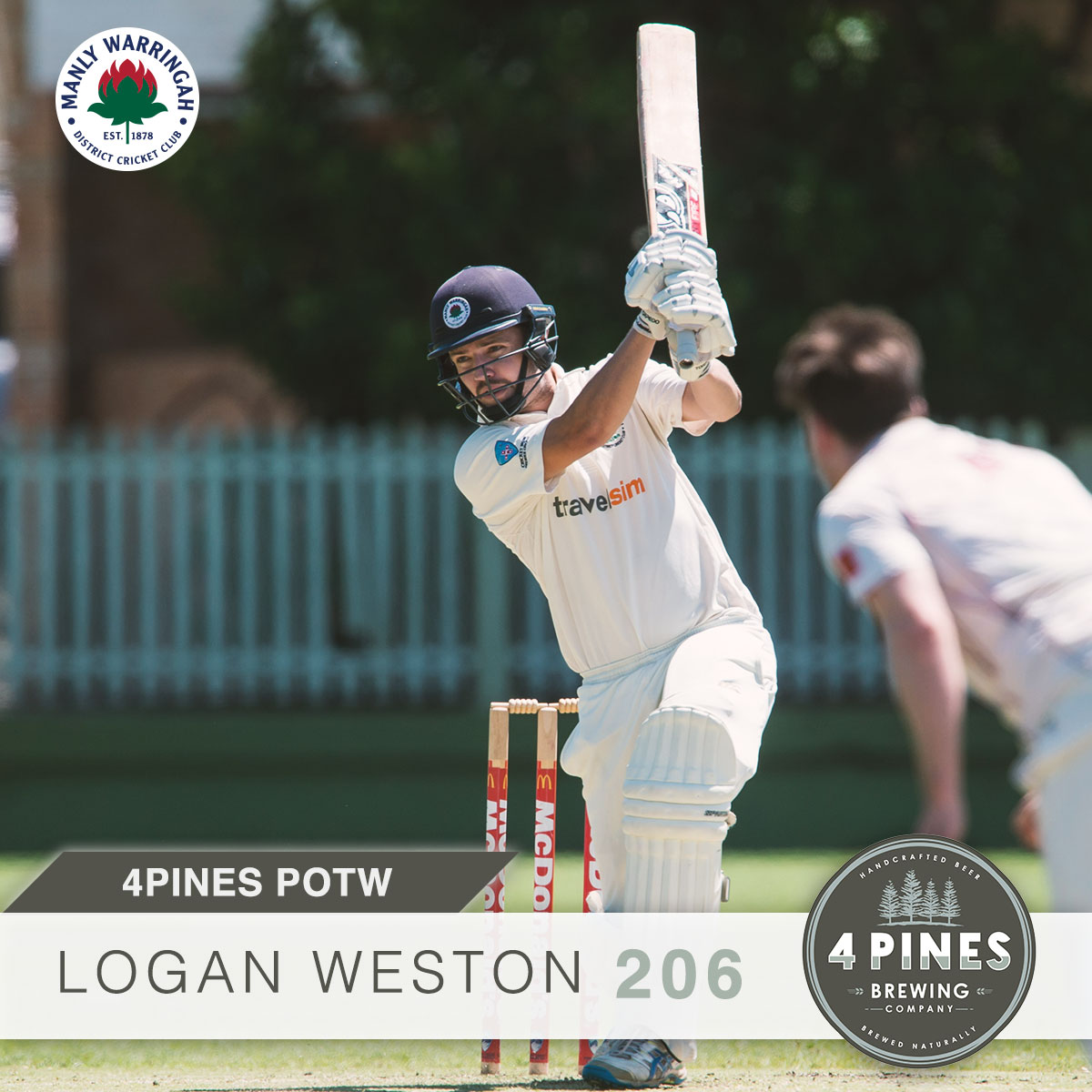 t was an away game for the 1st grade boys at beautiful Hurstville Oval and after losing the toss we were sent in to bat.

We lost the early wickets of Jack Edwards and Adam Crosthwaite, however James Crosthwaite showed his class yet again while playing his aggressive brand of cricket and hitting the ball to all parts of the ground.

Jay Lenton and Ahillen Beadle both looked promising with the bat and getting starts then both being dismissed in the 20s.

Skipper Cameron Merchant and young gun Ollie Davies then combined for a 131 run 6th wicket partnership to consolidate the innings in a tricky period that could of determined which way the innings was to go.

Cameron was dismissed for a well earned 57 while Ollie Davies continued to go about his business. Joel Foster and Jake Carden both fell for not many and Nick McLachlan then stuck around with Ollie.

As the 17 year old was closing in on his first, first grade century, the game was delayed for a mandatory 30 minutes for lightning. Unfortunately a heavy downpour of rain ensured that we weren’t to get on and Ollie delayed for a further week for his chance to reach 3 figures in what has been a brilliant display of batting so far and an innings that showed maturity, skill and composure well beyond his years.

In a day where the Tahs stuck in during tough periods some tough batting by some of the boys puts us in a competitive position heading into next week.

he boys turned up to a picturesque Manly Oval and were ready for a great day. First into the ground the boys got into the standard touch game was rife with controversy as Sweet Chilli Willy refereeing was once again suspect. Nonetheless, we moved on and with Gainsy winning the toss, the boys were batting on a great looking deck.

Unfortunately we lost ralphy early, which brought Logan to the crease who put on one of the greatest displays of batting this club has ever seen. Logan was aggressive and got himself in quickly and punished there bowlers to all parts of the ground and moving at a fast rate and bringing up his fifty well before lunch. At the other end cubby was batting patiently until he was unfortunately out lbw, as saints went bang bang on the stroke of lunch, with faz also being given out lbw before the break.

After a couple of well deserved sandwiches Logan returned to the crease with tommy Kaye accompanying him. The two put on an awesome partnership, playing some patient yet aggressive cricket together. Logan brought up a well deserved 100 with a massive six over cow corner just after lunch and the boys continued to punish the saints bowlers. The boys batted perfectly for the middle session and came off deserving a good feed from a very good second grade tea. Well done boys.

After tea the boys went out with the intention of scoring quickly and Tommy and Logan didn’t disappoint. After bringing up there 50 and 150 respectively, the boys really stepped up the pace and started hitting boundary after boundary, with both men racing towards there next milestones. Logan brought his 200 with back to back sixes and earned a well deserved standing ovation from the crowd. Unfortunately Logan got out soon after and was clapped of the ground after making a chanceless 200, in one of the greatest batting displays the boys had ever seen. Bariol joined Tommy and started smacking them everywhere, as Tommy played patiently towards his 100. As Baz was hitting boundaries, the scorers started to confuse themselves and despite some clerical errors, Tommy brought up his very well made 100 and soon after we declared at 4/388.

The boys came out firing and had two wickets form the first two overs. Soon 2 became 3, then 3 became 4 as the boys were right on top. Another wicket was taken as the boys finished the day with saints on 5/28 with Jamieson and Hicks taking 2, and Wigney 1.

The boys will be looking to come out firing again next week and pick up a possible 10 points.

hird grade rocked up to Olds Park with the mentality of an outright win to be the only real hope of making finals.

Opening the bowling, Javed Badyari and Mikey Counsell had the ball moving off a beautiful length like a frog in a blender through which Javed took the first wicket to a screamer  in gully by Sam Hole.

After a run out and a well deserved LBW to Counsell, the lads aimed to choke any easy runs through quick spells which payed off as Javed claimed his second during his third two over spell with a smart catch in mid wicket by the better graham.

After a small 4th wicket partnership, Ben Falconer broke through as a result of pure pressure allowing Ryan Bishop-Perret and Isaiah Vumbaca to bowl with attacking fields resulting in another run out off RBP’s bowling as the batsmen seemingly hated his crease, blocking a ball back to RBP as he ran, dove and took out the stumps.

Izzy’s tight bowling also payed off as he claimed the wicket of the in batsmen taking a one handed diving caught and bowled described by Javed as “bloody insane”.

Jacob Graham managed to clean up the tail leaving the lads 120 for the 6 points.

Sam Webber went out to face one ball however lightning and thunder ended days play.

he 4th grade boys turned up to Graham’s Reserve on a warm and humid day eager to keep the momentum rolling after last rounds win against Parramatta. We knew we had to keep playing our best cricket leading into the finals and after a solid warm up where the touch footy honours were evenly split, we got down to business.

Skipper Walter lost the toss and we were asked to field. Brad Wilson and Glyn Archer opened up for the Tahs and we quickly found the breakthrough with Brad finding the edge and Walter taking a sharp catch in the slips. This set the standard for the rest of the session as Brad found the edge again with Dom taking one of the all time one handed flying catches in gully.

An early introduction of spin worked for us as Sam Alexander continued his hot form and quickly outclassed their batsmen to add 2 more to the wickets tally.

At 5-40 the Manly boys were on top and Jimmy Crombie and Alex Bain continued to build the pressure from both ends with Bain finding his lines to rattle the stumps. Spin was reintroduced and Dom took his second classic catch of the day with a great running back catch over mid on.

The bowling group finished off the job with Glyn taking the last two wickets to bowl St George out for 85.

We lost Nick early in our run chase as Dom and Will went about chasing the runs. We then lost Will and at 2-20 Zach and Dom steadied the ship.

Zach fell for 16 and at 3-40 Waltz joined the crease and quickly showed his intent with a few big shots. Dom batted well for his 20 but unfortunately fell late in the day chasing quick runs which allowed Crombie and Walter to see out the day and finish on 4-64. A big day next weekend where we’ll look to chase down these runs quickly and look for an outright win.

Special mention to Samoz with 4 wickets and Brad for 3 which has helped us to be in the position in which we are at stumps.

th grade had a pearler start in day 1 against the dragons.

On a very flat but rather quick wicket, skipper Geoff “Shaggers” Isaacs won the toss and decided to bat first.

We all thought it was rare scenes when St George opened up with a leg spinner but it proved to be effective for them getting the wickets of Lucius and Mendel.

That brought Ross Trewartha and Joel Davies to the crease. With some amazing class and power hitting, Rosco was dispatching the bowlers to all parts and scored a quick 78. And then there was Joel, batting out most of the day playing some insanely good shots to help put us in the box seat getting 101 not out.

Shaggers and Aidan Bennett also put on cameos to help assist us in reaching 278 off 60 overs.

We went out to bowl having 18 overs left in the day. Ninness and Seward opened up and had the ball carrying through to the keeper nicely on the quick wicket but were unable to get a break through.

After rain hit we only bowled 6 overs at them and will need to wait till next week to seal the points! Good solid day for the Tahs.