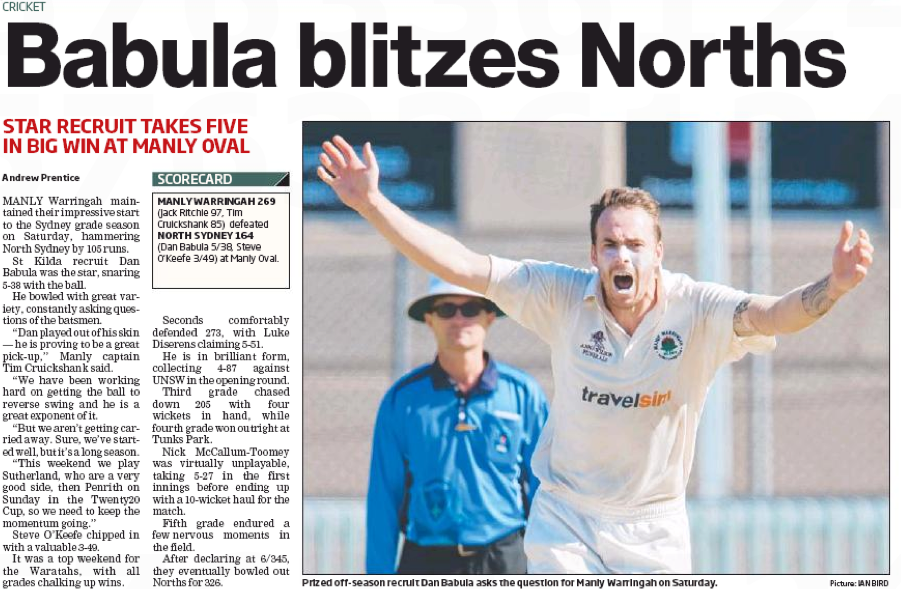 St Kilda recruit Dan Babula was the star, snaring 5-38 with the ball.

He bowled with great variety, constantly asking questions of the batsmen.

“Dan played out of his skin — he is proving to be a great pick-up,’’ Manly captain Tim Cruickshank said.

“We have been working hard on getting the ball to reverse swing and he is a great exponent of it.

“But we aren’t getting carried away. Sure, we’ve started well, but it’s a long season.

“This weekend we play Sutherland, who are a very good side, then Penrith on Sunday in the Twenty20 Cup, so we need to keep the momentum going.”

Steve O’Keefe chipped in with a valuable 3-49.

It was a top weekend for the Waratahs, with all grades chalking up wins.

He is in brilliant form, collecting 4-87 against UNS Win the opening round.

Nick McCallum-Toomey was virtually unplayable, taking 5-27 in the first innings before ending up with a 10-wicket haul for the match.

Fifth grade endured a few nervous moments in the field.

After declaring at 6/345, they eventually bowled out Norths for 326.