Our Round 4 fixture vs Mosman has started off slowly with some disappointing batting performances in both First and Fifth Grade. However solid bowling performances in 2’s, 3’s and 4’s sees us head into the second week with a great chance of victory.

Our first grade side started off strong before a big collapse saw the visitors bowled out on the stroke of tea for 159. They fought back hard to have Mosman 4/135 over night however they still have plenty to do to claw back into the match. Second Grade were lead well by newcomer Elliot Herd as he took his debut 5 wicket haul for the Tah’s. Gainsy’s men will be chasing down a further 263 runs as they are 1/29 in pursuit of Mosman’s 292.

The Main Grade had another great day with the ball bundling Sutherland out for 160 with Wilson and McLachlan doing most of the damage. Fourth Grade also had a great day, bowling Mosman out for just 144. Jacob Graham was once again the pick of the bowlers grabbing 4 wickets. Gummer’s men are 1/13 overnight with the skipper still at the crease accompanied by Manly cricket’s Rahul Dravid – Dominic Wheeler. Our Fifth Grade side had a day to forget after being bowled out for just 21. Mosman well and truly ahead of the game at 6/168 overnight. Plenty of work to do for our 5’s side to prevent an outright victory. Batting woes continued on Sunday with our PG’s side coming up 2 runs short as they were unable to chase down Fairfield’s 8/85. Bain and Foster lead the attack well taking 2 & 3 wickets respectively. Despite the loss, our PG’s still remain alive as they are only a win away from jumping back into finals contention. With the 20/20 matches now complete, our boys will be eager to find some form in the 50 over format and roll on into the finals.

Our 3rd Grade Women’s side also unfortunately went down to a strong Gordon outfit. After Gordon posted a strong total of 258, in form batsmen Guyot batted beautifully for 47 and was well supported by James who also batted well for her 39. Unfortunately we could only manage 155 in our pursuit however plenty of positive signs to take into the games moving forward.

This week’s 4 Pines Player of the Week goes to Second Grade spinner Elliot Herd after taking his first 5 wicket haul for Manly. Elliot lead 2nd Grade’s attack over the weekend, and at one stage, took 3 wickets in 4 balls to rattle Mosman’s middle order. We are sure this is the first of many big bags this season for Herdy.

A special mention goes out to Brad Wilson who also had great figures of 5/21, however given it is Elliot’s first Michelle we have decided to go with him for this week’s winner. 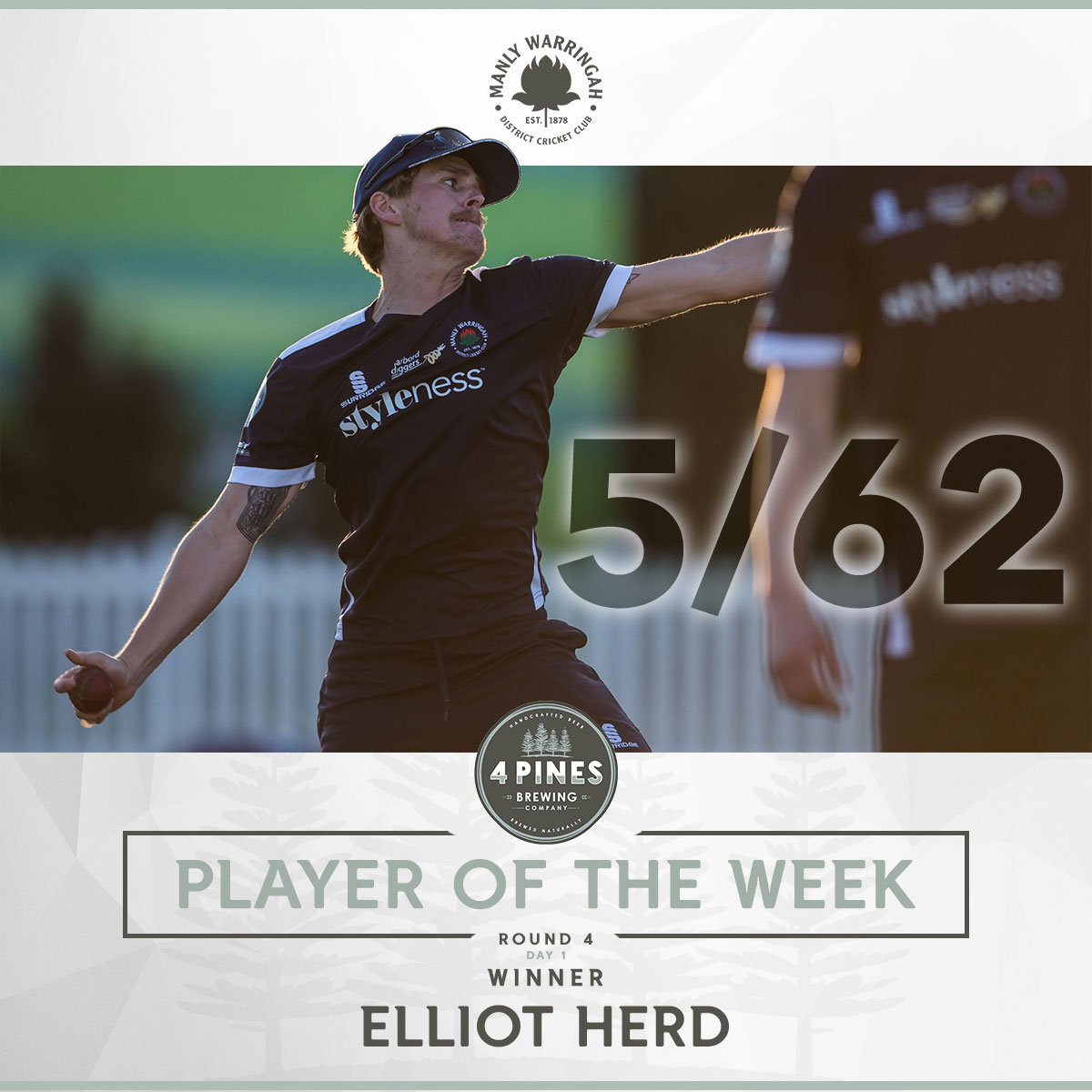 fter a disappointing home loss last round vs Penrith, the boys were eager to get back to 2 day cricket where we had a great victory over Sutherland only a few weeks ago. A cracking morning was made even better as Lenton won the toss and elected to bat on what looked a nice batting wicket.

Farrell (62) and Weston (27) opened proceedings and batted smartly for the first hour or so. Unfortunately we lost our first wicket in Weston just before lunch which brought our skipper to the crease. Fazz and Jay saw out the rest of the morning session with the Tah’s sitting comfortably at 1/78 at lunch.

Unfortunately the middle session was one to forget, with Mosman running through the middle order in a matter of overs to have us well and truly on the back foot. With partners around him dropping rapidly, Farrell held strong and developed a nice partnership with Fozz (28) until a mix-up unfortunately brought about Fazz’s downfall. Fozz continued to battle hard as he also continued to run out of partners. We were eventually bowled out for 159.

The afternoon session was a lot more positive as we toiled hard for the last two hours of the day to have Mosman 4/135 at stumps. All bowlers were exceptional and were backed up well by the fielding unit with great energy and support. Plenty left to do next week but we remain positive that we can claw our way back into this match.

he sun was shining and it was looking like a great day for cricket for once. Mosman won the toss and elected to bat on a flat one at Manly Oval. Mosman got of to a steady start and were 113 for 2 at lunch with Hamish Starr picking up both wickets. First over back from lunch Elliott Herd picked up 3 wickets in 4 balls to put Mosman on the back foot at 133 for 5. Wickets continued to fall and Mosman were not looking great at 181 for 7. However, the tail wagged and a spectator had covered the ball in butter in the interim, which didn’t help the boys with holding there catches. Mosman managed to pull together a respectable 292 for their first innings, with Elliott Herd picking up his maiden 5 wicket bag for the club and Ben Starr picking up 2 wickets early on. Manly were now given the task to bat a tricky 12 overs at the end of the day, Webber and Hole started of well at at no loss after 10 overs. However, Hole was struck on the pads with no shot and told to go home. The game is now poised evenly at 29 for 1, with a long day ahead next week to chase 292.

he mighty 3s rocked up to Rawson Oval on a beautiful day. Nickos lost the toss, again, and the boys were preparing for a day in the field. We started off very well with Nickos and Taylor bowling tight lines and looking ominous for early wickets. They bowled well without luck. Hicks and Wilson were then brought on with immediate impact. Hicks taking the first and brad taking the next 2. All the bowlers bowled very well in the first session with Mosman being 5-80 at tea. After tea it started just how the last session finished, with the boys bowling tight lines and looking very good. Brad was then the destroyer. Brad bowled the house down with batsmen not knowing what was going on. Eventually we took the 10 wickets and Mosman were bowled out for 160. Brad with 5-21 off his 17 overs of quality. He was help by Taylor, Hicks, Jimmy, Jesse. We were in to bat for 11 overs, hoping to see out the day none down. Unfortunately we lost Alec in the 3rd over. Sam and Jacob then batted strongly till stumps to see us 1-20 at the end of the day.

Grade report pending from Will Akhurst

ifth Grade unfortunately had a tough day on Saturday being bowled out for 21. We went out to bowl looking to forget about our poor batting performance and stay positive. Our skipper lead us well taking 3 wickets, whilst Luke Morley also bowled well and collected two. Plenty of work to do this week to try and prevent an outright victory.

he boys rocked up to an afternoon T20 game at Rosedale oval against Fairfield-Liverpool, which was set to be a great contest. The Tah’s lost the toss and were sent in to field, and we started off exceptionally well with Joey Graham hitting areas from ball one to limit the batsmen’s options. Energy was buzzing around and the lads were on. At the other end, Joel Foster was superb, executing plans and allowing us to pick up some early wickets. Ending up with figures of 1-10 and 2-18 respectively. Our middle overs were key with top standard T20 bowling from Alex Bain, ending up with 3-15, assisting very well by Jake Carden. We finished off our last few overs as planned, restricting the opposition to 85. Our batting however, let us down. Joel Foster started strong and got the boys off to a good first 10, with a well put together 28. Middle overs ticking runs between Carden and Vumbaca got the boys closer, but not enough when they fell, along with the rest of the line up- falling just 2 runs short of the target. A disappointing day but the boys will bounce back from this and head into 50 over cricket with desire.

warm sunny day with views of the top of Sydney harbor bridge saw the Manly third grade women’s team take on Gordon in their second match of the season. With a short boundary and only ten players available there was a challenge ahead of the team but a strong bowling attack and with the determination to win the team took to the field.

Gordon had an experienced side and showed that using the short boundary to their advantage, the first wicket fell in the third over with Renee Hough taking a great catch – the first of two by the Hough sisters. Gordon were not to be deterred and continued to score runs at a rate of 6 per over. A change in the bowling brought on our two youngest members Chelsea McLerie and Sienna James to use their pace and spin bowling in a lethal combination.

Sienna’s spin bowling was crucial to the match, taking three wickets in her first over and putting Manly back in a confident position. At the half way point a further flurry of wickets by Mia Waddington and Esme Cooke saw Gordon 117/7. However, Gordon’s batting tail proved strong and even a spectacular diving catch by Olivia Hough couldn’t damped their scoring as they found the gaps in the field to hit the boundaries. With a final score of 258/9 Manly knew the size of the task ahead of them.

Nat Guyot and Oliva Hough opened our batting and tentatively saw off the opening spin bowlers. Gordon had our first wicket in the form of a run out of Olivia Hough which was quickly followed by Mia Waddington being caught. Sienna James took to the mantel and forged a great partnership with Nat, scoring fours and sixes between them but with her 50 nearing Sienna was caught. Nat continued to bat well but her fifty was not to be had in this game either.

Manly continued the fight till the thirty eighth over before the team of ten fell to a respectable 155/9. While the win was not to be had, Manly played the game truly in the spirit of cricket. When a Gordon’s batter who had never played before came onto the field, the team offered words of encouragement on her performance and congratulated her once dismissed.

Manly showed an improved performance and determined spirit throughout the match. I would like to thank our scorer, coaches and all of our supporters. We take up the fight again this weekend ready for a win!