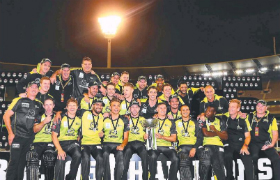 SHAWN Bradstreet was still coming to terms with the amazing feat yesterday.

As assistant coach of the Sydney Thunder, he was confident the Mike Hussey led squad would hold their own in the T20 Big Bash against the likes of the Sydney Sixers and Melbourne Renegades.

But win the whole tournament?

“It was an unbelievable experience, to be part of such a special group is something I will never forget,’’ Bradstreet said when reflecting on Sunday night’s triumph in the final versus the Melbourne Stars.

“To go to the MCG and chase down a decent total (176) with so much on the line was incredible.

“Uzzie (Khawaja) has been seeing the ball different to everyone else all tournament — he is a superstar in his own right.

“We have certainly come a long way as a sporting unit.” Bradstreet isn’t wrong. The past few Big Bash summers have been bleak for Thunder, with one campaign netting zero wins.

Belief changed instantly and Bradstreet, who is Manly’s first grade coach, was an integral part of the process behind the scenes.

“They call him (Hussey) Mr Cricket for a reason. I have never seen someone so articulate in the way he went about his business,’’ Bradstreet said.

“At the same time Huss made sure it was never about him, it was about the team working to their strengths and realising their potential.

“Seeing young blokes like Chris Green (from Northern District) fire with the ball, that pleased me no end.”

“Having a couple of Manly blokes made it that little bit sweeter,’’ he said.

“Celebrating post game at the MCG was amazing and surreal at the same time.”