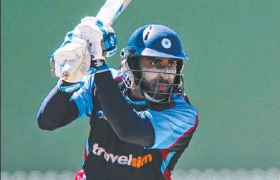 THE boys are calling me Nostradamus after I wrote last week that James Crosthwaite was due for a score.

He knows he needs to convert that start to a half-century and beyond when we resume at Manly Oval this morning – and the signs look very good.

His timing, placement and footwork were all back and he made it all look quite comfortable on a deck that made the batsman work hard and a slow outfield.

I’m looking forward to seeing more of the same and also hopeful Ahillen Beadle spends plenty of time in the middle.

AB bowled beautifully in tandem with Michael Visser last week and now we need him to stand up with the bat.

Beadle is a class act and played a major role in our premiership breakthrough last season.

If AB and Crossy fire in the first session, we will be in a strong position to pick up first innings points and keep that surge up the table going.

IT’S a great sign of our depth at junior level that selectors had an extremely difficult task in naming our preliminary 19-man Green Shield squad for 2015/16.

That 19 will be whittled down to 14 by early next month after a series of training sessions under our coaches.

The Green Shield is the most prestigious under-16 competition in Australian cricket, with all points gained contributing to the club championship tally.

Well done to those who have made it to this stage.

You have given our selectors plenty of welcome headaches.

OUR Poidevin-Gray (under21) campaign began last Sunday and it was a case of the one that got away.

The boys bowled and fielded superbly to restrict the powerful Bankstown batting line-up to just 136.

Unfortunately, the majority of our batsmen didn’t deliver, with only Tom Kaye (26) and keeper James Boyer (21) getting a start as we fell 11 runs short of what would have been a memorable win.

Skipper Ryan Farrell and coach Tim Cruickshank are confident the team will bounce back against Easts tomorrow at Waverley Oval.

Play begins at 10am.