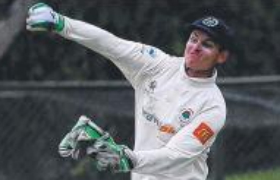 MANLY wicketkeeper-batsman Jay Lenton has been rewarded for his electric form in Sydney grade cricket after his selection in the NSW Sheffield Shield squad yesterday.

The 25-year-old will make his first-class debut for the Blues on Friday against Victoria at the SCG.

Regular gloveman Peter Nevill is unavailable, donning the gloves for Australia versus New Zealand at the Gabba after the retirement of Brad Haddin.

Lenton, who is also the Waratahs club captain, was still pinching himself when reflecting on the news.

“When I got the phone call initially, I was almost speechless,’’ he said.

“I came in to do a morning training session with the boys and was presented my (Blues) cap in front of the playing group.

“It is a massive opportunity, and I will look to repay the faith shown in me from the coaching staff.”

Lenton, who joined Manly last season and went on to win a premiership, will be the 43rd player from the club to represent his state.

He has been a standout for NSW’s second XI in recent years.

Lenton also has a chance to cement his spot in fourday cricket with Nevill tipped to be behind the stumps for the entire Kiwi Test series and also against the West Indies.

“It is a reward for Jay’s hard work behind the scenes,’’ he said.

“In the off-season he left nothing to chance and three centuries later tells the story. His work behind the stumps has also been very tidy.

“Ultimately our job is to develop players. Everyone is over the moon for him.”