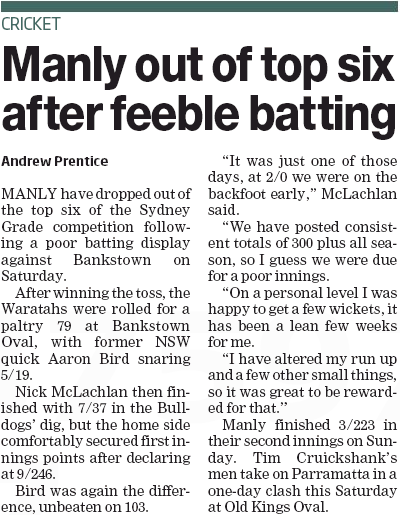 MANLY have dropped out of the top six of the Sydney Grade competition following a poor batting display against Bankstown on Saturday.

After winning the toss, the Waratahs were rolled for a paltry 79 at Bankstown Oval, with former NSW quick Aaron Bird snaring 5/19.

Nick McLachlan then finished with 7/37 in the Bulldogs’ dig, but the home side comfortably secured first innings points after declaring at 9/246.

Bird was again the difference, unbeaten on 103.

“It was just one of those days, at 2/0 we were on the backfoot early,” McLachlan said.

“We have posted consistent totals of 300 plus all season, so I guess we were due for a poor innings.

“On a personal level I was happy to get a few wickets, it has been a lean few weeks for me.

“I have altered my run up and a few other small things, so it was great to be rewarded for that.”

Manly finished 3/223 in their second innings on Sunday. Tim Cruickshank’s men take on Parramatta in a one-day clash this Saturday at Old Kings Oval.