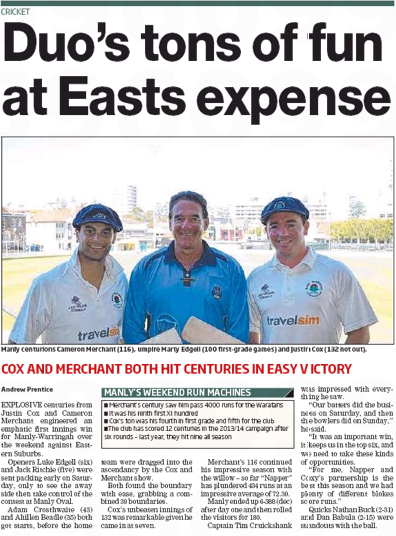 EXPLOSIVE centuries from Justin Cox and Cameron Merchant engineered an emphatic first innings win for Manly-Warringah over the weekend against Eastern Suburbs.

Openers Luke Edgell (six) and Jack Ritchie (five) were sent packing early on Saturday, only to see the away side then take control of the contest at Manly Oval.

Adam Crosthwaite (43) and Ahillen Beadle (35) both got starts, before the home team were dragged into the ascendancy by the Cox and Merchant show.

Both found the boundary with ease, grabbing a combined 39 boundaries.

Cox’s unbeaten innings of 132 was remarkable given he came in at seven.

Merchant’s 116 continued his impressive season with the willow – so far “Napper” has plundered 434 runs at an impressive average of 72.30.

Captain Tim Cruickshank was impressed with everything he saw.

“Our batters did the business on Saturday, and then the bowlers did on Sunday,’’ he said.

“It was an important win, it keeps us in the top six, and we need to take these kinds of opportunities.

“For me, Napper and Coxy’s partnership is the best this season and we had plenty of different blokes score runs.”