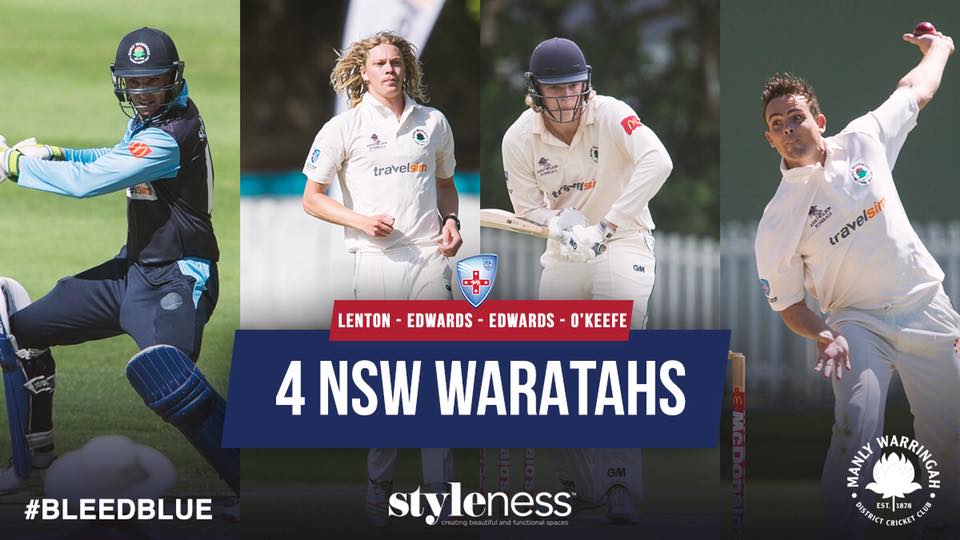 The Styleness Manly Waratahs are pleased to announce the recent selection of four manly players in the NSW team for the JLT Cup.

Played against Western Australia at the WACA, the side featured Manly Players Steve O’Keefe, first grade Captain Jay Lenton, as well as brothers and Manly Juniors Jack and Mickey Edwards.

Despite not getting the victory, the Manly boys did us and their state proud, with each player having some good performances in the match.

After a highly successful pre-season with the Blues, Jack Edwards made a strong debut for his state, making a solid 32 off 39, and helping the Blues steady the ship after a batting collapse.

Jack was joined by older brother Mickey, who bowled well picking up a wicket, and was unlucky to not take more.

What makes the moment more special for Jack and Mickey, is the fact that they are the first brothers since the Waugh brothers in 2004, to play for NSW in the same side. Congratulations to the brothers on what was surely a special moment for the family.

Manly First Grade Captain Jay Lenton also made his One Day domestic debut for the blues after a few appearances in the Shield side in past seasons. Replacing NSW Captain Phil Nevill, Jay had a strong showing with the gloves, taking three catches, including one off Manly spinner, Steve O’ Keefe.

SOK, the veteran amongst the Manly boys in the NSW side, was very tidy with the ball, picking up a wicket and going at under 5 an over, which is a great economy for One Day Cricket.

It is the first time in the club’s history that four players will feature in the state side, and it is a testament to the work that is being done by the Manly Cricket to give its players the best opportunity at higher honours.

In further exciting news, First Grade All-Rounder Chris Green was recently added to the Blues Squad for the JLT Cup, after some terrific performances in the Caribbean Premier League. Congratulations Greeny on your well-deserved selection.

Congratulations and good luck to all Manly Players involved with the Blues side for the remainder of the JLT Cup season!