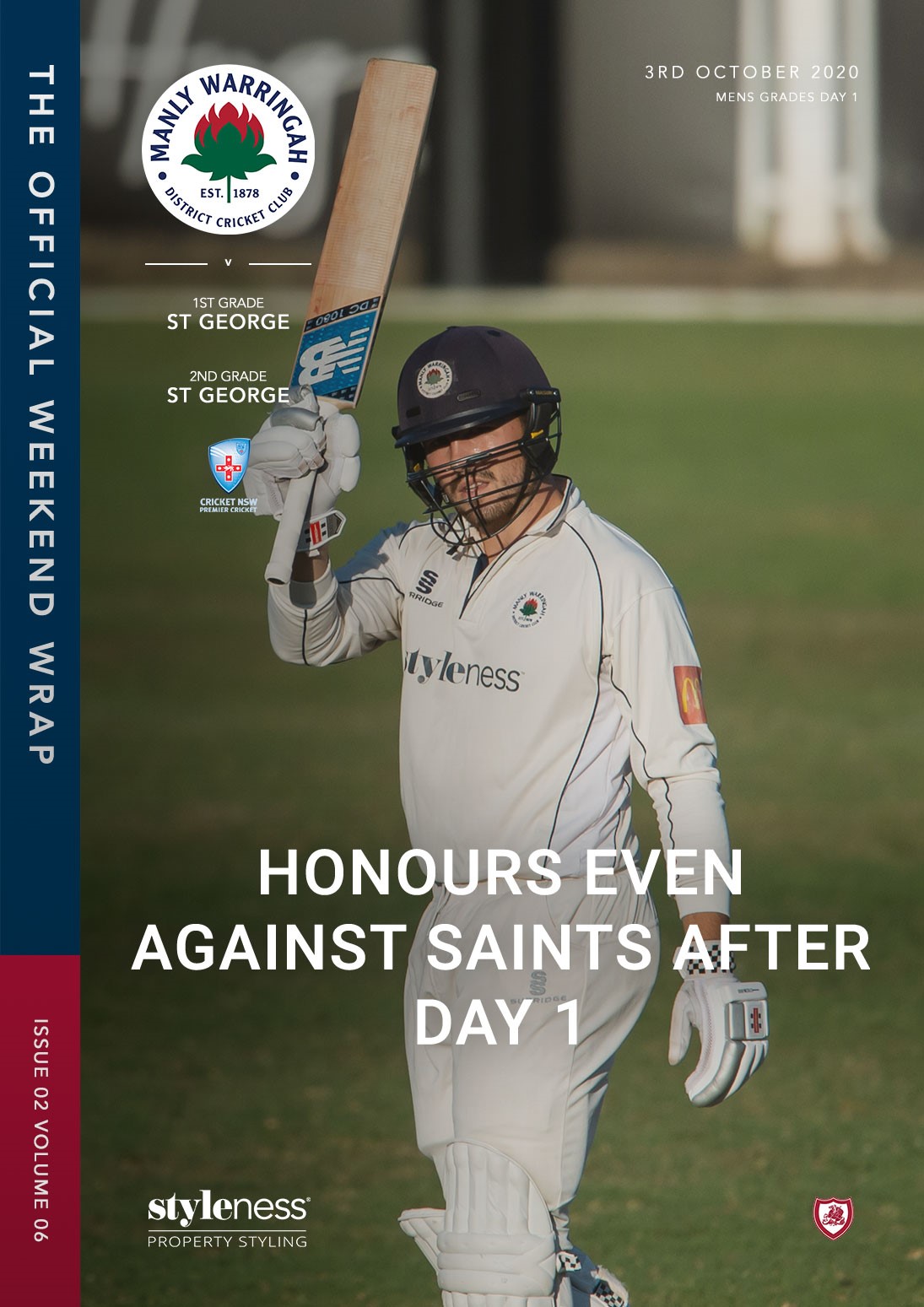 Our second fixture of the 2020/21 season saw the first day of a 2-day match against St George. The day saw plenty of runs on the board for the team batting first, leaving plenty to chase for both clubs next week. In 1s it was our turn to rack up a score. The cricket was tough most of the day thanks to a balanced cricket wicket but Ben Bryant (36) battled hard to set the platform before Ollie Davies (91), Cameron Merchant (89) and Ryan Farrell (50) cashed in as we reached 383 all out. It was a similar story in 2s for St George, who hit 395 thanks to a scintillating 165 from Matt Hopkins, but the boys fought hard all day lead by Josh Wigney (3/56) and Joel Davies 2/86) to take 9 wickets at the close. Manly are 0/28 in reply with Matt Brewster 15* and Logan Weston 8* at the crease.

In the week that he took his first step into fatherhood, he took a big step on the front foot for our Mighty 1’s side to making a large 383 on day one. This week’s Player of the Week is none other than Cameron Merchant. Cam had an outstanding day with the bat after a solid innings the previous week, where he put together a classy and gritty 89. In compiling his innings, Cameron was instrumental in taking first grade to a positive position in the game. The innings epitomised valuing your wicket, allowing the bowlers to gear up for a big week next week. For a long time now, Cam has been an anchor and role model within our club, and after a strong off-season, we are all glad to see him reaping the rewards. So, to this week’s Player of the Week, congrats both on and off the field! 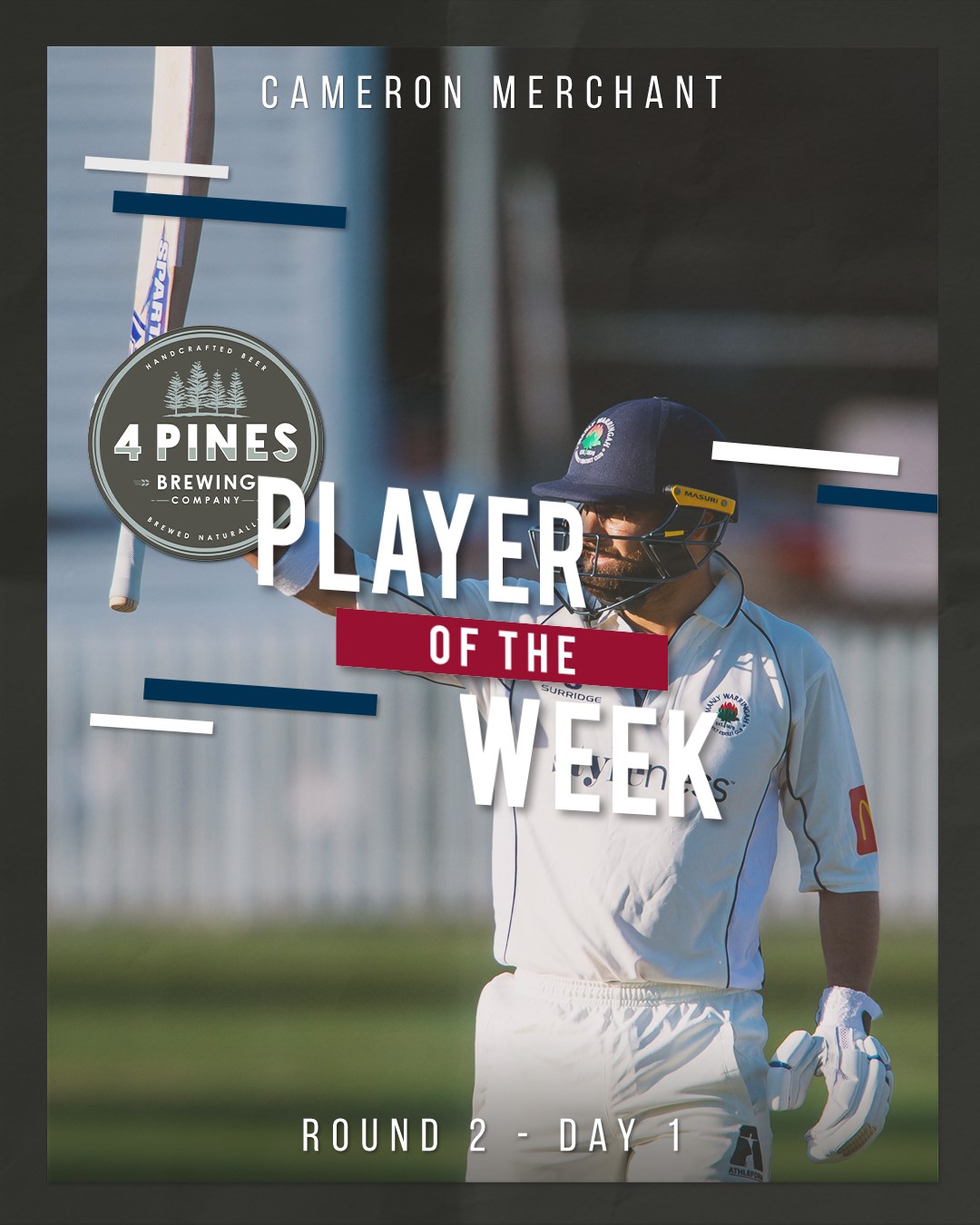 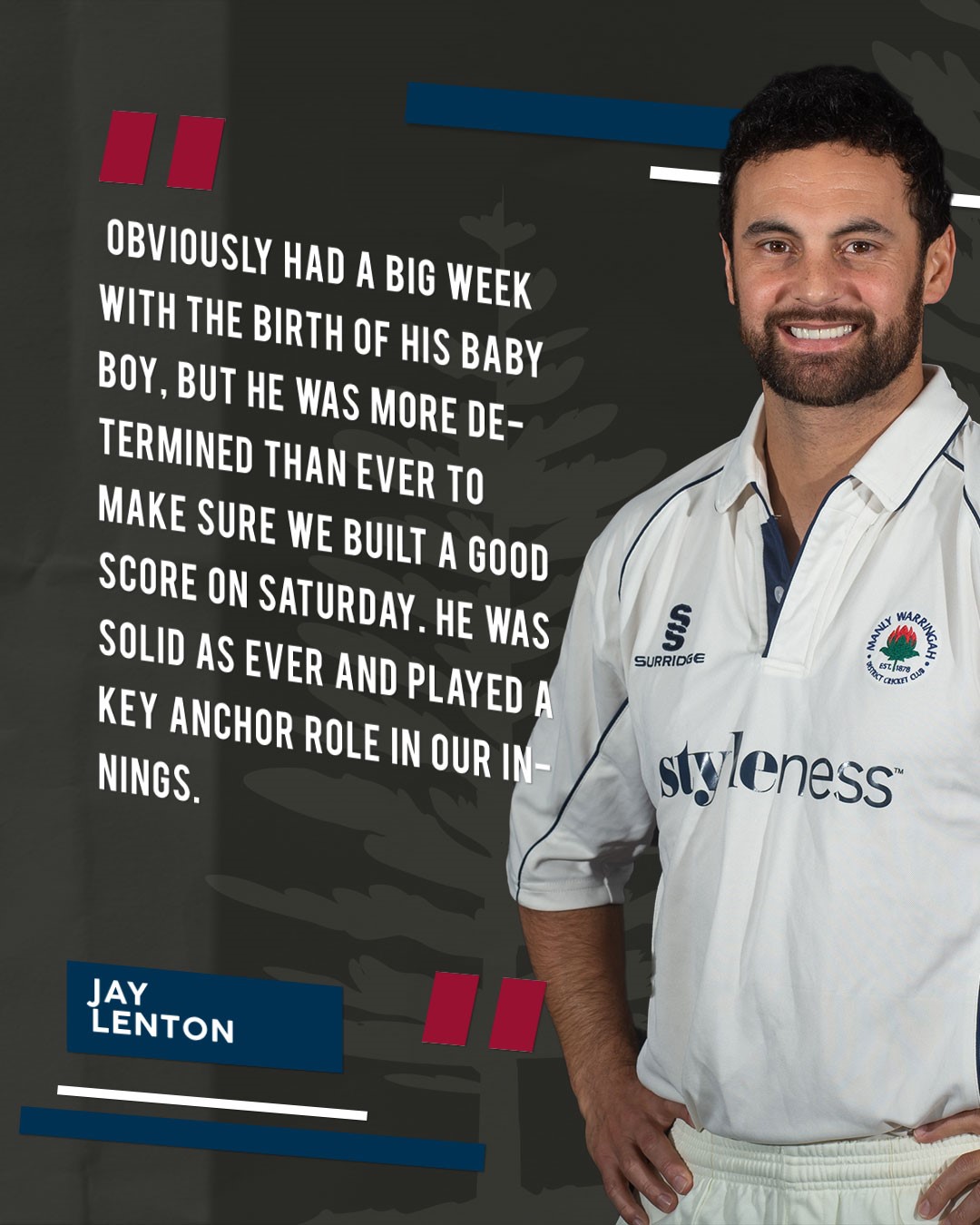 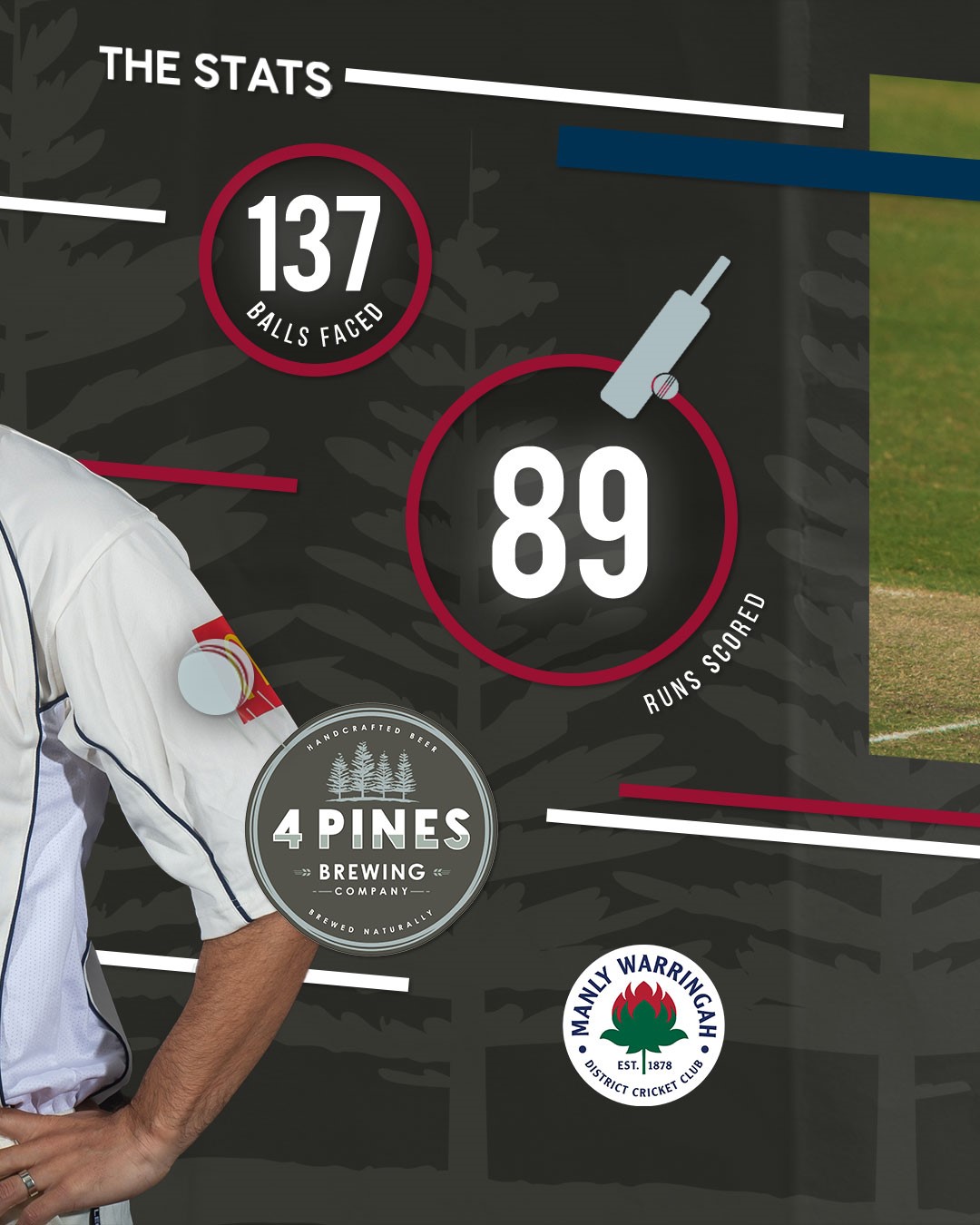 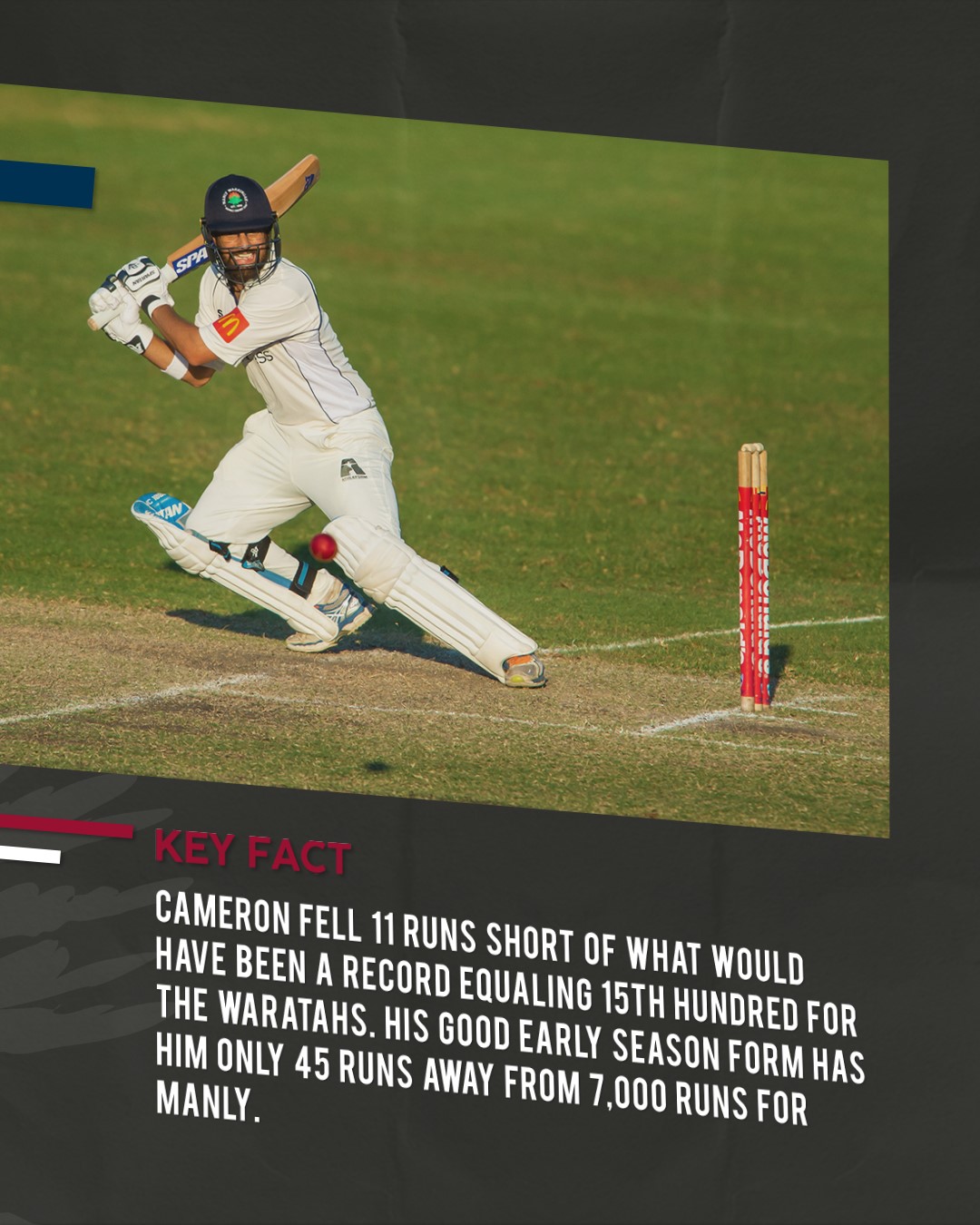 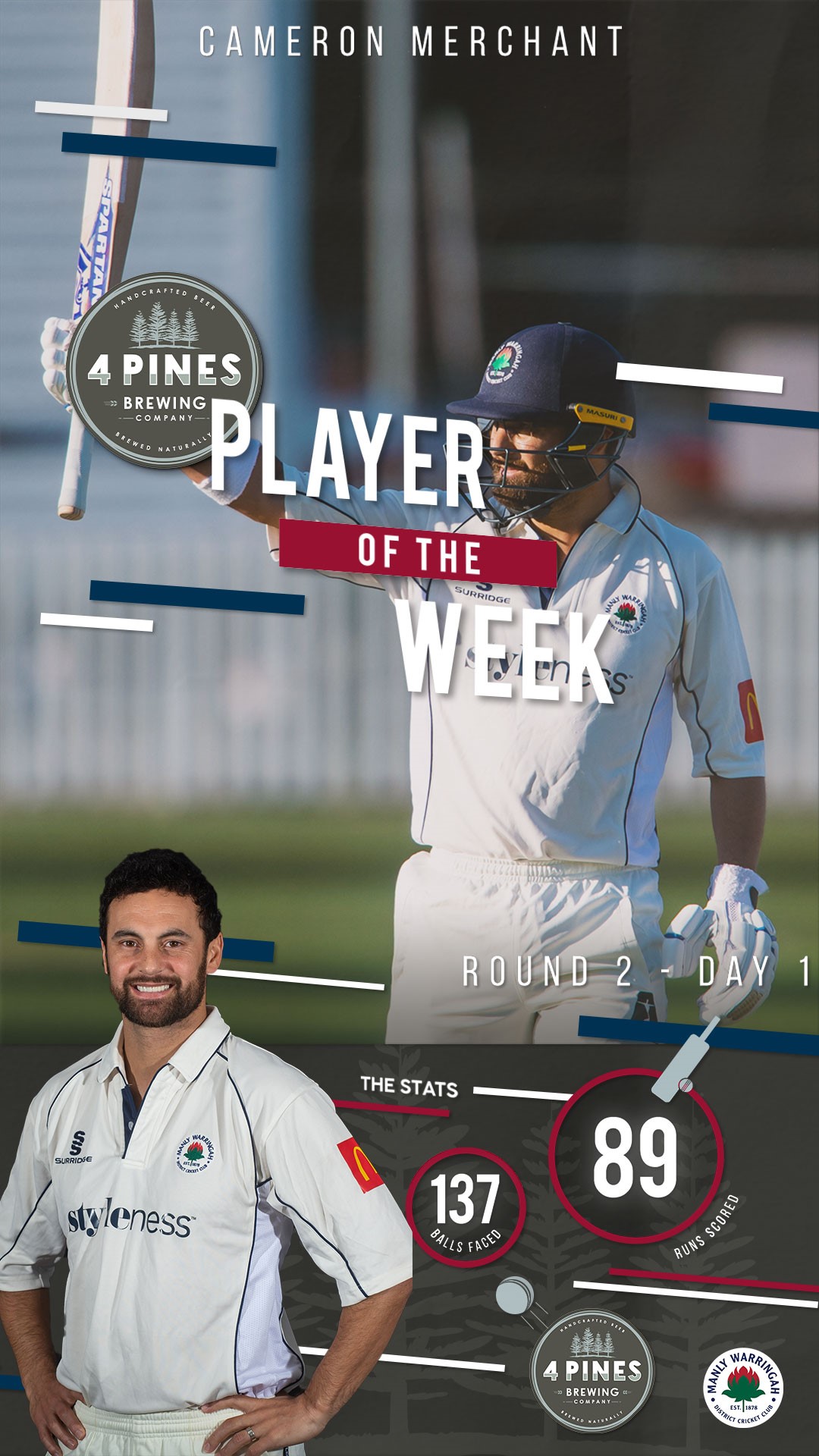 The 1st Grade boys turned up to a picturesque Manly Oval with a lot of confidence after a big win against Mosman a week earlier, Skipper Jay Lenton won the toss and decided to have a stick first up on good looking cricket wicket.

Openers Ben Bryant and “Don’t call me Joel, Call me Fireball Foz” did a brilliant job seeing of the opening bowlers from the St George side which included a rather well known player called Trent Copeland. Unfortunately Foz was dismissed by 1st change bowler Moises Henriques. The boys were in a pretty good position at lunch with the score at 2/70. After the lunch break Ollie Davies continued his unbelievable run of form with a run a ball 91 unfortunately getting bowled as back to back centuries approached, The Skip also provided a great innings at the other end in support of Ollie. Jay copped a peach of a delivery from Copeland and was out for 31 just after tea. This brought Nappa and Faz to the crease with Nappa being very busy and faz powering the ball all over the field, these two out on just over 100 before Faz held out for a very well made 50, The lower order got a bit of a licence at he rear end of the day. Nappa finished on a classy 89 and the team making there way to a respectable 383.

A big day next week with a very strong St George batting lineup. 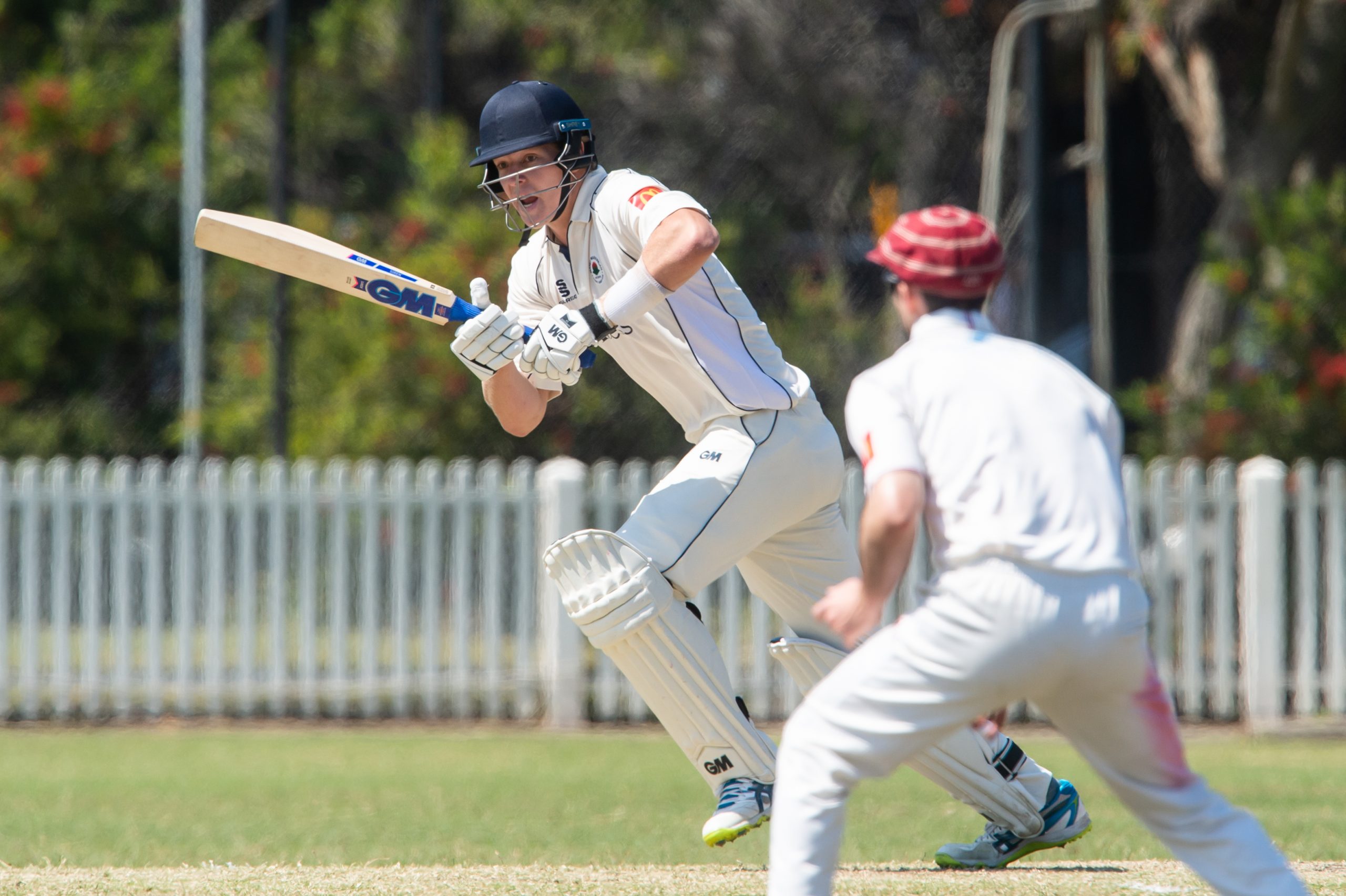 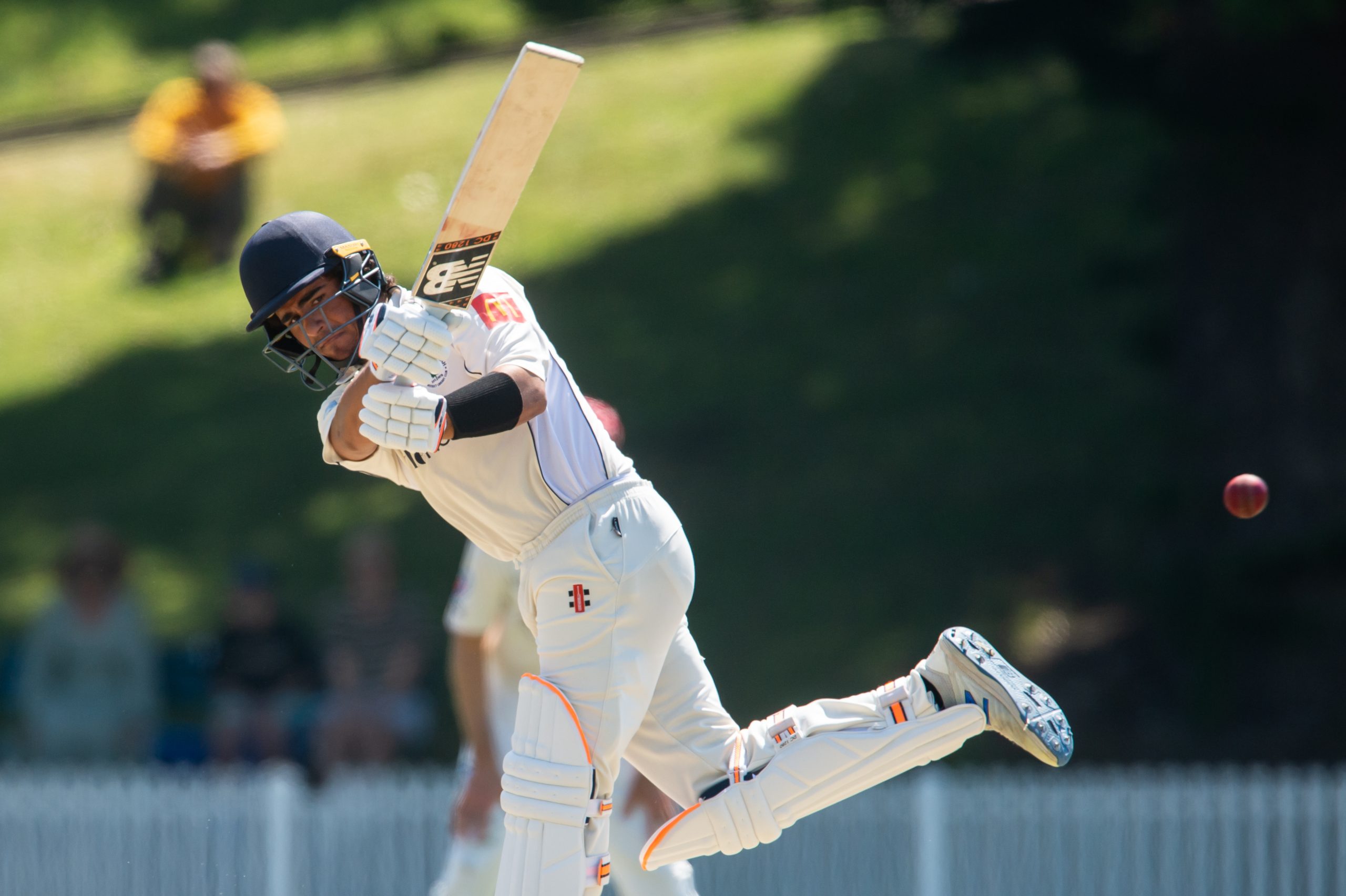 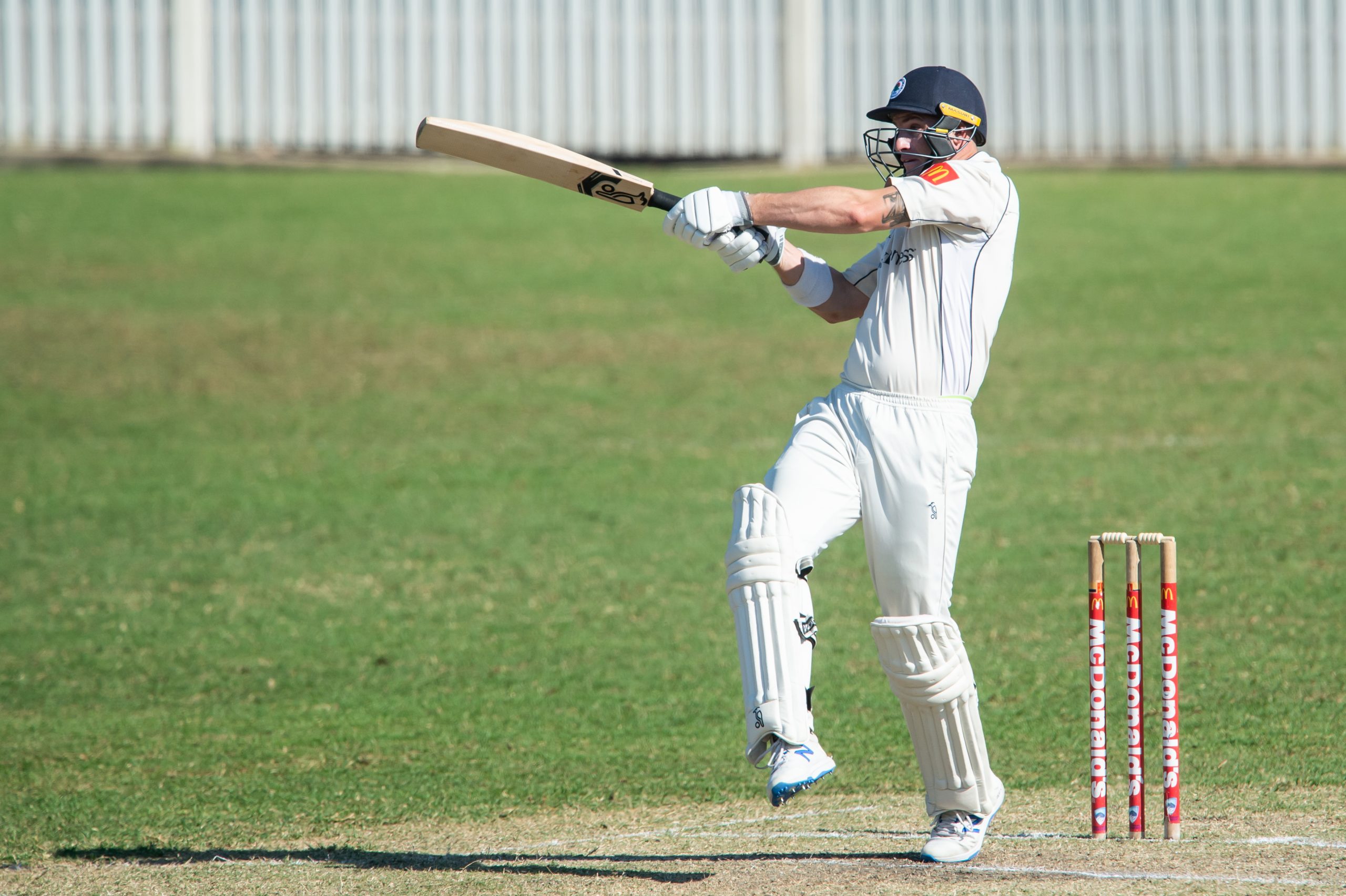 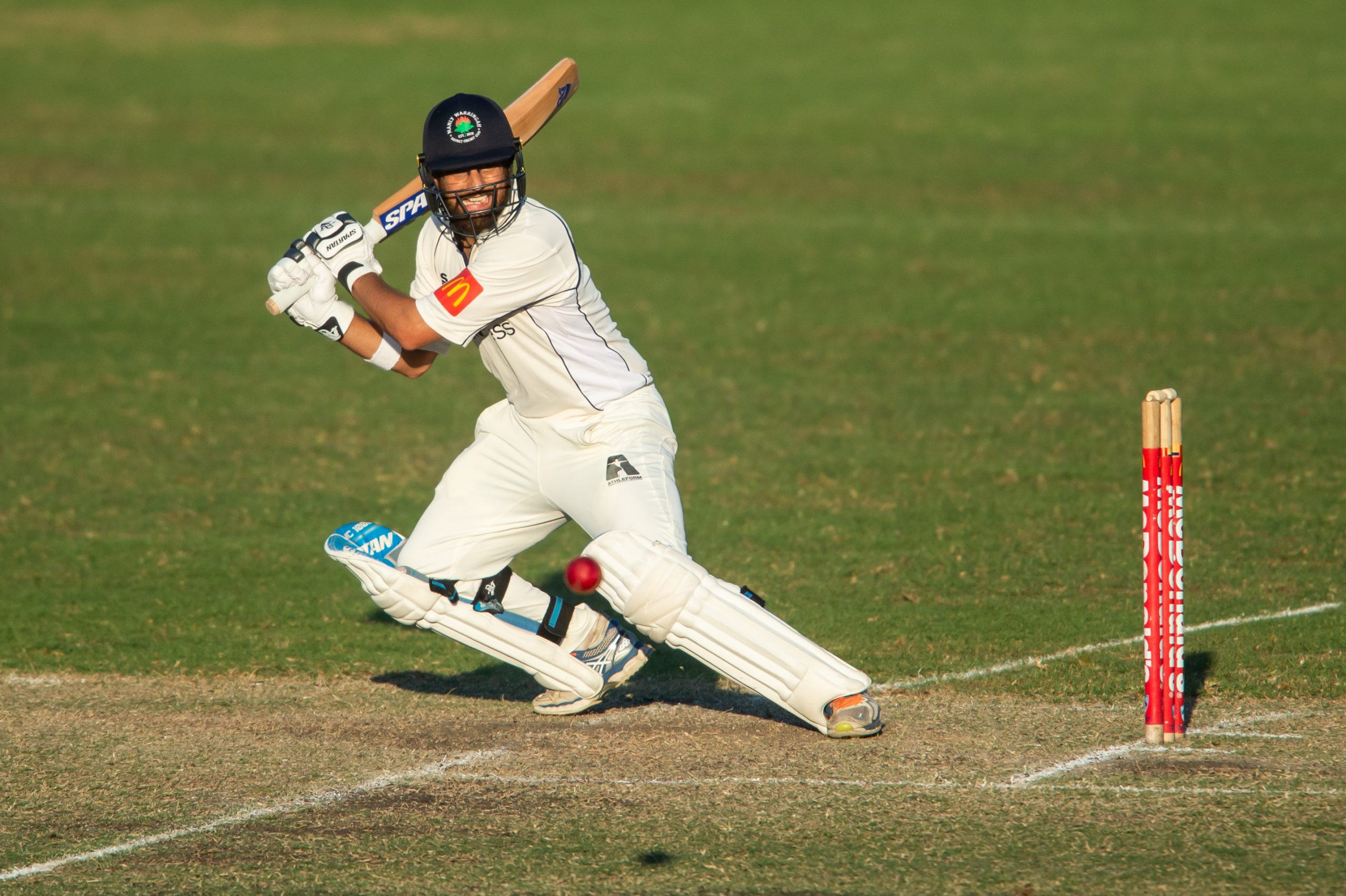 The twos boys rocked up to a pictures Hurstville oval looking to continue the momentum from the previous week against Mosman.

Jamo’s track record last season in regards to winning tosses was horrific so if you think this year he had changed his ways you are absolutely incorrect, sent into bowl on the hardest cricket surface possibly ever

Jamo and Seward opened the bowling with early energy and after a seed from Jamo, our spirits were high but cricket had other plans.

We soon found out that this would be a brutal day in the dirt. Wiggers bowled extremely well and grabbed three wickets throughout the innings, also well supported by Joel Davies, Tom Kay and issi. A well compiled innings by the opposition opener made things tough however, after initially thinking we may be chasing 500+, we did extremely well to pin them back to 395, a menacing total however a very chaseable one on this outfield and short boundaries.

Brewster and Weston batted superbly for the last six overs of the day finishing on 0/28.

A big chase next week for the boys but there is great confidence in our strong batting line up.