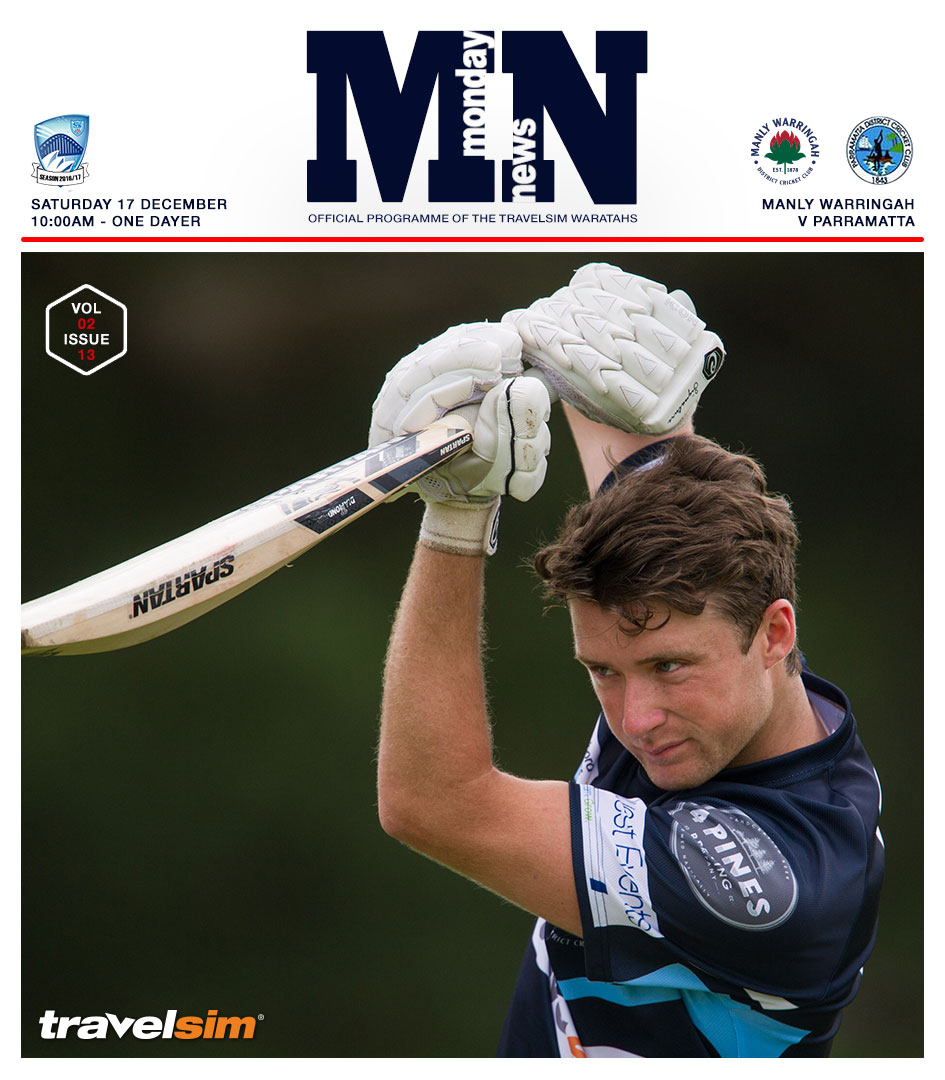 The TravelSim Waratah’s had a weekend of mixed results against Parramatta with home sides winning all matches. First Grade were comprehensively beaten after posting a defendable total of 227. Ryan Farrell (105) starred with his first ton in the top grade with support from Adam Crosthwaite (42) and Cameron Merchant (28). Unfortunately the boys didn’t quite get their bowling right at the start and were ambushed by some aggressive batting from Parramatta. They ended up passing our score 4 down in the 36th over. Second Grade enjoyed their 4th win of the season in a hard fought match at Manly Oval. There were many contributers throughout the day as Andrew Jamieson and Michael Visser both took 3 poles, and Kaye (67), Rawlings (31) and Davies (26*) chipped in well with the bat to ensure a much needed 6 points for Cubbys men. Big shoutout to Oliver Davies who showed maturity beyond his years, in his Second Grade debut steering the boys home in the final overs of the match. Third Grade suffered a close loss in a reduced 40 over match. After bundling Parramatta out for 190, Warren’s men fell 7 runs shy with Luke Edgell (50) and Ned Hole (35) the top runscorers for the day. Fourth Grade enjoyed a come from behind victory as they chased down a tricky total of 152. Maxy Burgess played an important role in ensuring the boys got over the line. 5th Grade were unfortunately called off on friday afternoon.

As we head into the break, only two Grade’s sit inside the top six. A big second half of the season ahead for the Manly boys as we look towards winning some titles.

Current Positions of Manly Sides at the Christmas Break:

This week’s 4 Pines Brewery Player of the Week goes to Ryan Farrell. With Jay and AB both missing from 1st Grade’s lineup over the weekend, Ryan was presented an opportunity from Crossy to open the batting. It’s fair to say Ryan took his chance with both hands, showing how professional he has become as a cricketer over the past few seasons. With limited time at the crease this summer, to deliver a 100 in trying conditions, is a testimate to a man who works as hard on his batting as anyone in the club. This is Ryan’s second ton for the Tah’s and his first of many in the top grade.

We rocked up to Merrylands oval with lots of excitement with our debutant jack Edwards showing his enthusiasm from the start of the weekly touch footy game, with jay out due to thunder commitments James and Faz went out to bat on a slowish parramatta wicket. After loosing James after a good early partnership Adam and Ryan looked to build a strong partnership when we lost Adam for a well made 42 the score 2-127. On went Ryan plundering away and to be the lead of the tahs batting, along with Napper coming off 111 they built another solid partnership in which Ryan Brought up a very classy 100 his first of many 1st grade hundreds. After a couple of quick wickets jack Edwards got his first hit in the top grade and a little cameo along with Logan and Sammy
gainsford took us to 6-227 after our 50

We went out to bowl on a wicket that was getting better for batting as the day went on we came across some big hitting openers that took to us from ball 1. As a tough tahs outfit we kept our heads up and kept putting in, in what was a very tough position. A few notables were Jack for grabbing his first 1s wicket and Mattos who toiled hard and was unlucky not to have a couple more to his name picking up 1-28. After getting hit around early Jake Carden came back to have tidy figures by the days done showing good use of his slower balls along with Taylor who got 1fa.

In what wasn’t the most conducive to spin Joey and Faz tried to get anything out of the wicket and kept giving it a crack with Faz getting a very good wicket off an outstanding catch by dream. A tough day for the tahs with parramatta running down the total in 37 overs but very good signs ahead with the young talent we have blooded. Massive congrats to our newest century maker Ryan Farrell one of many.

Cubby won the toss and happily sent Parra into bat on a deck that was quite tacky.

Although a lot of balls beat the bat, the new ball probably wasn’t used as well as it could have been with the score 1/40 at drinks. Tom Kaye and Jammo bowled very well in a partnership which brought about 2 really well deserved wickets to T Kaye. From this point on all the bowlers stuck to their plans and bowled as a unit which saw us bowl them out for 169.

The batting innings was always going to be tough early with the new ball doing a bit. Billy got what looked to be a pretty good ball and Jordan followed soon after having us 2/10. Tom Kaye (67) then came out and knuckled down with Rawlings (31) for what turned out to be a match winning partnership. The two batted extremely well in very hot conditions. Much to Billy’s delight he got to return to the crease as Tom’s runner due to some bad cramping. Baz came in and showed great intent scoring an important 18 off 14 balls.

A few wickets fell which left the final 30odd runs up to debutant Ollie Davies, for such a young player he handled this incredibly well. He scored a crucial run-a-ball 26* and hit a couple of massive sixes to finish the match off with authority.

A great day for the Manly boys, we take a lot of momentum into the break.

A special mention to Tom Kaye, after a tough week for him and his family he did everyone proud with a Man of the Match performance. He lead from the front all day and showed his class, well done mate.

Delayed start due to soft pitch gave us a 40 over game on a pitch that possibly slightly favoured the bowlers by the start of play but marginal. We won the toss and had a bowl and did our usual by dropping a slips catch early on from RBP (0/33). All bowlers bowled 8 overs each.
They had a hard hitting opener and a scratchy bloke who found the middle once in his 42 (the bloke we dropped). The hard hitter was out after banging an off drive down the ground only for Sam Alexander to take a great low diving catch.

Wides & no balls littered our bowling during their innings. We bowled 16 of them and they bowled 3 only. All bowlers toiled, an amazing number of balls were mishit just out of reach and Parra took advantage of some sloppiness at times in the field and scored a par score of 190. Alexander (2/33), Evans (2/34), Wigney (3/50) and Crombie (2/37) all bowled reasonably well, Wiggers going for a few in his last couple of overs, the batsmen enjoying the pace of the ball coming on.

Will (1) uncharacteristically walked at the opener and snicked into the slips, Gummer (11) looked very comfortable, working it around before a little leading edge brought him undone. Edgell (50) was in complete control, smashing early boundaries and then settling in picking up easy ones as he moved to 50 in absolute comfort. A half tracker from one of their part time spinners brought him undone with a catch to deep mid wicket. Turning point 1.
Webber (12) flicked at one only to spoon it to mid wicket. Crombie (16) and Virdi (25) set about putting us back on track on a this flat pitch against this average bowling but Jimmy planted one down mid on’s throat. 5/112 with about 6 rpo required.

Ned Hole (35) batted very well. Stroking the ball into gaps and looked in control. Ash was also batting very well but a dart and a snick saw him depart. Turning point 2.
Evans (7) tried to support Hole as he kept us well in the game with his strokeplay until Evans poked one into the gully region and Ned was caught short. Turning point 3 and 6 points down the toilet right there.
Alexander (10) had a go but snicked off to their aggressive capt who felt the need to send Sam off, Evans was run out next ball and Wiggers (7no) and RBP (5no) needed 18 off 2 but fell 6 short.
A really disappointing loss. Just let ourselves down via sundries, dropped catches, overthrows and poor shot selection. This will cost us unless we get one unexpectedly back in the remaining games.

4th grade turned up on a hot sunny day and really wanted to take away 6 points before the break against the blue and gold. The deck was still a little wet after the downpour the night before so we had an extra hour wait.

Once the deck was considered dry enough we won the toss and elected to bowl. Falconer and Wilson started off with the new ball and falconer provided some great line and length bowling using the deck and the strong breeze to his advantage taking 2 early wickets, while Wilson and then McKenna toiled away into the breeze McKenna got the 3rd wicket and they were 3/43 at the first drinks break, they started to form a partnership after lunch until falconer going against the breeze got the big hitting number 4 out, after that dismissal, they started to lose there way with some amazing spin bowling from Isaiah and the return of Maxwell David Hussey Burgess.

The spin pair ran through there 20 overs and it was a pleasure to watch. We ended up bowling them out in the final over for 152 a total we were very happy with.

Cohen and Walter got the run chase underway and they both looked the goods early, Walter really looking to capitalise on anything. Walter was the first to go and in went jimmy boyer, jimbo was looking very comfortable then fell to an absolute peach for 21. In came Isaiah and he was aggressive from the start, cohen feel soon after and were 3-60.

Isaiah and Zach looked as if they were starting to build a strong partnership then the off spinner got one to turn and Isaiah was gone for a well made 20. Zach and Max looked to get us over the line with some power hitting by the most loved red headed player at manly, Zach ended up getting out when the runs needed and balls left was very tight.

Dmac went out there to break the shackles but unfortunately it did not pay off so we were 6 down needing 30 off as many balls. Akhurst did a great job hitting the gaps and coming out with great aggression, he fell when the game was still in the balance, enter Jacob the iceman, just unleashing all of the frustration through some venomous cut shots and with him delivering the goods from one end and Maxy steering the ship from the other it was a great win for the boys.

We will look to continue this into the 2nd half of the season.