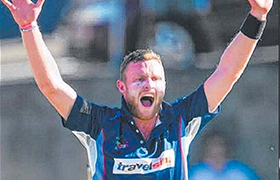 THERE may be a silver lining to our disappointing T20 defeat on Tuesday, with several Manly players being looked at for positions in the Sydney Sixers Academy squad.

Nic Bills, Nick McLachlan, Mickey Edwards, Adam Crosthwaite and Jay Lenton are being eyed and hopefully we’ll have some good news by the end of the weekend.

Those successful will go into a series of trials in the hope of snaring one of the last couple of spots left on the Sixers’ roster for the upcoming Big Bash League.

If any of our boys make it, It will be a good reward for a great T20 season.

The most disappointing aspect was we bowed out in front of a terrific home crowd on what was a great promotion.

The 4pm timeslot was tricky for schoolkids and working families but we were blown away by the level of support we received.

It certainly give us a few ideas for the future and I think you will see a lot more midweek twilight cricket.

THE players rightfully receive the bulk of the accolades and attention at any cricket club.

But as a player, you quickly learn that what happens on one side of the fence can’t happen if things aren’t working smoothly on the other side.

At Manly we have wonderful volunteers who get the job done with a minimum of fuss.

At the top of that list is our first grade manager Michael “Juice” Shepheard.

He is my right-hand man and an irreplaceable part of the Waratahs.

He does every odd job you can think of, from running the drinks out to cleaning up the dressingroom to consoling a batsman who’s just had a first-ball duck.

Juice often travels by public transport from Warriewood to Manly Oval to help out on match day or at training.

Over the years his knowledge of cricket has grown to the extent where he will regularly put his two cents’ worth in, often making great sense and giving me something to think about.

IT WAS great to see our junior rep teams get off to a strong start in the District Cricket Association competition last weekend.

CRICKETERS have always led the way when it comes to facial hair.

Think Merv Hughes, David Boon and Dennis Lillee. Even our club coach Phil “Skid” Marks had a fancy blonde number back in the day.

At Manly the Bics will be put away for the next month as we aim to raise $3000 in support of Movember.