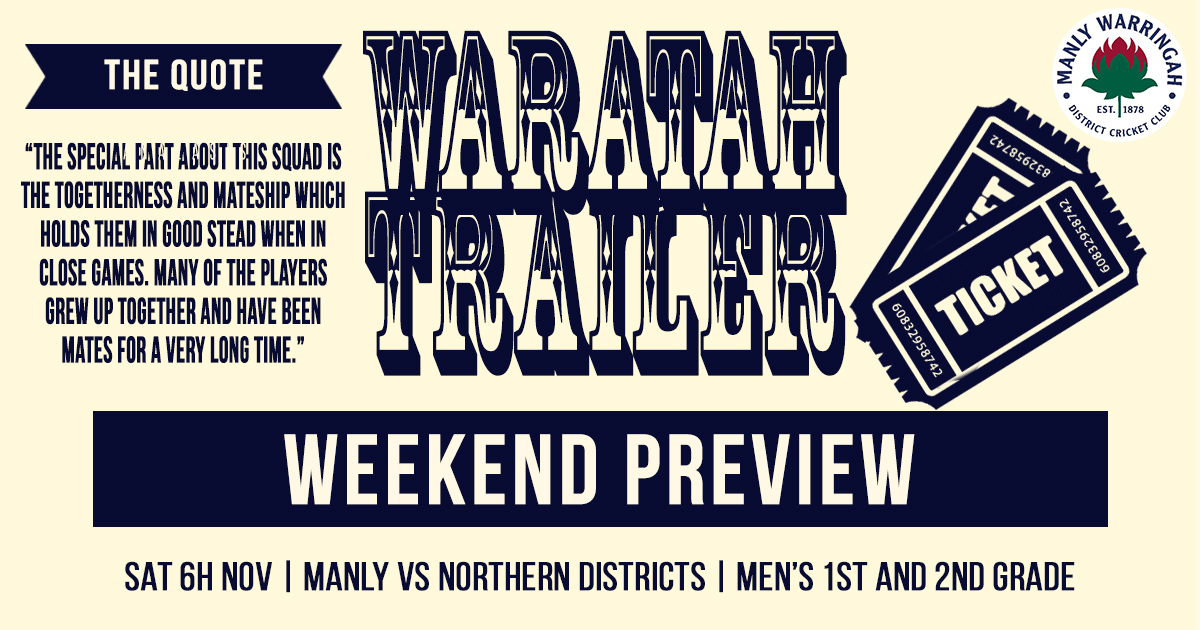 The New South Wales premier cricket season is finally upon us as the Manly-Warringah Waratahs will take on local rivals Northern Districts Cricket Club. 1stand 2nd grade will be the only teams taking the field on Saturday with the lower grades starting their season the following weekend. Interestingly these two clubs met for a trial game on the weekend where Manly scraped over the line by one wicket in first grade at Manly oval and NDs crawled their way to a two-wicket victory at Graham Reserve in second grade. Come round one these results will mean nothing.

Men’s 1st Grade
Manly are full of hope heading into the 2021/22 season after a successful campaign last season. The Tahs made the 2-day grand final and one-day semi-final but unfortunately weren’t able to pick up any silverware. Jay Lenton will once again lead the side and is coming off one of the best seasons of his career, Lenton scored 874 runs last season at an average of 42, this included three centuries in a row against North Sydney, Blacktown and Western Suburbs. He also had 29 dismissals behind the stumps with 23 catches, 2 run outs and 4 stumpings.

Making his way to the club this season is former Mosman quick Greg West, West will provide a point of difference in the Manly attack being a left arm quick. He will also bring great experience to the squad after representing the Adelaide Strikers and Sydney Sixers in the BBL and having 2 first class matches under his belt for New South Wales. Everyone at the club is really excited about having Westy at the club for the coming season.

Ollie Davies is available for selection for round one but is expected to miss a few games throughout the season due to representative honours. Ollie had a breakout season in 2020/21 making his List A debut for New South Wales and his BBL debut for the Sydney Thunder. OD will be looking to make another strong start to his campaign and will try and replicate his round one performance last season where he took down Mosman with 130 off just 86 deliveries.

The Club is blessed to have Stephen O’keefe pulling the navy blue on for another season, SOK was instrumental for the club last season not just on the field but providing great experience and leadership off the field. Ryan Hadley is another one to keep an eye on for the new season after having his best season for the club last season. Ryan took an unbelievable 51 wickets in all formats last season and if he produces similar performances to start the new season a call up for higher honours won’t be far away.

The rest of the Manly line-up will feature many familiar faces with Cameron Merchant returning for another season and Ben Bryant going into his 2nd season for the club. Unfortunately, Joel Foster will not be featuring this season after deciding to explore the world.

Manly’s opponents this coming Saturday, Northern Districts will field an extremely strong side with the likes of Chris Green and Scott Rodgie featuring for the Rangers. Their skipper David Lowery is coming off the back of a terrific season last time out scoring 541 runs at an average of 54 and will be a key wicket for the Tahs in round one.

Play starts at 10am down at the beautiful Manly Oval.

Men’s 2nd Grade
The mighty twos return to the field after claiming the club’s 3rd ever second grade title defeating St. George in last years decider. The side will remain much the same and will be looking for a strong start to their premiership defence. Spiritual leader Andrew Jamieson returns after suffering an achilles injury mid-way through last season. Jamo also made his club 1st grade debut last campaign,and everyone is wishing him well for his comeback to the field.

The special part about this squad is the togetherness and mateship which holds them in good stead when in close games. Many of the players grew up together and have been mates for a very long time.

Sam Gainsford and Isiah Vumbaca both scored their maiden first grade tons last season and will be looking to go to another level this season. The impressive thing about both centuries were both players came in when the opposition were well on top. Gainsford scored his against Wests coming in when the score was 5/33 and Vumbaca scoring his against Campbelltown with the score sitting at 5/110.

The bowling group have been working closely with former South African quick Morne Morkel and are rearing to go in round one. Josh Seward produced a match winning knock with the bat in the Grand Final but will be one to watch with the ball in the new season.

The Tahs take on Northern Districts who are always strong in second grade and were actually knocked out by our boys in last seasons Semi Final. They finished 3rd in the regular season and will no doubt be in the mix for the coming season.

Play starts at 10am at Asquith Oval.