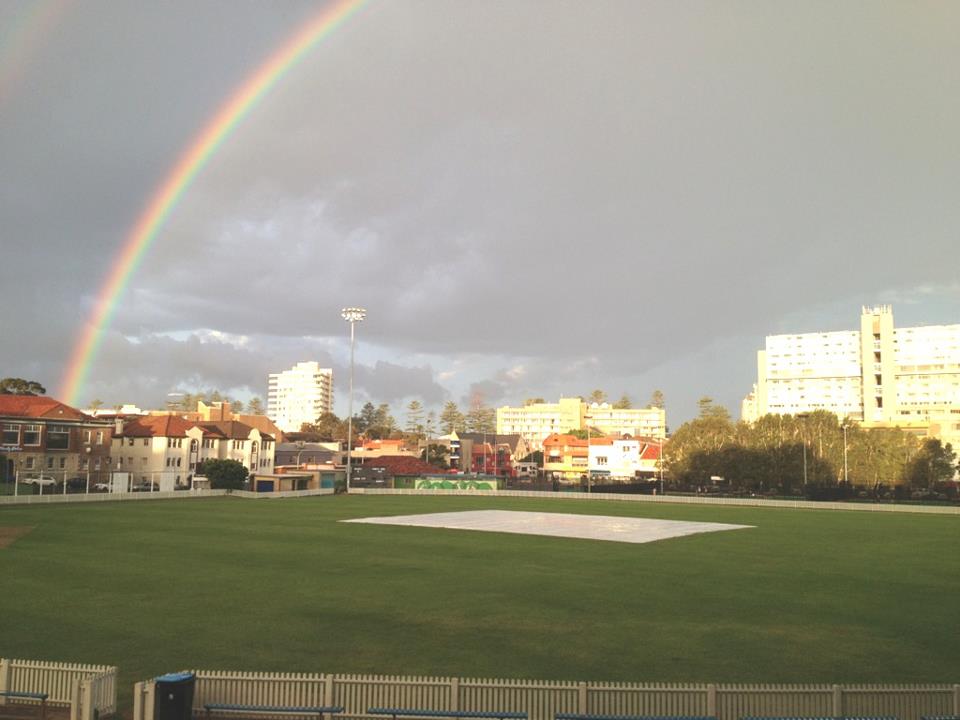 We arrived at Nolans for round 3 hoping to get enough time on the field to play. The outfield was in surprising good condition after the overnight rain, however, the rain refused to clear and the hope of a 10am start faded. Eventually the rain stopped for 5 minutes enabling the captains to get a toss in & Jack called correctly once again and we sent the opposition in to bat. Matt Moran bowled a solid maiden to start proceedings and Shahill made the breakthrough with his 4th ball taking out middle stump with a beautiful in swinger. No sooner had the no. 3 batter arrived & play was stopped as the rain fell heavier. It was a love/hate relationship with the weather & the players were on & off regularly. The umpire’s patience was tested as we all sat in the pavilion hoping the weather would clear enough for a start. Fortunately, the Miss World Pageant was on television and this proved a good distraction for the boys (& Dads). The game became increasingly shorter as time went by & the likelihood of a result was becoming increasingly slimmer. Then around 1pm the weather had cleared, the Dads swept the water off the pitch during the commercial breaks & the match was reduced to 25 overs each & play eventually started. With an eye on the weather above we set about taking as many wickets as possible, the opposition set about scoring runs. It made for an entertaining game and our fielding was tested. We managed to bowl our 25 overs within about 80 minutes. Highlights included 2 good run outs to Matt Moran & Hayden Brown respectively and a brilliant outfield catch by Ned Hole. Overall the general ground fielding was excellent.
Chasing 73 runs from 25 overs Jonah was moved up the order & opened with Jack. They put on 39 runs in 10 overs before Jack top edged the ball & a good catch was taken at square leg. Jacob then walked out in a positive frame of mind & placed the ball well for regular singles and then hit the odd boundary. The boys scored the final 30 runs for victory with Jonah batting very well up the order steering us home with 27 runs.
We consider this win a real bonus because for most of the day we thought the rain would have prevented any possibility of a result.
Paul O’Sullivan & Roy Vumbaca

After a couple of close solid wins, the boys were up against the competitions heavyweights, last year’s DCA finalist, Parramatta. Mother Nature was
keeping us guessing on the trip over, raining in some suburbs, others not. Arrive at the ground, boundaries are out and game appears on. We do our warm ups in the light rain…………Bailey Kenzie calls correctly at the toss and we are bowling first. As parents are huddling under the shelter from the rain, the umpires (are they crazy) lead the boys out to play in the winter like weather. Bill Williams bowls well in his first spell, without success. Spinners, Ben Watts & Ned Barnet are introduced with immediate success in halting the run rate. They bowl beautifully together, to restrict the batsman’s scoring ability and build pressure. Meanwhile, the umpires have advised that game is now 48 overs each due to a short rain delay. After 25
overs, Parramatta are 0/50 and seemingly coasting along. At 57 runs, chaos reins in Parramatta’s camp, as our tight bowling and fielding finally pays off with three quick wickets. First wicket courtesy of Ned, from a pickup and underhand diving throw, to affect a run out at bowlers end-truly sensational!! Next wicket, it was the Bailey and Finn Nixon-Tomko show. Finn (wk) capturing a neat, caught behind off Bailey’s deadly spin. Third wicket was to Bailey, deceiving a batsman, who shouldered arms and lost his stumps-magical stuff!! Bailey finished with 2/20 off his 9 overs. After the 30 over mark, Parramatta was 3/60 and the screws were on!! Fast bowler Jack Hobson, was introduced and bowled well off his 5 overs for 15 runs. The fielding was commendable in the wet and slippery conditions. Parramatta, was slowly increasing their run rate as Lucas Heffernan kept the pressure on with 10 runs off his three overs of spin. Ned finished off his allowable overs, with economical figures of 0/17 of his 9 overs. Tragedy struck Jarod Colyer in the last over, who had bravely chased and dived to stop a boundary, and in the process reinjuring his sprained ankle from schoolyard mishap during the week-carried from the field. In the dash for cash over the last 8 overs Parramatta moved their score to finish on 3/143.Jake Osborne, Ewan Hughes, Joel McGregor were throwing themselves at the ball in the last few overs. Ben Watt once again bowled sensationally to have figures of 0/14 off his 9 overs. Wickets had been hard to find, but the boys had bowled and fielded tightly to restrict scoring to just under three runs an over.
With the rain back at lunch break, our batsman would have to keep an eye on the run rate as well keep their wickets intact……….testing times ahead!! Losing our opening bat, Jarod with a sprained ankle was a blow, but Joel McGregor was promoted to open with Lucas Heffernan. With rain falling again, Joel & Lucas went out to bat with a clear purpose, run rate and keep their wickets intact. Both boys showed tremendous determination and willingness to take on the fielders with some well-judged running. Joel was showing some dazzling cover drives and ability to find the gaps. On 47 runs, Joel lost his wicket via lbw-so close to a well-deserved half century. Joel & Lucas had set the team up for victory, with a superb opening partnership of 91 runs off 20 overs-just as important, with chance of a rain affected match, the run rate was approx. 4 runs an over. In came Bailey (13 no), to provide great support for Lucas, who played an upbeat innings, smashing any loose ball, to finish on 67 no. Lucas played some lovely on-drives and cuts in achieving his maiden half century for Manly .The game was won in the 34th over by Manly, losing only one wicket to finish on 1/143- Inspiring win from the boys in wet slippery conditions.
A big thank you to the scorers (Niels & Scott), who were rugged up from the cold conditions, like they were at the North Pole!!
Paul Heffernan & Craig Nixon-Tomko
U12 DCA Coaches