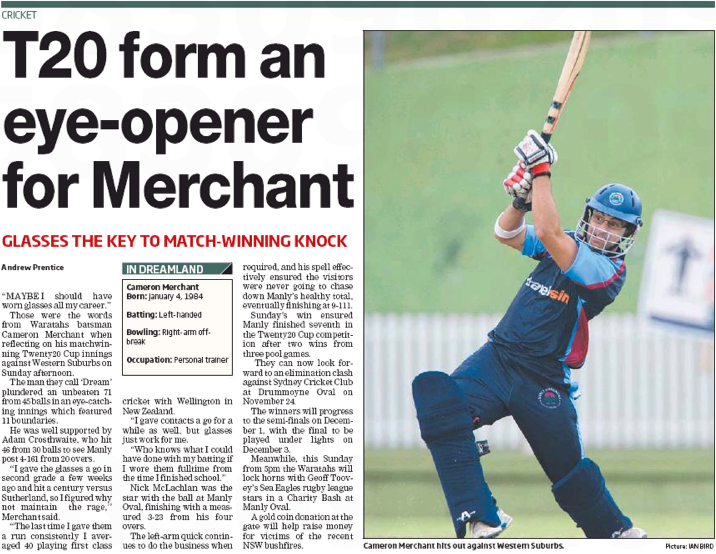 “MAYBE I should have worn glasses all my career.”

Those were the words from Waratahs batsman Cameron Merchant when reflecting on his matchwinning Twenty20 Cup innings against Western Suburbs on Sunday afternoon.

The man they call ‘Dream’ plundered an unbeaten 71 from 45 balls in an eye-catching innings which featured 11 boundaries.

“I gave the glasses a go in second grade a few weeks ago and hit a century versus Sutherland, so I figured why not maintain the rage,’’ Merchant said.

“The last time I gave them a run consistently I averaged 40 playing first class cricket with Wellington in New Zealand.

“I gave contacts a go for a while as well, but glasses just work for me.

“Who knows what I could have done with my batting if I wore them fulltime from the time I finished school.”

Nick McLachlan was the star with the ball at Manly Oval, finishing with a measured 3-23 from his four overs.

The left-arm quick continues to do the business when required, and his spell effectively ensured the visitors were never going to chase down Manly’s healthy total, eventually finishing at 9-111.

They can now look forward to an elimination clash against Sydney Cricket Club at Drummoyne Oval on November 24.

The winners will progress to the semi-finals on December 1, with the final to be played under lights on December 3.

Meanwhile, this Sunday from 5pm the Waratahs will lock horns with Geoff Toovey’s Sea Eagles rugby league stars in a Charity Bash at Manly Oval.

A gold coin donation at the gate will help raise money for victims of the recent NSW bushfires.