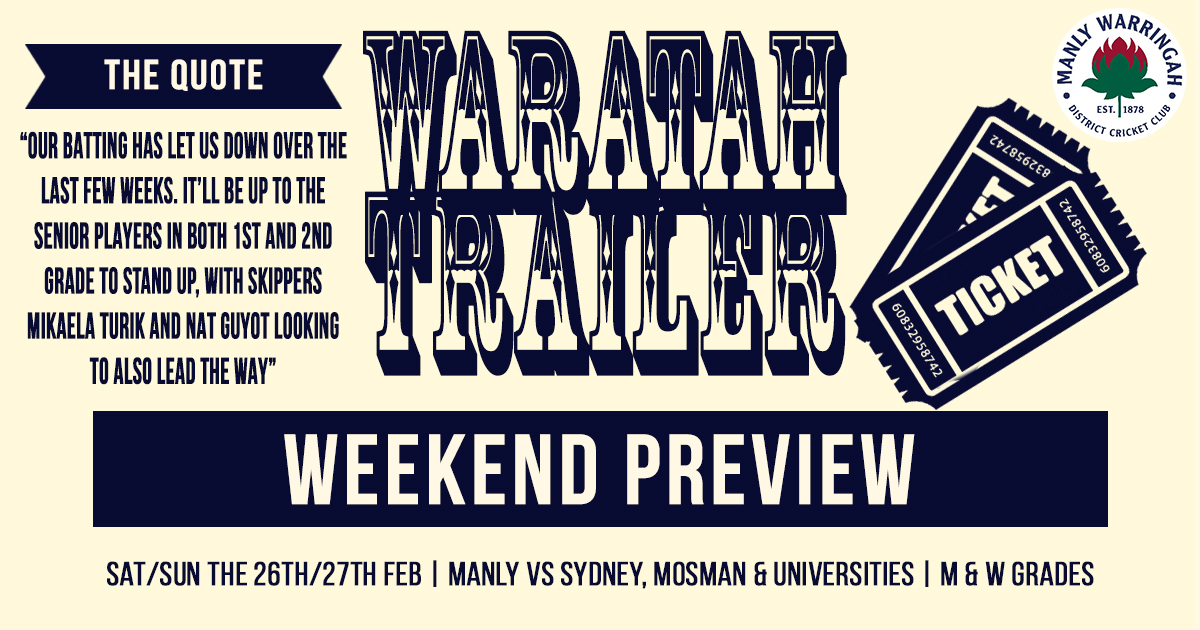 We are coming towards the pointy end of the regular season and with the majority of sides still in the hunt for the finals it should set up an exciting end of the season.

We start with Women’s first grade this week, our batting has let us down the last few weeks and it’ll be up to the senior players in both 1st and 2nd grade to stand up, with skippers Mikaela Turik and Nat Guyot looking to also lead the way. It’ll be a tough fixture against the current ladder leaders, Sydney. It’s a must win. Manly currently sit 6 points behind St.George-Sutherland and with only 3 rounds left to play they can’t afford to slip further away. The Tahs will have home ground advantage this weekend at Manly Oval.

The 2nd grade side have also had a tough couple of rounds and it doesn’t get any easier when they welcome the top of the table Sydney to Frank Gray Oval this Sunday. The bowling group has been solid but like the 1st grade side it’s been the batting that has let them down over the last few weeks. A win will keep them in the hunt for a finals spot.

Renee Hough’s 3rd Grade side have the bye this weekend as they currently sit inside the top 4, 11 points ahead of the 5th placed Parramatta.

Jay Lenton and his first-grade team have created a 10-point gap between them and St. George in 5th and now only sit 6 points behind the third placed Randwick. Joel Davies is enjoying an excellent debut season in the top grade and will be a key part when Manly take on the high-flying Mosman this weekend at Allan Border Oval. Joel has scored 455 runs this season at an average of 38 which is extremely impressive in the white ball formats. Their opponents Mosman have a had a terrific season thus far and currently sit in 2nd place, this is shaping up to be a cracking fixture.

Just like in first grade, Mosman 2nd grade are having a fine season and sit at the top of the table. The Tahs will be out to make a statement at Manly Oval with a chance to jump into 2nd on the cards. Opener Ned Hole has found some form with the bat with and 80 and 40 in consecutive weeks and provides great stability at the top of the order.

Sam Hole’s 3rd grade have an opportunity to jump into the top when they face the 9th placed Mosman who sit on equal points with the Tahs. Alex Bain has been one of the most consistent bowlers in the club this season as he continues to take vital wickets, Bainy has taken 27 wickets at 14 so far and leads the 3rd grade attack week in week out. The opening partnership of Sam Hole and Lachlan Coyte have been in some solid form as they look to continue getting the side off to good starts.

4th grade have chance to almost cement their position in the finals with a victory against the Whales this weekend. Adam Parkinson was phenomenal last round against Penrith, taking an astonishing 4/0. Parko will be a massive part of the squad heading into finals cricket. Skipper Rochford also continues to deliver with the ball and has a brilliant average of just 11 so far this season. oHHHHHHH

Finally Reiley Dunlop’s 5th grade have found their Mojo again as they look to climb the ladder into the top 3 when they meet with the 18th placed Mosman. Skipper Dunlop has been a mainstay in the batting line-up all season and was at his best last weekend with a match winning 67 opening the batting in tough conditions. The young 5th grade attack of Josh Lawson, James Waddington and Ollie Melville is something to keep an eye on for the remainder of the season with all bowlers finding some good form and with some extra wheels as well.