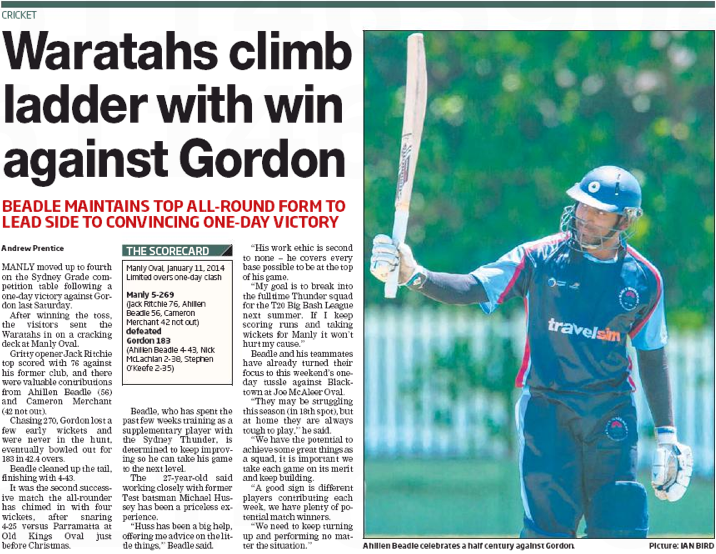 MANLY moved up to fourth on the Sydney Grade competition table following a one-day victory against Gordon last Saturday.

After winning the toss, the visitors sent the Waratahs in on a cracking deck at Manly Oval.

Gritty opener Jack Ritchie top scored with 76 against his former club, and there were valuable contributions from Ahillen Beadle (56) and Cameron Merchant (42 not out).

Chasing 270, Gordon lost a few early wickets and were never in the hunt, eventually bowled out for 183 in 42.4 overs.

Beadle cleaned up the tail, finishing with 4-43.

It was the second successive match the all-rounder has chimed in with four wickets, after snaring 4-25 versus Parramatta at Old Kings Oval just before Christmas.

Beadle, who has spent the past few weeks training as a supplementary player with the Sydney Thunder, is determined to keep improving so he can take his game to the next level.

The 27-year-old said working closely with former Test batsman Michael Hussey has been a priceless experience.

“Huss has been a big help, offering me advice on the little things,’’ Beadle said.

“His work ethic is second to none – he covers every base possible to be at the top of his game.

“My goal is to break into the fulltime Thunder squad for the T20 Big Bash League next summer. If I keep scoring runs and taking wickets for Manly it won’t hurt my cause.”

Beadle and his teammates have already turned their focus to this weekend’s oneday tussle against Blacktown at Joe McAleer Oval.

“They may be struggling this season (in 18th spot), but at home they are always tough to play,’’ he said.

“We have the potential to achieve some great things as a squad, it is important we take each game on its merit and keep building.

“A good sign is different players contributing each week, we have plenty of potential match winners.

“We need to keep turning up and performing no matter the situation.’’