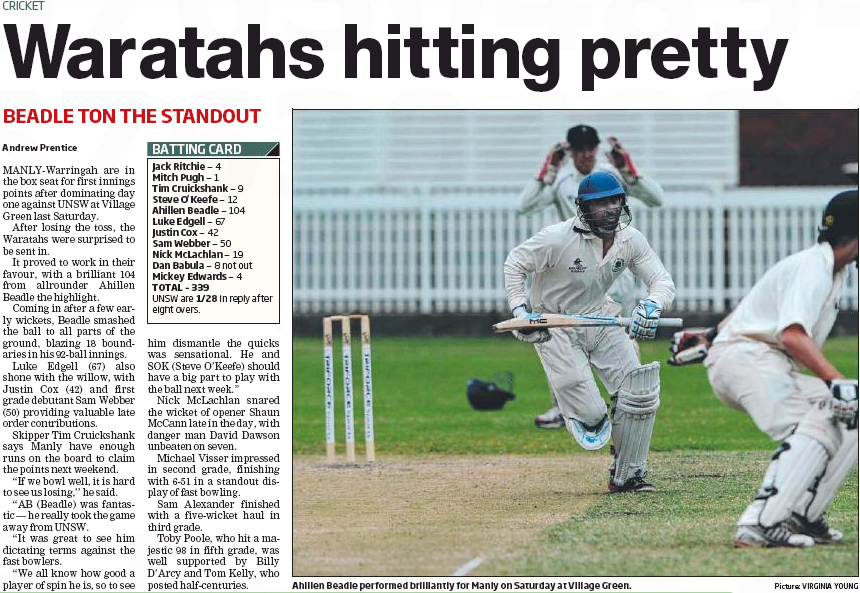 MANLY-Warringah are in the box seat for first innings points after dominating day one against UNSW at Village Green last Saturday.

After losing the toss, the Waratahs were surprised to be sent in.

It proved to work in their favour, with a brilliant 104 from allrounder Ahillen Beadle the highlight.

Coming in after a few early wickets, Beadle smashed the ball to all parts of the ground, blazing 18 boundaries in his 92-ball innings.

Skipper Tim Cruickshank says Manly have enough runs on the board to claim the points next weekend.

“AB (Beadle) was fantastic — he really took the game away from UNSW.

“It was great to see him dictating terms against the fast bowlers.

“We all know how good a player of spin he is, so to see him dismantle the quicks was sensational. He and SOK (Steve O’Keefe) should have a big part to play with the ball next week.”

Michael Visser impressed in second grade, finishing with 6-51 in a standout display of fast bowling.

Sam Alexander finished with a five-wicket haul in third grade.

Toby Poole, who hit a majestic 98 in fifth grade, was well supported by Billy D’Arcy and Tom Kelly, who posted half-centuries.