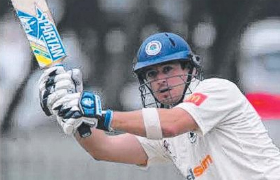 A BLISTERING century from James Crosthwaite and an eventual bonus point win still wasn’t enough to see the Waratahs finish in the top six after the final game of their campaign.

Crosthwaite then hammered the Saints’ attack, belting 108 from 63 balls before he was run out.

He found the boundary with ease at Hurstville Oval, plundering 13 fours and five sixes.

Manly captain Jay Lenton described it as one of the more destructive knocks he has ever seen. “James was outstanding – he knew we needed a big result to be any chance of playing finals cricket,’’ he said.

“He was perfectly placed for the situation and definitely made the most of it.

“Jack Ritchie (62 from 48 balls) was also great. He played his (anchor) role to perfection,” Lenton said.

Rather than ponder what may have been, Lenton pointed to the number of local juniors in Manly’s first XI last Saturday.

“Apart from myself, James (Crosthwaite) and Matty White, all the other lads have come through our development program,’’ he said. “We lost a few tight games that we should have won, but that’s cricket.

“Our focus now is seeing our second and third grade go deep in their respective finals campaigns.”