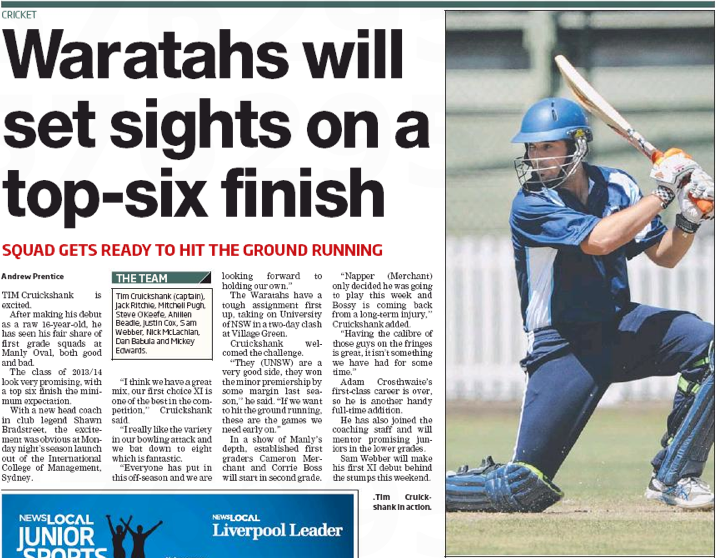 After making his debut as a raw 16-year-old, he has seen his fair share of first grade squads at Manly Oval, both good and bad.

The class of 2013/14 look very promising, with a top six finish the minimum expectation.

With a new head coach in club legend Shawn Bradstreet, the excitement was obvious at Monday night’s season launch out of the International College of Management, Sydney.

“I think we have a great mix, our first choice XI is one of the best in the competition,’’ Cruickshank said.

“I really like the variety in our bowling attack and we bat down to eight which is fantastic.

“Everyone has put in this off-season and we are looking forward to holding our own.”

The Waratahs have a tough assignment first up, taking on University of NSWin a two-day clash at Village Green.

“They (UNSW) are a very good side, they won the minor premiership by some margin last season,’’ he said. “If we want to hit the ground running, these are the games we need early on.”

In a show of Manly’s depth, established first graders Cameron Merchant and Corrie Boss will start in second grade.

“Napper (Merchant) only decided he was going to play this week and Bossy is coming back from a long-term injury,’’ Cruickshank added.

“Having the calibre of those guys on the fringes is great, it isn’t something we have had for some time.”

Adam Crosthwaite’s first-class career is over, so he is another handy full-time addition.

He has also joined the coaching staff and will mentor promising juniors in the lower grades.

Sam Webber will make his first XI debut behind the stumps this weekend.