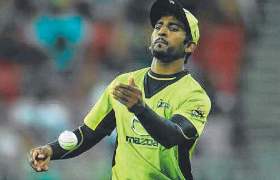 MANLY cricket president Andrew Fraser has seen plenty of talented players in his time, so when he says Ahillen Beadle “could be anything” it carries a fair bit of sway.

The Waratahs all-rounder has signed a new deal with the Sydney Thunder ahead of the T20 Big Bash League next month.

It will see the former Australian under-19 representative teammates with the likes of South African great Jacques Kallis and retired Australian Test batsman Mike Hussey.

“AB is an incredibly talented cricketer, he really is a matchwinner,’’ Fraser said.

“Every since he came to Manly a few summers ago he has been fantastic with the bat and ball.

“All the younger guys look up to him. He doesn’t say much but actions speak louder than words.

“Now is his time to step up, it is a big opportunity he needs to take.”

Adam Crosthwaite has seen enough over the past few years to be confident Beadle won’t be out of his depth.

The wicketkeeper-batsman, who has previously turned out in the T20 Big Bash League for the Adelaide Strikers, said his Waratahs teammate could shock a few rival teams.

“I have always felt he was underrated. Everyone at Manly knows what he can do,’’ Crosthwaite said.

“He has been exceptional for us and offers plenty to any team.

“I am looking forward to seeing how he goes. Who knows, if he impresses first class honours could await.”

It has been a big week for the Manly club.

Jay Lenton makes his debut for NSW today in the Sheffield Shield match against Victoria at the SCG.

He will be joined by Wakehurst Redbacks junior Jackson Bird, after he defected from the Melbourne Stars.

The T20 Big Bash League begins on December 17 with the derby at Homebush’s Sydney Showground.