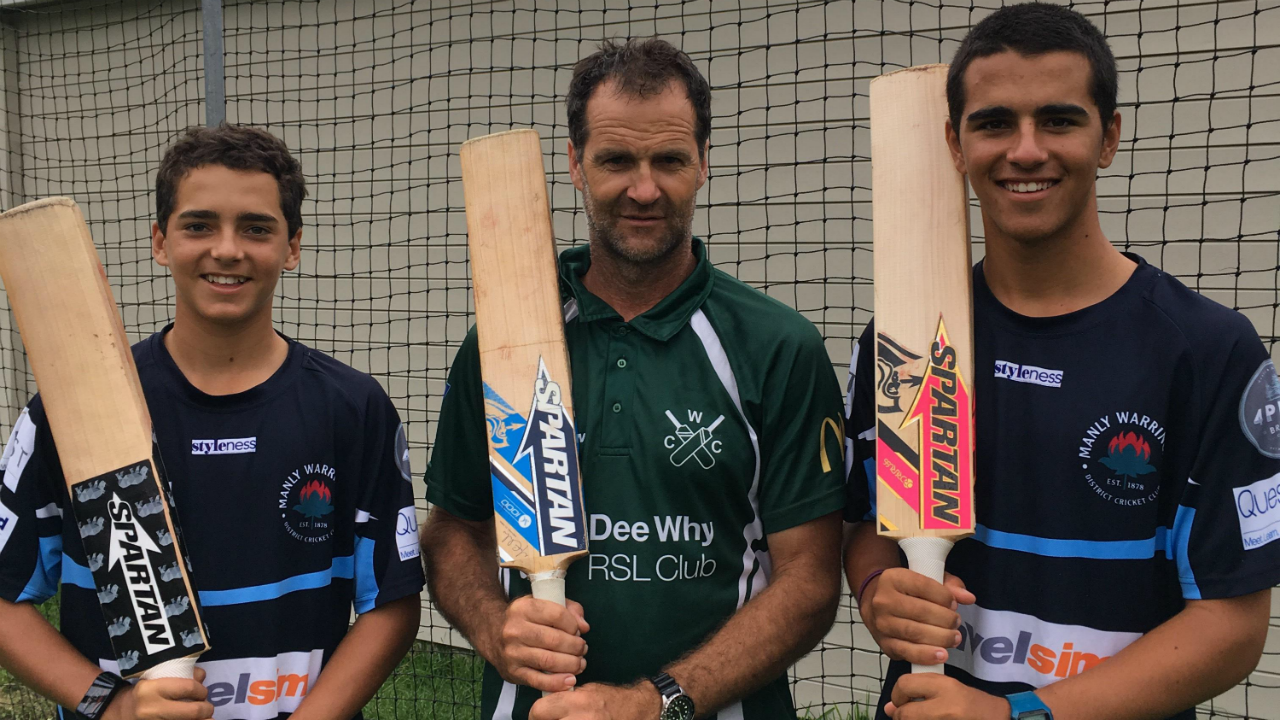 The Davies family on Sydney’s northern beaches has created a new cricket record that is unlikely ever to be topped.

In the same round, in two different grades, brothers Ollie (right of photo above) and Joel Davies (left) scored centuries for Manly against St George in the Sydney club competition.

Not to be outdone, their father Kevin was busy compiling a ton of his own for Warringah’s fourth grade Shires club – a feeder to the Manly club.

A frantic search of the NSW grade and shires cricket records show no evidence of father-son centuries in the same round in more than 120 years of competition.

Fourteen-year-old Joel was the first of the Davies clan to reach triple figures, making 101 not out for Manly’s fifth grade side.

Just a few kilometres down the road, Ollie was racing towards his maiden top first century before lightning and rain combined to temporarily halt his innings on 99.

Back on Sydney’s north shore, 50-year-old Kevin was taking his overnight score from 47 to an undefeated 107 for Warringah’s fourth grade Shires team against Lane Cove.

Right-hand top or middle order batsman Ollie has already represented Australia at under-17 level and is recognised as one of the country’s best young batsmen, while left-hander Joel is also making a name for himself after scoring heavily at junior level.

Kevin hasn’t yet given up on playing for Australia despite being born in 1967, but says he will concentrate on Shires for now.

The family has a cricket net and bowling machine in the backyard of their home, and Kevin’s wife Simone, daughter Lucy and mother-in-law Ann are devoted cricket watchers.

“Obviously it’s a pretty amazing occurrence to have three of us score centuries in the same game,” Kev said.

“It’s always good to see the boys scoring runs but it’s also good to show that there’s still life in us old hacks.”

Ollie said: “It’s a pretty special thing for all three of us to post big scores in the same round. I was especially proud for my younger brother posting his first grade hundred and also Dad, who hadn’t been among the runs lately.”

Joel added: “It was a great day for the three of us. I’m very happy for Dad on scoring his first shires 100 and Ollie for his first first grade ton.”

Visit the story on the sporting news website by going to http://www.sportingnews.com/au/cricket/news/cricket-grade-record-century-davies-family-manly-club/19flu4e9sixgz1983nkkvcdman