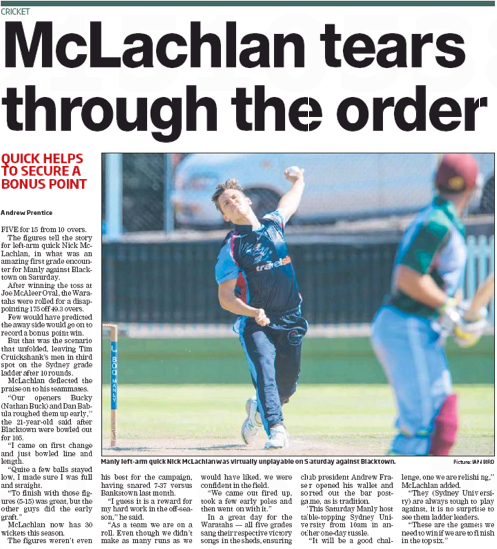 The figures tell the story for left-arm quick Nick McLachlan, in what was an amazing first grade encounter for Manly against Blacktown on Saturday.

After winning the toss at Joe McAleer Oval, the Waratahs were rolled for a disappointing 175 off 49.3 overs.

Few would have predicted the away side would go on to record a bonus point win.

But that was the scenario that unfolded, leaving Tim Cruickshank’s men in third spot on the Sydney grade ladder after 10 rounds.

McLachlan deflected the praise on to his teammates.

“Our openers Bucky (Nathan Buck) and Dan Babula roughed them up early,’’ the 21-year-old said after Blacktown were bowled out for 105.

“I came on first change and just bowled line and length.

“Quite a few balls stayed low, I made sure I was full and straight.

“To finish with those figures (5-15) was great, but the other guys did the early graft.”

McLachlan now has 30 wickets this season.

The figures weren’t even his best for the campaign, having snared 7-37 versus Bankstown last month.

“I guess it is a reward for my hard work in the off-season,’’ he said.

“As a team we are on a roll. Even though we didn’t make as many runs as we would have liked, we were confident in the field.

“We came out fired up, took a few early poles and then went on with it.”

In a great day for the Waratahs — all five grades sang their respective victory songs in the sheds, ensuring club president Andrew Fraser opened his wallet and sorted out the bar postgame, as is tradition.

This Saturday Manly host table-topping Sydney University from 10am in another one-day tussle.

“It will be a good challenge, one we are relishing,’’ McLachlan added.

“They (Sydney University) are always tough to play against, it is no surprise to see them ladder leaders.

“These are the games we need to win if we are to finish in the top six.”