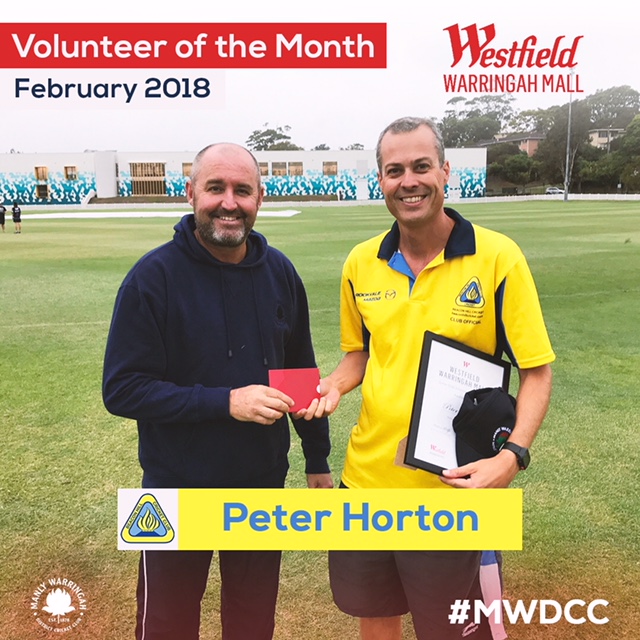 We are pleased to confirm that Peter Horton from Beacon Hill Cricket Club is the winner of the Westfield Warringah Mal,l Junior Club Volunteer of the month for February 2018.

Yes we are a little late in posting this but that doesn’t diminish Peter’s contribution to the Beacon Hill Junior club in anyway.

In-fact it wasn’t all that long ago that Beacon Hill were really struggling for numbers. Although he is not quite a one man band, he has been the driving force behind Beacon Hill’s resurgence on the Northern Beaches.

Peter not only displays his dedication to Beacon Hill being the best that it can be every day, he also runs the Manly Warringah T20 Blast of a Saturday morning.

He has worked tirelessly to grow Beacon Hill which has traditionally been a very small club to more than double the number of teams over the past 5 seasons including growing teams in grass roots T20 Blast and U9 competitions.

In particular, through Peter’s efforts, Beacon Hill was one of the first MWJCA clubs to field girls teams in the U13 Sixers league

Peter is one of the most dedicated volunteers on the Peninsula and offers an enormous amount of his own personal time to Junior Cricket.

He has also been the Beacon Hill delegate on the MWJCA for the last 5 season since 2013/14.

As a result, Peter has been awarded the Westfield Warringah Mall Junior Club Volunteer of the Month for February 2018.

Club vice-President David Gainsford presented Peter with a framed certificate, a $250 gift voucher from Westfield Warringah Mall and a club shirt and hat.

We are so pleased to have Westfield Warringah Mall on-board for this important award for 2017-18. It is vital that we support our local juniors and reward those that go above and beyond. This is something that Westfield recognised as soon as we began talking about this award.

Their community engagement is really coming along in leaps and bounds and we would like to thank an organisation that is such a big part of the Manly Warringah area for supporting local cricket like they are.