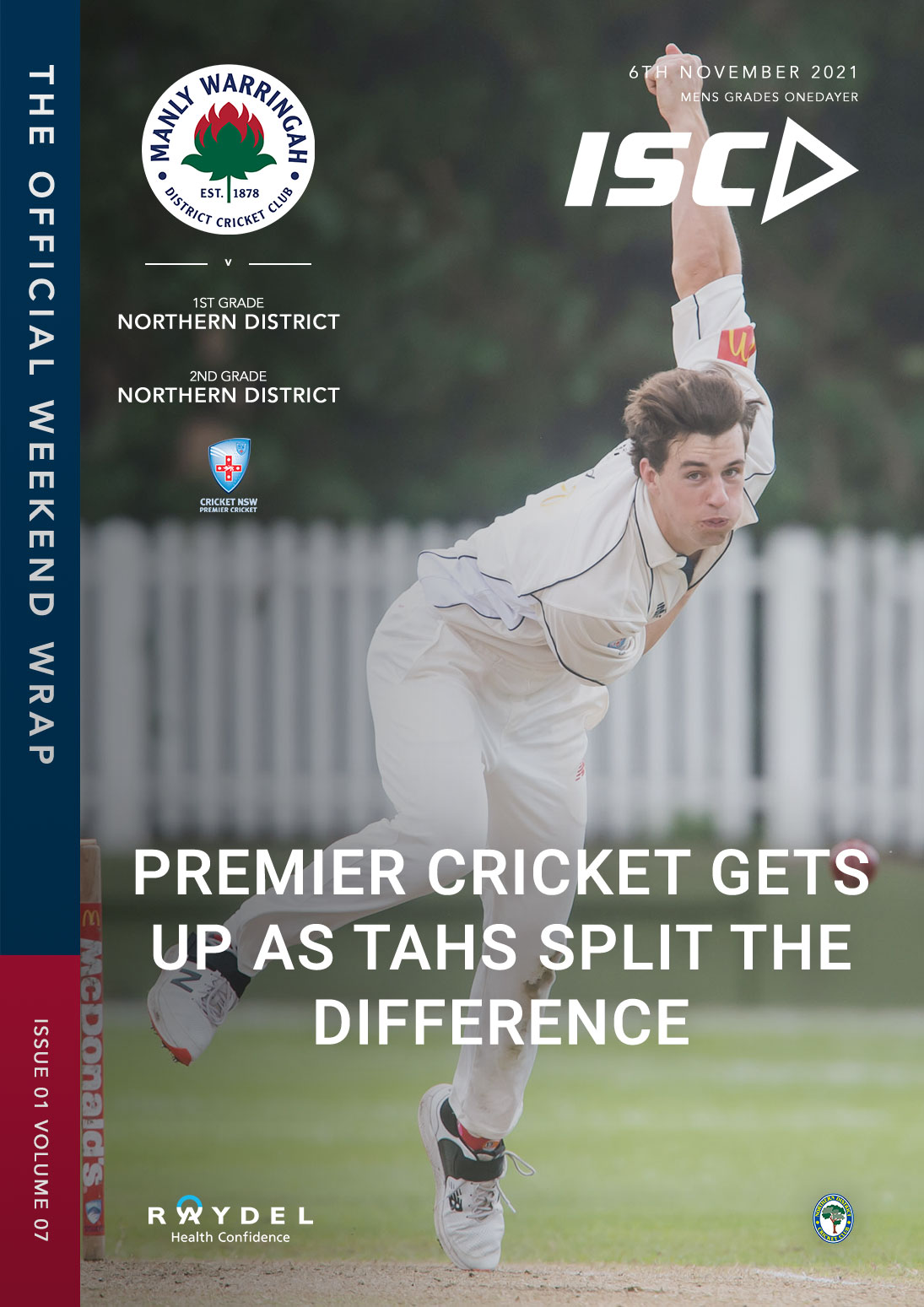 Round 1 of the new season has come and gone for our Men, splitting the 2 games with last years Men’s Club Champions Northern Districts.

It’s been a trying last few months for everyone in Sydney, so it felt like everyone was happy just to be out doors and playing. But we are a competitive club, so winning was always near the front of our minds.

Unfortunately we were completely outplayed by ND’s in first grade, but it’s a blip no one is too worried about and the team will come back bigger and better next week.

2nd grade however had a great win, although did make it harder than it should have been after having ND’s 5 for 27.

So all in all a good start against a strong club. Always competitive and hard fought matches, but done in the right way. Week 1 is done.

Jacob O’Sullivan has started the season with a bang thanks to a match  winning knock of 72 to steer 2nd grade to victory.

The Tahs were sent in to bat on what was a difficult wicket, and “Sully” showed his class in anchoring our innings. He came to the crease with the score at 2 for 23, he summed up the conditions well to post the highest score of the day.

Sully is known for his string starts to the season, and if he keeps producing innings like this he will be banging down the 1st grade door in no time. 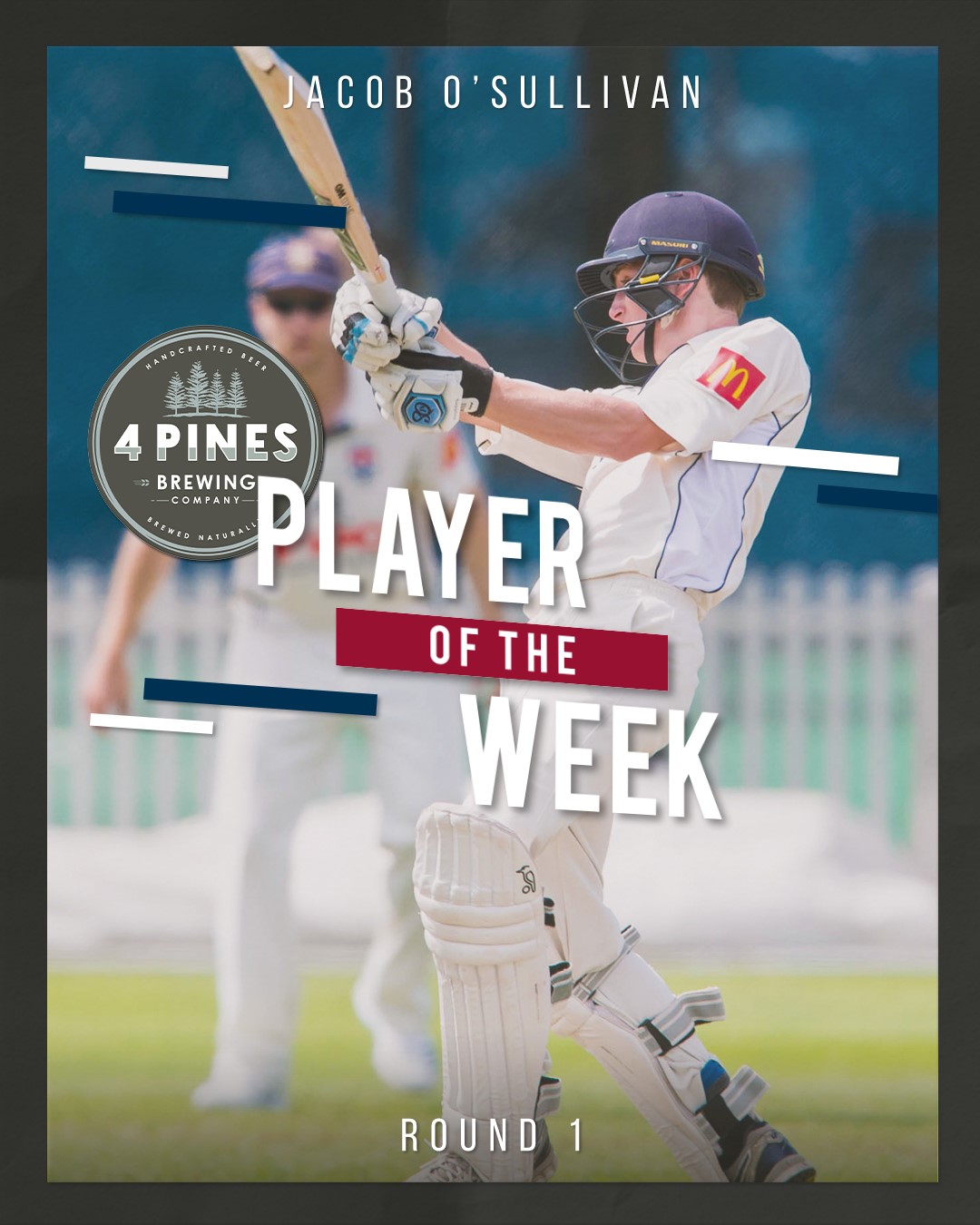 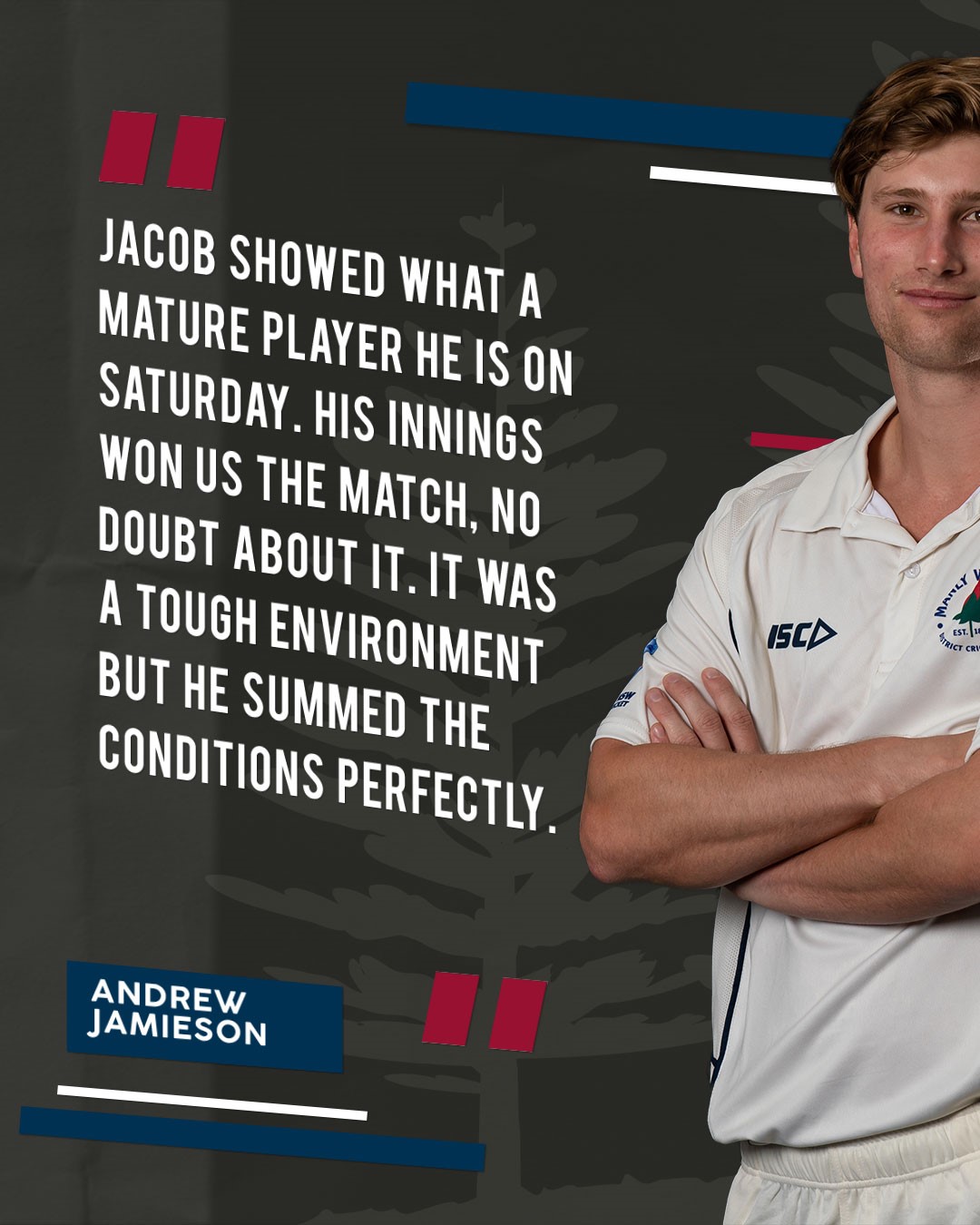 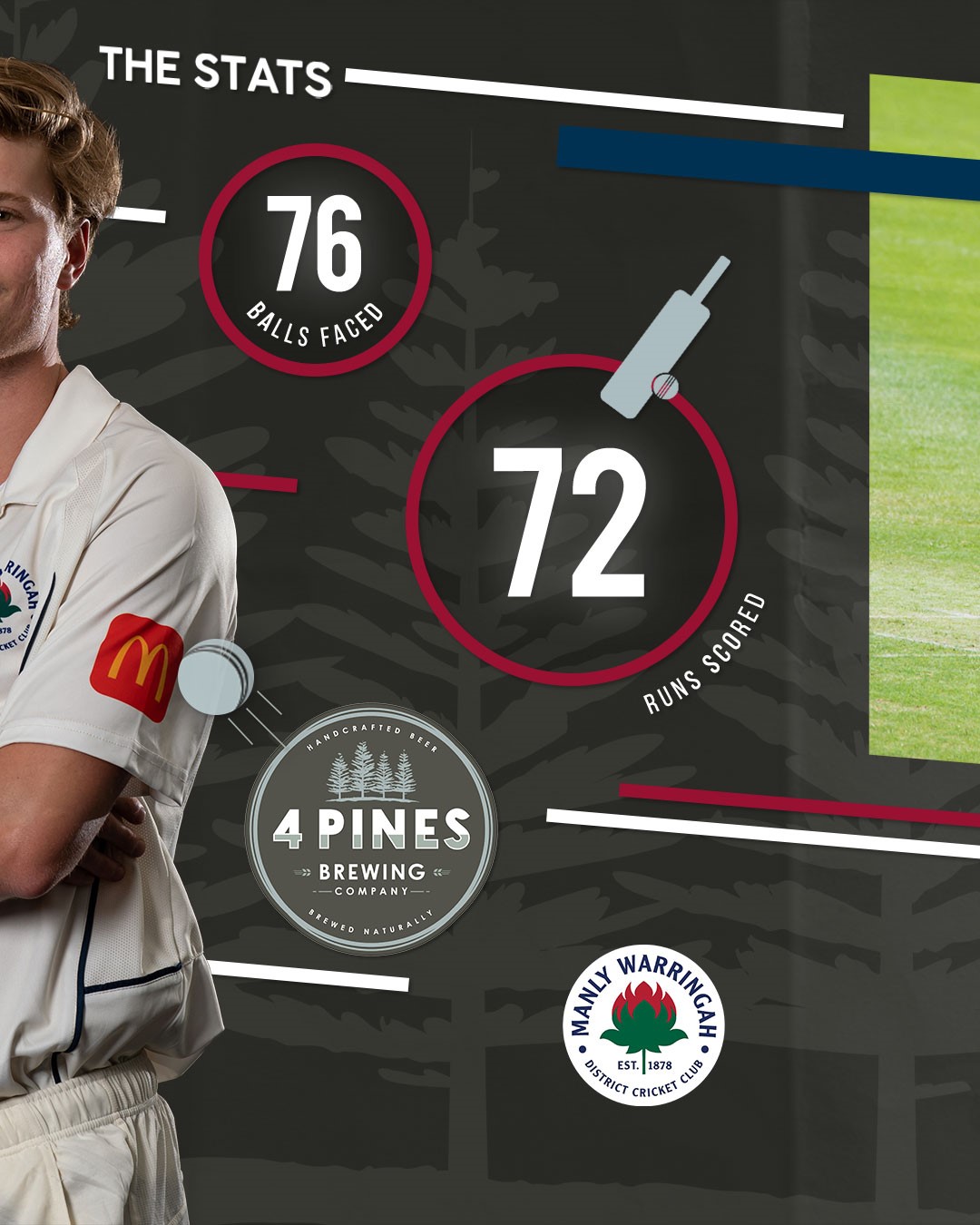 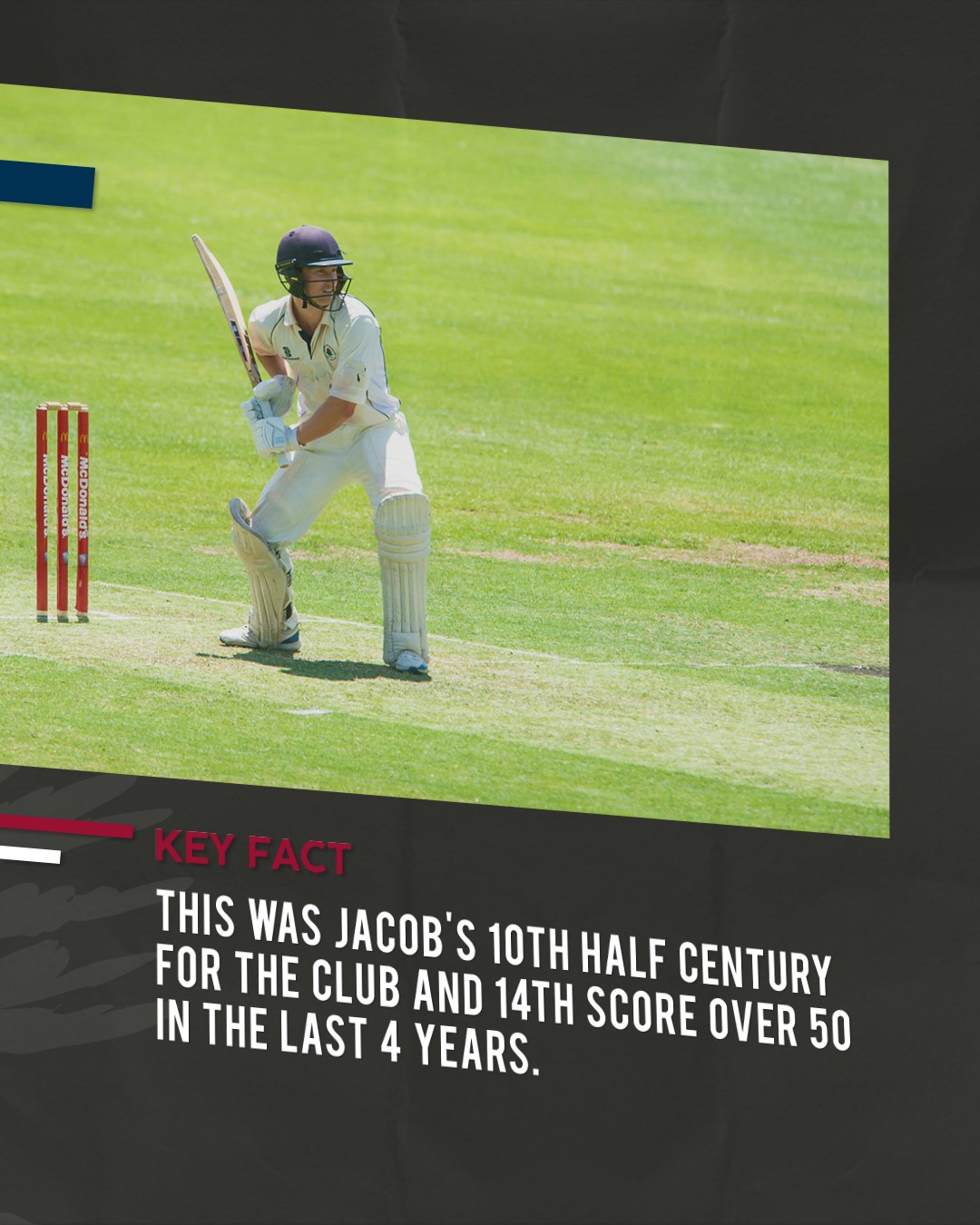 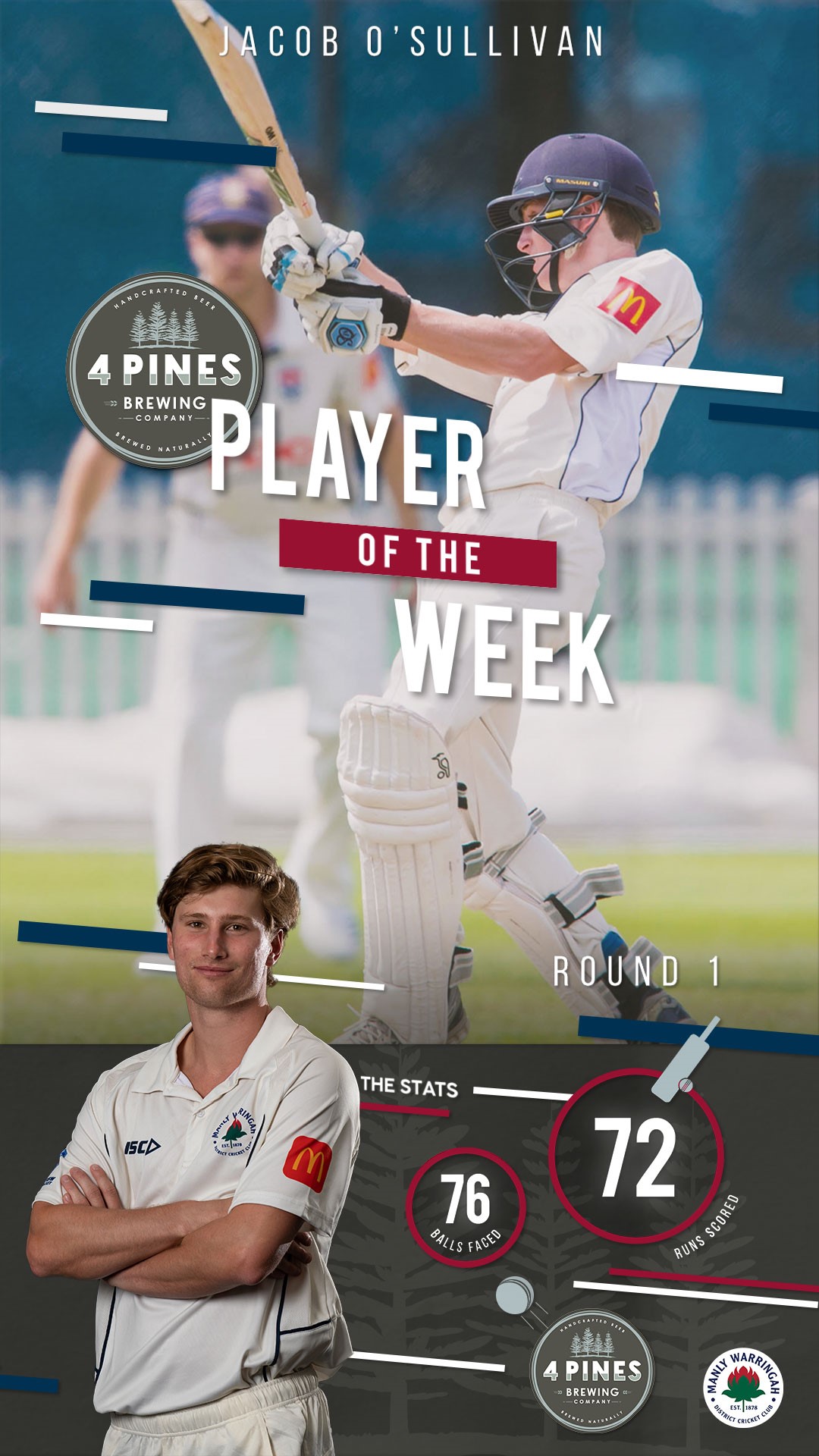 The Manly Boys turned up ready to go on a beautiful spring day at Manly Oval, captain Jay Lenton won the toss and decided to have a bat.

AB got the Tahs off to a quick start hitting a cracking pull shot into the grandstand in the first over of the match. Unfortunately both openers fell in quick succession leaving the score at 2/32, Jay and Ollie went about rebuilding the innings but as they just got themselves in Ollie fell with the score sitting at 55. After that it wasn’t pleasant viewing for the Manly boys with a massive collapse leaving the score at 7/67.

Ryan Hadley and Jake Carden tried to rescue the innings and put on an 8th wicket partnership of 44 before Jake chipped one to mid wicket on 24. The last two wickets fell quickly with Manly set the task of defending 118.

Opening bowlers Ryan Hadley and Greg West bowled beautifully and picked up two early wickets which had the Tahs right in the match, SOK then came on and grabbed the third wicket which had Northern Districts 3/42. From that point it was all NDs with Rodgie and Green controlling the game extremely well and putting on 80 to finish the game in the 29th over,

A tough result first up but still a lot of positives to take out of it, onto round two for the Manly Boys.

2nd grade arrived to a slightly damp, dewy Asquith Oval to kick off the long-awaited 2021-22 season.

Despite only about 4mls of rain falling in the entire greater Sydney region during the two weeks preceding Saturday, the pitch was soft and damp in places, especially around the crease. After the groundsman had berated all who dared approach the square, we were advised that an 11am start time was far more likely.

Just like the 2021-22 season, Round 1 was to be unexpectedly delayed also. To return a sense of normalcy to proceedings Jamo characteristically lost the toss and and Matt Brewster and Logan Weston opened up. When the 2nd ball flew over Logan’s head off a length we knew we were in for an interesting innings.

It was the first of many to jump off a length and Logan would wear a number on the body throughout the morning. Brewster also looked comfortable at the crease until the soft footing led NDs to bring a spinner into the attack about the 4th over. Ned started warming up. In trademark style Matt hit two classy boundaries before being outdone, this time by himself – hitting the next half-tracker to the man on the fence.

Such was the theme of our middle order really (except for Jacob O’Sullivan) with some excellent batting unfortunately come undone by some poor deliveries. That’s round 1 for you. Honourable mentions ought to go to Logan (26), who batted particularly well in undeniably the toughest conditions of the day and really toiled hard and Isaiah (26) who formed a vital partnership rebuilding with Jacob O’Sullivan when we lost a few quick wickets in succession.

Sully’s innings was undoubtedly the highlight, patient and contained at first before becoming more expansive as the innings neared the 40-over mark. Izzy, Tom Kaye and Sully helped steer the Manly ship towards a defendable total. At 6-168, 200+ looked on the cards.

Unfortunately losing 4 quick wickets at the end put paid to that, with TK’s handy cameo (run-a-ball 15), Jamo, Jordan and Josh Seward all falling without moving the score. We would have to settle for 179, which on a deck as unpredictable as that we hoped would be defendable.

TK and Josh opened up and were disciplined from the outset, taking a couple of quick wickets to put NDs on the back foot – Sully snaring a characteristically sharp catch at point. The indomitable Ryan Bishop-Perret came on and continued the barrage of impeccable line and length, limiting scoring options while at the other end Josh took another crucial wicket.

With the bowlers giving no width and great pressure being applied in the ring NDs fell to 5-27 when a partnership formed. Although the run rate began to climb, wickets became harder to come by as the deck had flattened out and was no longer offering any of the steep bounce that Logan’s body had felt that morning.

Just as the required run rate looked to be climbing too high, the two set batsmen began to find the boundary and keep pace. Some slightly looser bowling on the now-flat deck allowed them just enough room to play their shots, and when their number 8 began to hit a couple of 6s it began to get tight, with the run rate down below 5s for the first time in a while. In the end it was only with some tight bowling from the skipper Andrew Jamieson, some accurate, short, sharp spells from TK, the Bish and Seward and some great work in the ring that we were able to build the pressure necessary to begin taking wickets again.

Composed run outs to Sully and Jordan swung the momentum ever so slightly back into our favour before with 15 off 15 the Bish pulled out some clutch bowling to pin down their number 10 who eventually fell to the pressure, caught behind off 10 valuable balls. Once the no 11 came to the crease it was always going to be a big ask, and a miscommunication saw Isaiah pounce, sealing the win with the 3rd run out of the day.

In a match where we undoubtedly had the worst of conditions, it was awesome to see us pull together and kick the season off with such a gritty win. A telling stat was the wides bowled. 13 by NDs and 1 by Manly. In the end that was literally the difference. Plenty to take away from the game in both positives and negatives, but whatever way you look at it it was a fantastic team effort to get over the line.