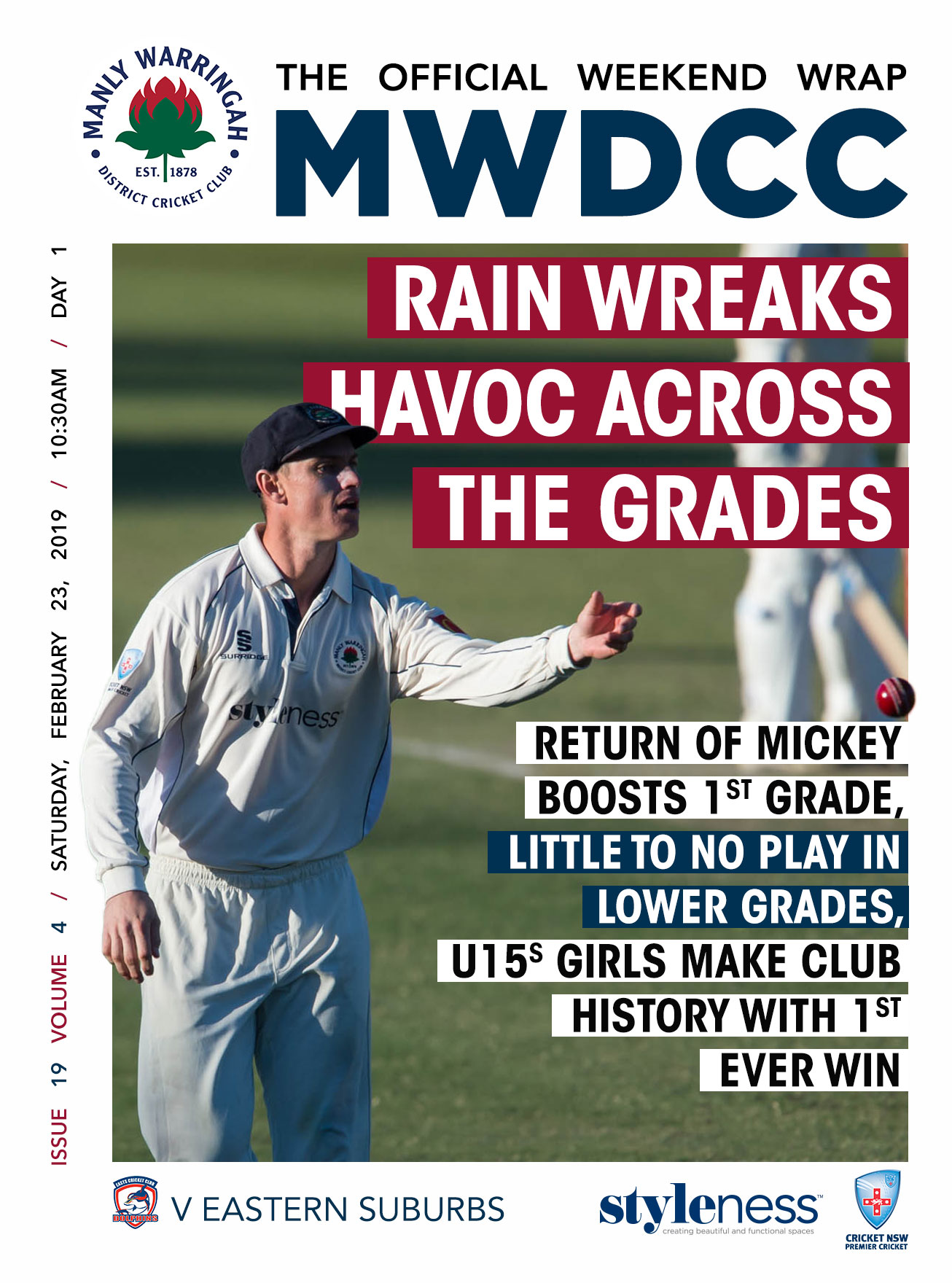 A frustrating weekend for the Styleness Waratahs as the rain got the better of all grades on Saturday against Eastern Suburbs. A combination of wet pitches, consistent rain and unfavourable conditions led to all grades coming off before the scheduled end of play with all grades playing 120 overs next weekend. First Grade came out with a bang, welcoming back Mickey Edwards in style to have Easts 6 wickets down with Mickey taking his first 5fa for the club in First Grade. Second Grade got sent in on a wet pitch, fighting back hard to be 8/104 thanks to Andrew Jamieson’s 27*. Third Grade have Easts 2/29 and will be looking to bowl well next week over 120 overs to topple the ladder leaders. Fourth Grade faced only two balls whilst Fifth Grade were unfortunately called off before even arriving at the ground. All grades will play 120 overs next week and look to take command of their respective fixtures.

History was made on Sunday as our very first Girls U15s game resulted in a win for the Manly Girls. The girls batted first and posted 9/183 off their 35 overs with Ellie James and Hannah Woolf amongst the runs. The girls then came out and dominated with the ball restricting Northern Districts to 9/80, Jazzy James the pick of the bowlers with 2 wickets. Our Brewer Shield girls went down to a strong Northern Districts side who posted 164 before bowling our girls out for 86.

Cult hero Mickey Edwards is this weeks 4 Pines Player of the Week after dominating with the ball in First Grades rain-affected day against the men from the East. The long, blonde locks were in full flight as Mickey tore through the top order, taking 5/25 off his 13 overs. Mickey nicked off 3 batsmen, bowled another and added a 5th to claim his first ever 5fa for First Grade. Mickey hasn’t played much cricket lately due to representative duties even though he is fully fit, so it is awesome to see the damage he can do when given the chance to play red and white ball cricket. Congratulations Mickey and hopefully its a sign of things to come for the Tahs over the next couple of weeks. 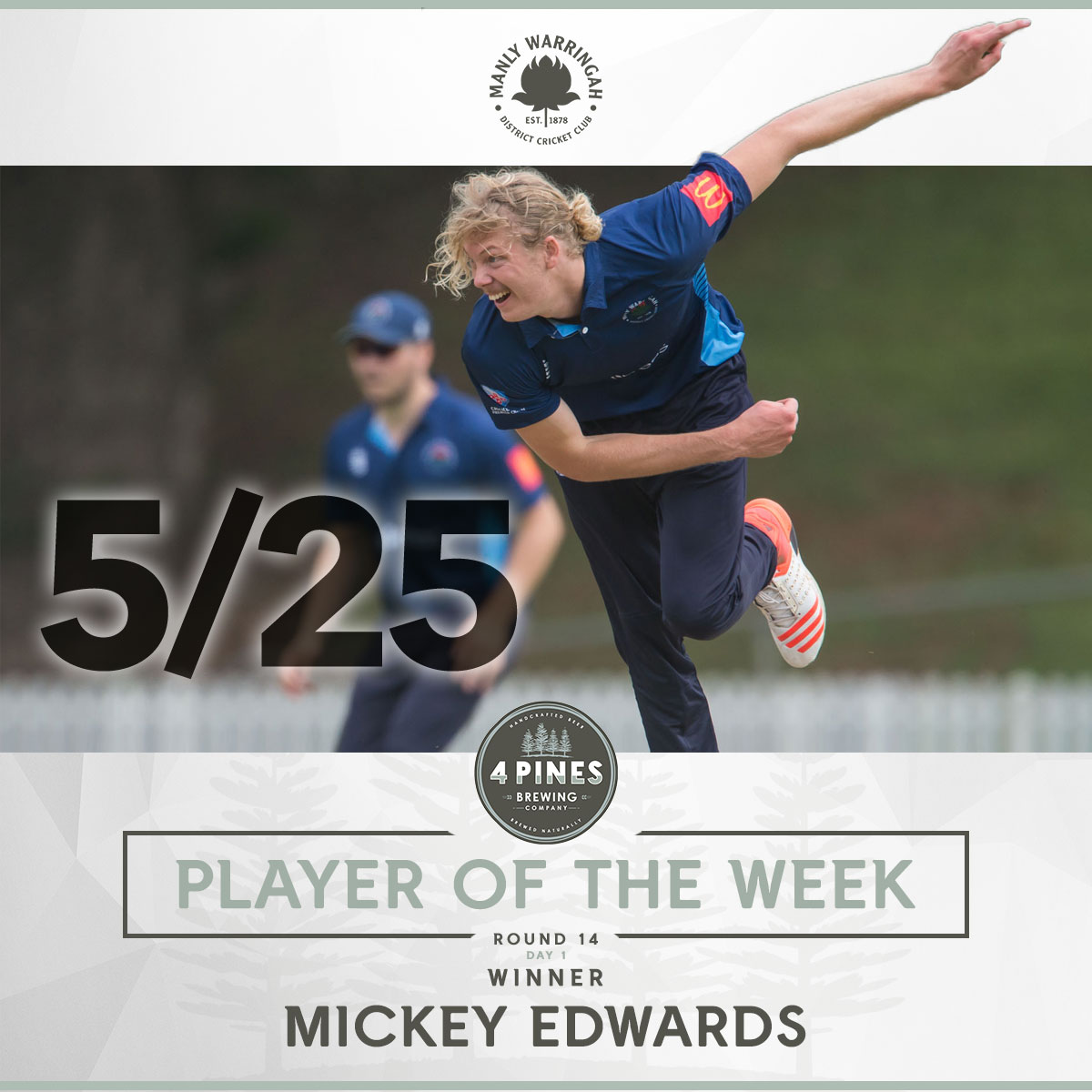 Rain didn’t stop Joey loosing another game of touch footy to start our day. Jay returned from injury and won the toss and bowled on a green Manly Oval pitch. Viss and Mickey opened up and bowled with tremendous patience, letting the pitch do the work. This was backed up by Hads when he came on as well. All this hard work had us in a strong position at the end of the day with East’s 6-79 off nearly 40 overs.

All the credit goes to the 3 seamers who bowled in great partnerships and hardly bowled any loose deliveries even though there was plenty of rain around. Of the three, Mickey got all the rewards on his comeback game for us, finishing with 5-25 from his 15 overs. Mickey has been working really hard this year from all reports and it’s so good to see him back in a Manly shirt and taking wickets.

2s arrived at a soggy Waverley Oval, but with both teams eager to try and make finals we were hoping to get as much cricket in as possible. East’s won the toss and decided to bowl on a deck that with so much moisture it looked like Max Webber had been out there all night. Unfortunately for the mighty 2s we lost a few wickets early with it nipping around a lot.

Jamo and Hamish are in there at the moment doing a great job fighting back with us 8-107 with a key member in the batting line up still to come. It’s an uphill battle to get the points this week but with this team we are still very very confident.

The temperature was cool and the rain was falling but our third grade side was hot, steaming and raring to go against ladder leaders Eastern Suburbs. A team breakfast organised by Sam’s corporate calendar led the boys to the Butcher’s Cafe where various stories about our Friday night adventures were discussed including quite nights in and the Canterbury Greyhounds where Matt ‘Wildcard’ Brewster was evicted from. The stage was set for a big day of cricket as we welcomed back the young gun and six hitting extraordinaire Jacob O’Sullivan into the side.

The momentum gained from breakfast was soon halted as the covers came off the pitch and a delayed start was arranged. A 1:15pm start was decided after the Tahs won the toss and with Sommers ready to go at the top of his mark, the stage was set. Sommers thought bumping the bloke back to Newcastle was a bright idea, however the pitch thought otherwise, only tolerating spin. Our first choice and third choice spinners, Issy and Nick, graced us with their spinning capabilities, as Sam Hole’s left arm “spin” was neglected.

With 20 overs bowled and Easts 2/29 the rain set in and stumps were called. 120 overs next week and a home quarter-final to play for. The boys will be eager to get on the park and make a big statement next week.

Two balls were bowled before the rain affected the day. Manly 0/2 off 0.2

After a rainy Saturday, we wondered what we would find under the covers at LM Graham Reserve for the U15 Girls match against Northern Districts Gold.  As the rain cleared we revealed a wet hession and some damp patches on the wicket, but mostly in areas that would not be in play. A bit of sopping up and a wind had the umpires happy to start on time.  All we had to do now was win the toss and bowl on the sticky wicket.

After the loss of an early wicket, Caitlin du Preez and Ellie James put on 51 for the second wicket.  The ball was pinging off Ellie’s bat with her first 3 scoring shots being boundaries.  After Caitlin fell for 18 Ellie then had to retire on 30, we had 2 new batters at the crease.  Hannah continued on where Ellie left off and had a few willing partners. On 29 Hannah was out LBW and just missed retiring.  We were now well placed at 5 for 108 after 20 overs.  Our softball convert Sophie Lowry held the last 15 overs together finishing 25 not out, and with Ellie returning to back end her innings with 3 more 4’s off the last over we reached a total of 9-183.

After another wonderful Manly lunch our girls set about restricting ND’s run chase.  Jessica Manning epitomised this effort, bowling consecutive maidens.  The decision to change ends for Emily Horstead and Maya Nicey gave the opportunity to bowl Jess a third over.  This proved the catalyst for victory as Jess bowled ND’s opener and top scorer making the total 2 for 41 in the 15thover.  The other highlight was Emily firing it over the stumps from square leg to Hannah to have the other perceived ND’s threat runout.  Manly would go on to restrict the scoring and pick up regular wickets to leave ND’s on 9 for 80 off their 35 overs.

Wickets were shared with Jess, Annabelle Fegan, Sallie Molyneux, Maya, Eliza Henry and Sophie all taking a wicket each.  Jazzy James was our multiple wicket taker with 2 for 2 off her 3 overs.

The realisation that they were the first ever Waratahs U15 girls team to win a match had big smiles on the girls faces as a generous round of applause welcomed them from the field. There was even an attempt at the Club Song lead by Hannah.

Bring on Parramatta next weekend at Weldon.

After a wet week and with grey skies overhead, we approached Storey Park hoping the coastal showers didn’t reach the northern suburbs of Sydney. It was damp but the covers had done their job and the local groundsman was there to give the pitch a final roll before play. There was a bit of moisture in the pitch and plenty of grass so we were surprised when Northern Districts Blue won the toss and decided to bat.
Chelsea and Laura opened the bowling and we got the start we needed with Laura picking up an LBW and then found the edge for a sharp catch by Ruby at slip. Both bowlers beat the bat continuously and Jasmin and Sienna continued the tight bowling. Jasmin picked up the 3rd wicket and Sienna was unlucky not to get a couple as well.
We lost our direction a little bit in the middle of the innings and the NDs batters took full advantage of any short balls. We then broke a 68 run partnership with a run out from a good throw from Robyn on the boundary. That however only started another strong partnership of 70 as NDs looked to accelerate their innings. Mia dismissed their top scorer, former Manly junior Annabel Hutt, with a well executed slower ball to hit the top of middle stump. We picked up another run out to finish the ND innings at 6/164 off 40 overs.
We chased down a similar total 2 weeks ago so knew we needed a strong platform to start. Nat and Robyn delivered with a 73 run opening stand when Nat was run out for 20. Just before that however NDs had introduced spin to the attack and our run rate had started to drop. With rain coming in from the south we knew we needed to try to lift the run rate a little to stay in touch. However, 0-73 was soon 5-74 including a few maidens. Their spinners bowled well and we had no answer with the remaining batters offering little resistance to be all out for 86. The highlight being Robyn’s innings of 45 runs with 7 boundaries.
We do need some practice against spin but hopefully the girls now realise that watching the game and supporting your team mates batting could be a more beneficial way to mentally prepare for an innings than inventing a new game of human skittles.
0Shares
PrevNext