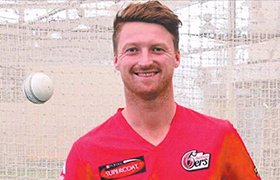 SYDNEY Sixers recruit Jackson Bird will be back where it all started on Sunday when the T20 Big Bash League franchise run a community clinic at Manly Oval.

The 28-year-old played his junior representative cricket with Manly before breaking into the first XI alongside the likes of Tim Cruickshank and Cameron Merchant.

Following a few years in the Sydney grade scene with Manly and Bankstown he moved to Tasmania, where the right-arm medium pace bowler became the talk of Australian cricket after snaring 53 wickets in the 2011-12 Sheffield Shield season.

Bird made his Test debut in the Boxing Day clash with Sri Lanka at the MCG at the end of 2012 and long-term international stardom appeared a formality.

A succession of injuries have curtailed his process in recent years, but after refining his action, Bird is ready to force his way back into the thoughts of national selectors.

“I haven’t felt this good in a long time so, touch wood, I can stay injury-free,’’ he told the Manly Daily.

“I am not getting ahead of myself. I know I have to perform over a long period of time and not break down.

“Returning to Manly (this weekend) will be great. I’m looking forward to catching up with some old faces and also formally starting my time with the (Sydney) Sixers.

“The playing group have been very successful from day one and I have bought into the culture.

“I think we will be right up there once the T20 Big Bash League starts.”

Sunday promises to be a memorable occasion for cricket fans.

Aside from the clinic, Adam Crosthwaite’s youthful squad take on St George from 10am before backing up to play fierce rivals Mosman from 2.30pm, featuring former club quick Nic Bills.

The Waratahs are unbeaten in the Kingsgrove Sports T20 Cup after beating Eastern Suburbs recently at Waverley Oval.