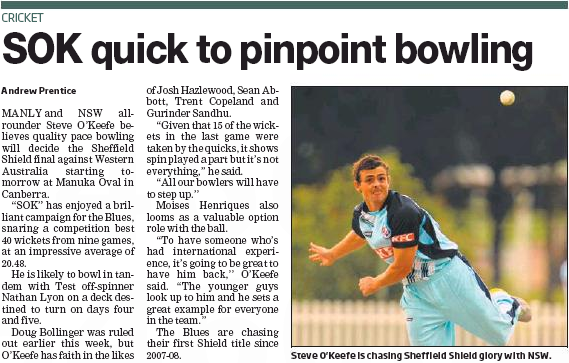 “SOK” has enjoyed a brilliant campaign for the Blues, snaring a competition best 40 wickets from nine games, at an impressive average of 20.48.

He is likely to bowl in tandem with Test off-spinner Nathan Lyon on a deck destined to turn on days four and five.

Doug Bollinger was ruled out earlier this week, but O’Keefe has faith in the likes of Josh Hazlewood, Sean Abbott, Trent Copeland and Gurinder Sandhu.

“Given that 15 of the wickets in the last game were taken by the quicks, it shows spin played a part but it’s not everything,” he said.

“All our bowlers will have to step up.’’

Moises Henriques also looms as a valuable option role with the ball.

“To have someone who’s had international experience, it’s going to be great to have him back,’’ O’Keefe said. “The younger guys look up to him and he sets a great example for everyone in the team.’’

The Blues are chasing their first Shield title since 2007-08.