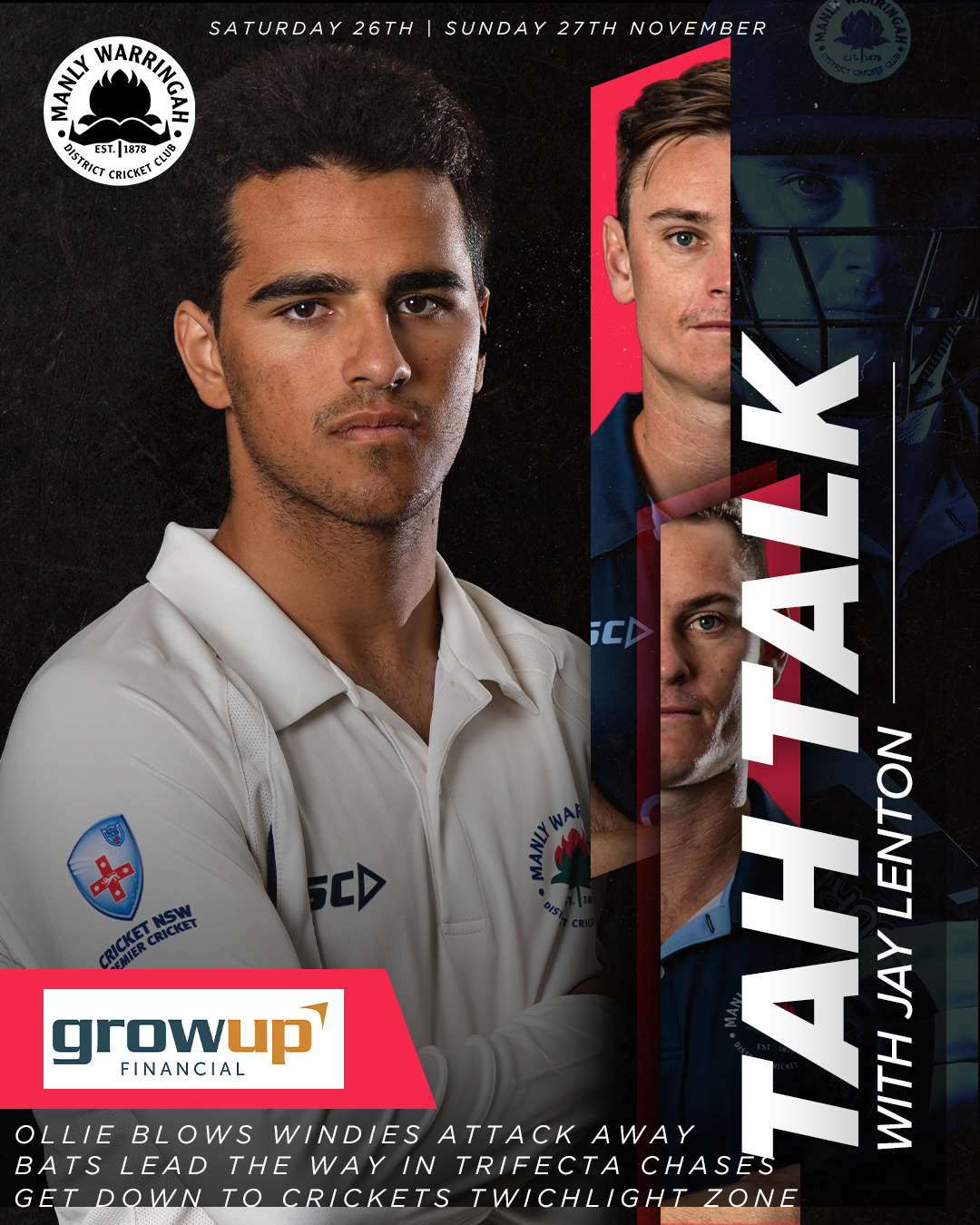 It’s that time again where our esteemed Men’s 1st Grade captain Jay Lenton talks about everything going on at Manly. Welcome to this weeks edition of Tah Talk with Jay Lenton. This week Jay takes a look at Ollies West Indies hundred, the great chases over the weekend for our girls, and our upcoming T20 twilight game at Grahams Reserve.

Ta Talk is proudly brought to you by our great friends at GrowUp Financial – www.growup.com.au

Ollie Davies has a fair bit of West Indian blood in that body he likes to show off at Curl Curl beach, so I know he would have savoured the century he scored for a NSW/ACT XI against the tourists in Canberra last week.

Ollie’s late grandfather Derek hailed from Trinidad and Tobago and was a well-known cricket figure in Port of Spain, while mum Simone remains a keen West Indies fan after meeting some of the great players of the 70s and 80s when she was a young girl.

Sim, husband Kev and Sim’s mum Ann were all down in Canberra to witness Ollie slice, dice and destroy the visitors’ attack in scoring 115 off just 106 balls.

Our man plundered 14 fours and three sixes against a bowling line-up led by Kemar Roach and featuring several players who will play against Australia in the upcoming Test series.

Coming in at No.3, Ollie joined fellow centurion Blake MacDonald in a 169-run stand for the second wicket.

We all know Ollie is one of the great young power hitters in the Australian game, but this innings again proved he can pull it back a gear or two and play a patient knock in the red-ball game.

Yes, he still went at better than a run a ball and hit plenty of boundaries, but just as impressive was his ability to let the ball go and pounce on the bad delivery.

The dig not only impressed the locals but also the Windies players, who were fascinated to hear about Ollie’s West Indian heritage.

I can assure you they will be hearing even more about him in the future.

Another Manly player to do us proud on the rep scene over the last week was Mickey Edwards.

The big fella returned to the NSW Sheffield side for the first time in several years and bowled superbly but without luck on a very challenging SCG deck.

Great to see you back in (the other) blue, Mickey.

BATS LEAD THE WAY IN TRIFECTA OF VICTORIES

Chasing big totals is one of cricket’s great challenges and our three women’s sides came through with passing colours last round.

1s, 2s and 3s were all set tricky targets in their respective games and held their nerve and composure to secure victories.

First grade was asked to chase 161 by Bankstown in its 50-over game and were in early trouble at 4-43.

But a brilliant unbeaten 75 from Shivani Mehta and late order support from Katie Letcher and Laura Judson saw us reach our target inside 40 overs.

On the Saturday, Renee Hough’s undefeated 49 (passing 1000 career runs in the process) and a Stephanie Hughes half-century helped us chase down Parramatta’s 156 with just one wicket to spare.

I know the girls worked hard on their batting over the winter – under the watchful eye of master coach Bobby Rollins – and the results are there for all to see.

GET DOWN TO CRICKET’S TWILIGHT ZONE

If you happen to knock off work a little earlier next Thursday (December 1), you might want to wander down to Graham Reserve to watch us in an important twilight T20 clash with Sutherland.

We sit fourth on a very congested table in the Sydney Sixers conference and need to see off the Sharks to ensure we stay in the finals positions heading into the last round.

We’re coming off a very good win over UNSW and are keen to really give this T20 comp a shake.

The Thursday twilight matches are a challenge for players and officials juggling work and family commitments ahead of the 3.45pm start, but it’s good to see Cricket NSW trying new initiatives.

In red-ball cricket, we host Mosman at Manly Oval over the next two Saturdays.

We are rapt to be sitting on top of the competition table but know there are some greater challenges coming up, starting with the Whales.

It’s a big round for the entire club, with all five grades sitting inside the top six.