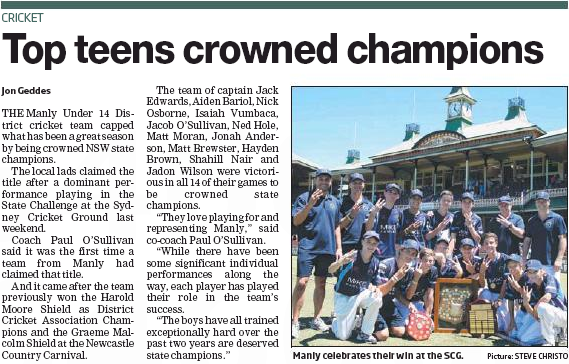 THE Manly Under 14 District cricket team capped what has been a great season by being crowned NSW state champions.

The local lads claimed the title after a dominant performance playing in the State Challenge at the Sydney Cricket Ground last weekend.

Coach Paul O’Sullivan said it was the first time a team from Manly had claimed that title.

And it came after the team previously won the Harold Moore Shield as District Cricket Association Champions and the Graeme Malcolm Shield at the Newcastle Country Carnival.

“While there have been some significant individual performances along the way, each player has played their role in the team’s success.

“The boys have all trained exceptionally hard over the past two years are deserved state champions.”