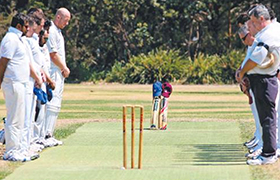 IT IS a sporting tragedy the world is still struggling to fully comprehend.

Last Thursday, Test cricketer Phillip Hughes died in St Vincent’s Hospital, the result of a freak accident at the SCG on Tuesday.

The popular country boy from Macksville perished doing what he loved – spanking balls to the boundary.

A routine bouncer from Blues quick Sean Abbott struck Hughes when he was attempting a hook shot. Time stood still. Hughes, batting for South Australia, stood momentarily with his hands on his knees before he pitched face forward into the turf.

The ball split the artery in Hughes’s neck and blood was already pumping into the space between his brain and skull.

The 25-year-old was placed in an induced coma, from which he never woke.

The teams held a minute’s silence before the game out of respect for Hughes.

Those in white also donned black armbands and many rested their bats outside their front doors on Friday as part of the growing #putoutyourbats social media campaign.

Matt de Groot, who works for Nova 969 FM on breakfast radio, grew up playing against Hughes.

The death of his junior representative sporting rival has rocked him to the core.

“It is impossible to comprehend,’’ Dee Why RSL batsman said.

“Cricket is not a game where people die out in the middle.

“I have followed his career closely from day one as I had that sense of connection.

“Phillip’s legacy will never be forgotten.”