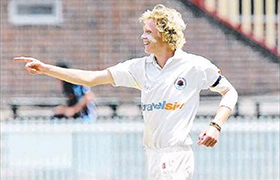 It was their second 10point win this season after smashing Blacktown at home in round two in October.

Rising paceman Mickey Edwards was the standout with the ball, snaring 4-29 from 18 vicious overs.

Jay Lenton (32 not out) and Cruickshank (31 not out) took care of the formalities late in the day after Nick McLachlan (3-32) also impressed with the cherry in the Magpies’ second dig.

“I have always had plenty of time for Mickey, he offers so much,’’ Cruickshank said yesterday.

“He is tall, fast and a real danger when there is a hint of reverse swing.

“When he got Jeff Cook out (for a duck) I knew we would be hard to stop because he is their key player.

“Mickey is bowling in good areas and really understanding his game, which is great to see.

“As a unit we are already focused on Sydney Cricket Club this weekend.

“They are always a tough side – especially at Drummoyne Oval.”

Play in the one-day clash begins on Saturday at 10am.

In a sign of Manly’s depth across five grades, they are top of the pile in the club championship with 514 points.