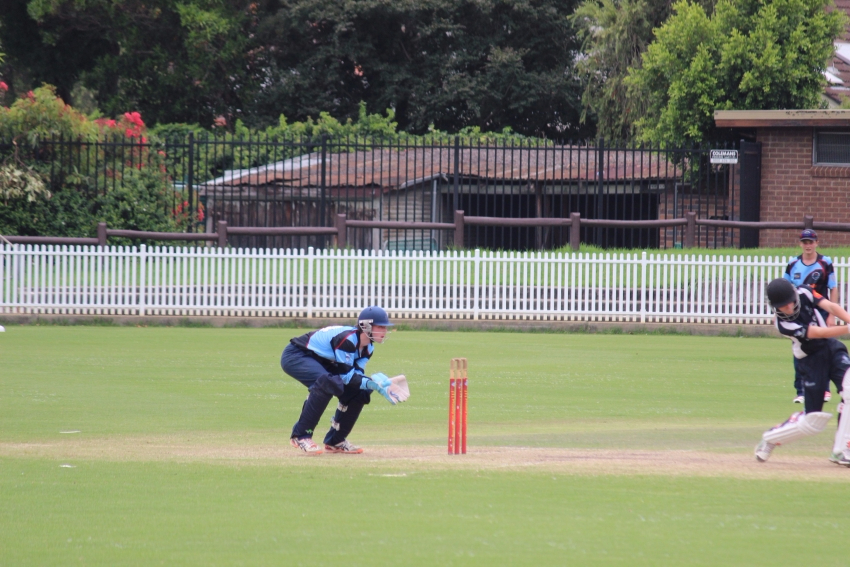 The undefeated Manly Green Shield side turned up to a picturesque Pratten Park in what was forecast as a day of searing heat. Going into the game for the Manly boys were two U15 debutants in Jake De Angelis and Harry Kantor-Smith.

We lost the toss and were sent out to field. Whilst high in energy in the first 15 overs, the Tahs had trouble finding wickets whilst Wests began to score at a solid rate.

Nick Osborne was handed the ball and claimed the breakthrough early in his spell, soon after taking his second to finish with a solid and very helpful spell of bowling and figures of 2-14 from 4 overs.

Two spinners then came on in Jonah Anderson and debutant Jake De Angelis. The two off spinners changed the game on its head for Manly, only going for 32 runs between them in the space of 19 overs. Jakey claimed his first wicket for the Tahs finishing with an exceptional 1-17 from 9 overs. Jonah finished with an extremely economical 0-15 off 10 overs.

Isaiah Vumbaca continued the spin attack taking 1-22 from 7 overs. The bowling was finished off with outstanding bowling from debutant Harry Kantor-Smith, taking a very impressive 2-15 off 5 overs. Finishing off the attack was opening bowler Gabriel Harris taking a solid 2-30.

A change up in the opening pair this week invited Ned Hole to the crease with Aiden Bariol. The bowling was of a high standard at the beginning, taking the wickets of Ned and Aiden. This brought the skipper to the crease Jack Edwards who was gone to another good ball from the opening bowler.

This brought Isaiah Vumbaca and Oliver Davies to the middle who managed to keep out some good swing bowling early in their innings. Both boys knowing they had to be there at the end, toughed out the good balls and tried to score off the very few loose balls.

Working together they worked hard to begin to score at a faster rate off the next few bowlers. The boys began to find the middle and ticked over the runs consistently.

Ollie brought up a very mature and classy 50. Ollie was eventually dismissed on 61 and Izzy on 46 after brining up a 118 partnership, only leaving 10 runs for the rest of the team to get as Nick Osborne and Jacob O’Sullivan got the job done in stylish fashion.

The Tahs won their 3rd straight Green Shield game, going into a tough clash on Thursday at Manly Oval.

Bariol lurking behind the sticks

Hayden Brown chasing one to the boundary

The boys celebrate another wicket, while #9 heads off to grab some more jelly babies from Wrighty