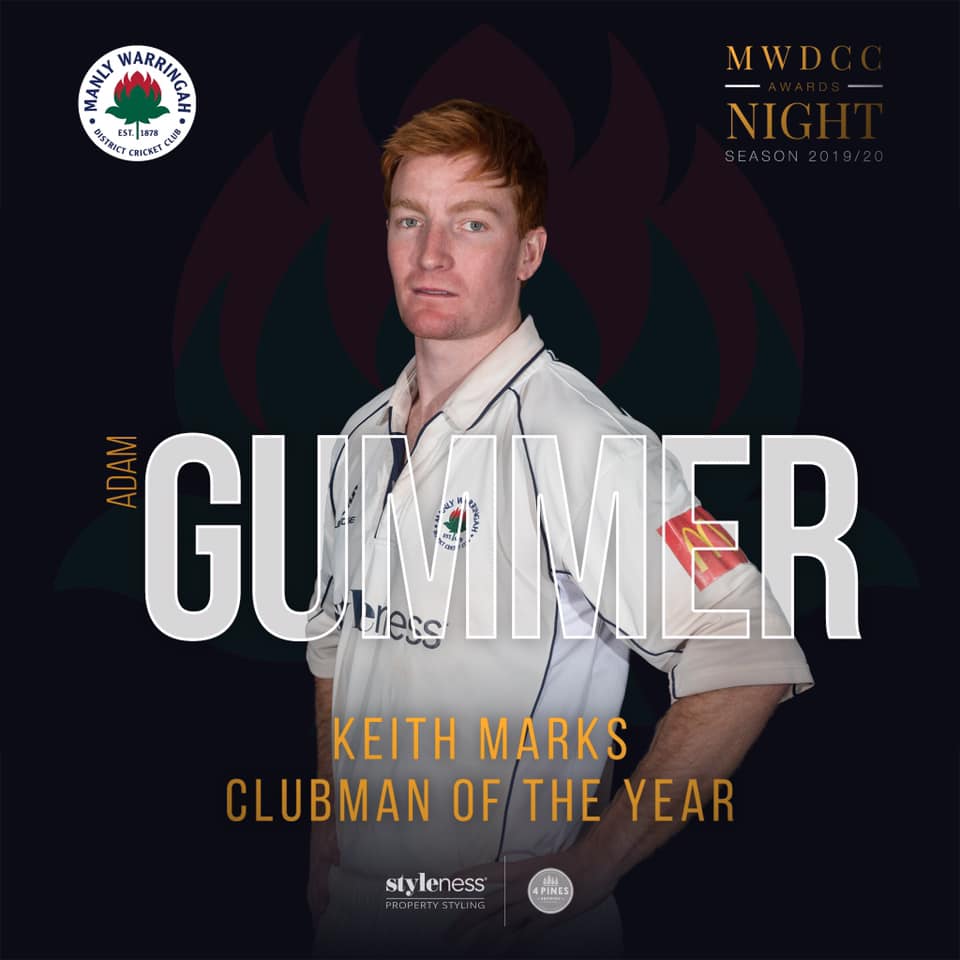 Adam Gummer has taken out the Keith Marks Clubman of the Year for 2019/20, as announced at the Styleness Manly Waratahs virtual presentation evening.

Adam has been an integral part of our club for many years and this season again proved what a great asset he is.

Adam has been key in organising all club events, including presentation nights (including this years virtual rpesentation night), the fantastic T20 day at Manly Oval, and the inaugral Golf Day during season 2019/20.

Congratulations Gummer on the award. It is thoroughly deserved.

Another key award that was presented during the virtual presenation night, was the President Award, which was awarded to Simon Waddington.

Awarded solely at the discretion of President Andrew Fraser, the Presidents award recognises an individual that has gone above and beyond but also flown a little under the radar.

Waddo certainly fits that description with his head coaching role of our Women’s program.

Waddo has helped grow the Women’s program to what it is at Manly Cricket today, and the award is very much deserved.

Congratulations are also in order for Nat Guyot, who took home the George Lowe medal for season 2019/20.

The George Lowe Medal for outstanding contribution to both our local and cricket community, and this season is the first time a member of our Women’s playing group.

Nat was also instrumental in our Media Team this year and is fast developing into an important cog in cricket on the Northern Beaches.

Congratulations Nat on all your hard work this year, and for representing the Waratahs so positively in the community.

Turning to on field performances, where Kristie Crawford was awarded the Senior Womens player of the year, and the Women’s Players Player.

Congratulations Kristie on an unbelievable season.

On the mens side, youngster Jake Osborne took home the Players Player, whilst Jack Edwards won the Mens Senior player of the year.

Young gun Joel Davies once again took out the Bob Lind Junior Male player of the year, whilst Robyn Medley won the Women’s Junior Player of the Year.

Green Shield superstar Toby Laughton, was also recongised for his achievements, where he was awarded the Langdon Gould Memorial Scolarship.

This award goes to the Green Shield player who traditionally impressed Langdon and who he wanted to support with payment of their fee’s for the next 3 seasons.

For 2019/20, the Board awarded the Scolarship to Toby, after terrific performances in Green Shield and Premier Cricket.

Congratulations to all the award winners on the night, and in particular Adam for being awarded Clubman of the Year, Simon for winning the presidents award, and Nat for winning the George Lowe Medal.

Please see the below table, for the individual team award winners.