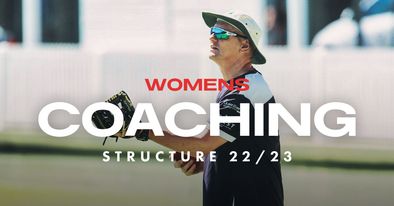 The Raydel Manly Warringah Waratahs are pleased to confirm that Duncan Kerr will take up the role of Head of Women’s Cricket, in a new Women’s Coaching structure for 2022/22.

Kerr takes over from previous head coach, Simon Waddington, who will focus on playing in Premier Cricket can captaining the men’s 5th Grade side.

An integral part of the Women’s club for many years, it is a well earned step up for Kerr, who will be leading the team with his usual passion and clear direction.

Kerr will be accompanied by assistant coach Dom Wheeler, who takes over from Ross Denny. Wheeler steps up from his previous role as Brewer Shield coach, and will also take the role as Women’s 1st Grade Coach for 2022/23, as

They will be joined by a variety of specialist coaches as our coaching team looks to continue our recent success. They will also be supported by Director of Cricket (Men and Women) David Gainsford who oversees our cricket operations and has helped put together the structure.

The much loved Bobby Rollins will be returning as batting coach, a massive win for the club, While Director of Cricket David Gainsford, will also serve as the Women’s pace bowling coach.

Baseball coach Mike O’Niell, who has done wonders for both the Men’s teams over the years, will also be joining the women’s coaching team as a specialist throwing coach.

The team will be aptly supported by Michelle Hare, Bill McLerie and Matt White as the 2nd Grade, Brewers, and 3rd Grade Coach, while Will Gustafson will serve as net manager.

Congratulations to Duncan and the team on their appointments, and good luck for the upcoming season.