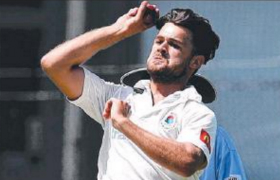 SIX first-innings wickets from English import Nathan Buck has the Waratahs primed for an outright win after day one at Manly Oval last Saturday.

The Lancashire quick was virtually unplayable at times, with the Bears’ batsmen finding themselves ducking for cover as he produced some quality work with the cherry.

Buck finished with 6-43 from his 14 overs after taking the new ball.

Yesterday, he told the Manly Daily he was simply happy to contribute.

“To be honest, it was about time I did something decent,” Buck said.

“It was a big game for us, so to help the boys be in a position to grab 10 points was great.

“I was hoping I would get a few wickets. I felt good in the warm-up.

“The guys then did the business with the bat, so now the bowlers have to step up again this weekend.”

Nick McLachlan finished with a couple of poles and it was the same story for allrounder Ahillen Beadle, who was cleared to play after being overlooked by the Sydney Thunder, who thrashed the Sydney Sixers in the T20 Big Bash derby.

“I was fortunate to have a few sessions with the Sixers late last week, which helped my confidence,” Buck added.

“With Jackson (Bird) and SOK (Steve O’Keefe) there, I recognised a couple of faces.

“I am going back home in February, so I want to keep taking wickets for Manly before I leave.”

Meanwhile, Manly have qualified for the quarter-finals of the Green Shield despite losing to Mosman on Sunday. David Gainsford’s under-16 squad were beaten by five wickets on home soil, finishing eighth after the pool games, with two washouts.

This morning from 10am at Mark Taylor Oval in Waitara, they will need to beat table-topping hosts Northern District, who are unbeaten and looking in ominous touch.

The home side will look to first-drop batsman Baxter Holt to steer them into the semi-finals.

The youngster has been the standout player in the competition, plundering centuries against Eastern Suburbs, Western Suburbs and Parramatta.

His current average is an incredible 275 and Gainsford knows he needs to be dismissed cheaply.

“Baxter’s record is outstanding but he is due for a low score,’’ he said.

“If we can roll him early, we will be hard to beat. The boys are fired up.”