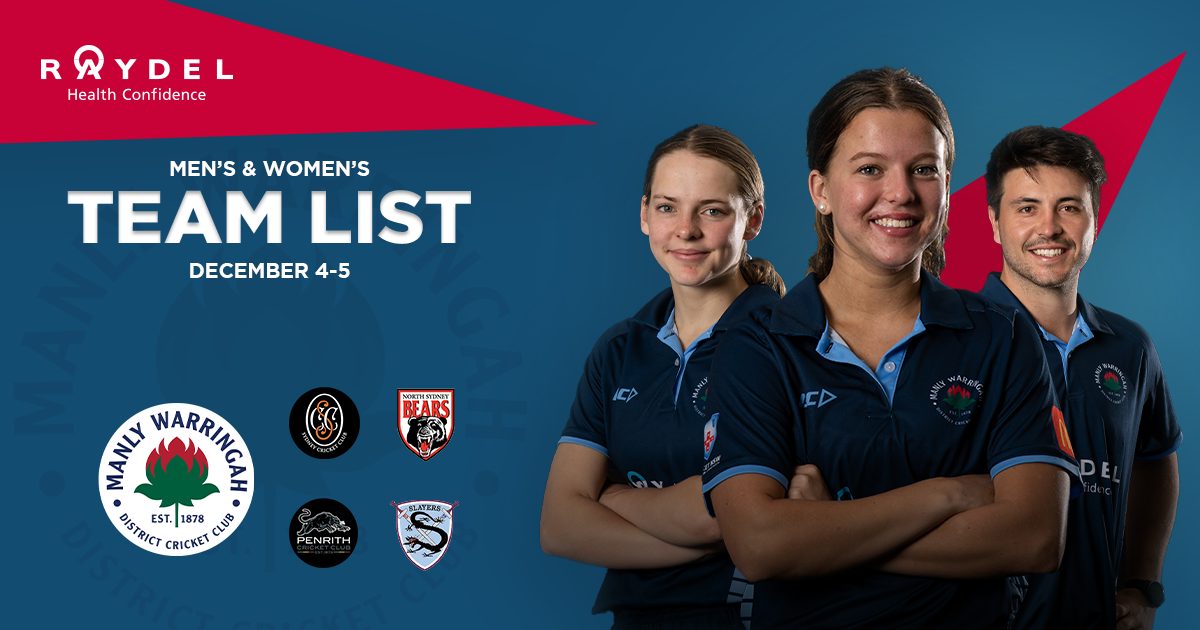 The Raydel Manly Warringah Waratahs have named sides for their upcoming clashes this weekend. This week sees Men’s grades 1-5 opposing Sydney, while PG’s and 1st grade T20 face North Sydney away on Sunday. The women’s competition begins its one-day matches, with women’s first and second grade up against Penrith, while Brewers have a bye, and 3rd grade match up against St George-Sutherland.

Last week was hindered by rain, meaning multiple sides didn’t get play in on Saturday. Men’s 1st and 3rd grade both came away with resounding wins, with Jay Lenton recording his second ton of the season. Brewers and Women’s first grade both got the biscuits, while 2nd grade had an unfortunate loss. PG’s unfortunately went down in the first game of Sunday’s double header at Manly, while 1st grade secured the points in a comfortable win against Easts.

1st Grade suffer the losses of Jay Lenton and Jack Edwards, as they depart for coaching and playing gigs in the BBL. In form keeper-batsmen Matt Brewster takes the keeping reigns from Lenton, while Isaiah Vumbaca replaces Edwards. Ryan Farrell will also take over the captaincy from Lenton, which will be his first ever game leading the 1’s side. Jordan Daly, Zach Trewartha, Sam Webber and Lachie Trewartha all come into 2’s from 3’s, while Ellis Raymond and Lachie Charles return to 3’s, with Tim Doonan also returning to 3’s for his first game this year. 4th grade enjoy the return of skipper Rochford from injury, while Evan Dunnachie also comes into the side. 5th grade make just one change, with James Waddington returning after being unavailable last round. PG’s lose skipper Joel Davies this week, therefore Josh Seward takes over the captaincy, with Lachie Trewartha and Liam Dinan included in the playing XI. 1st grade T20 have brought Jacob O’Sullivan, Matt Brewster and Ahillen Beadle in to fill the gaps left by Lenton and the Edwards brothers.

Kristie Crawford will make her women’s first grade debut this week, while Brewers players Emily Horstead and Eliza Henry both line up for 2nd grade due to the bye in Brewers. Brooke Frew, Stephanie Hughes, and Caitlin du Preez are all included in the 3rd grade side to take on St George-Sutherland.