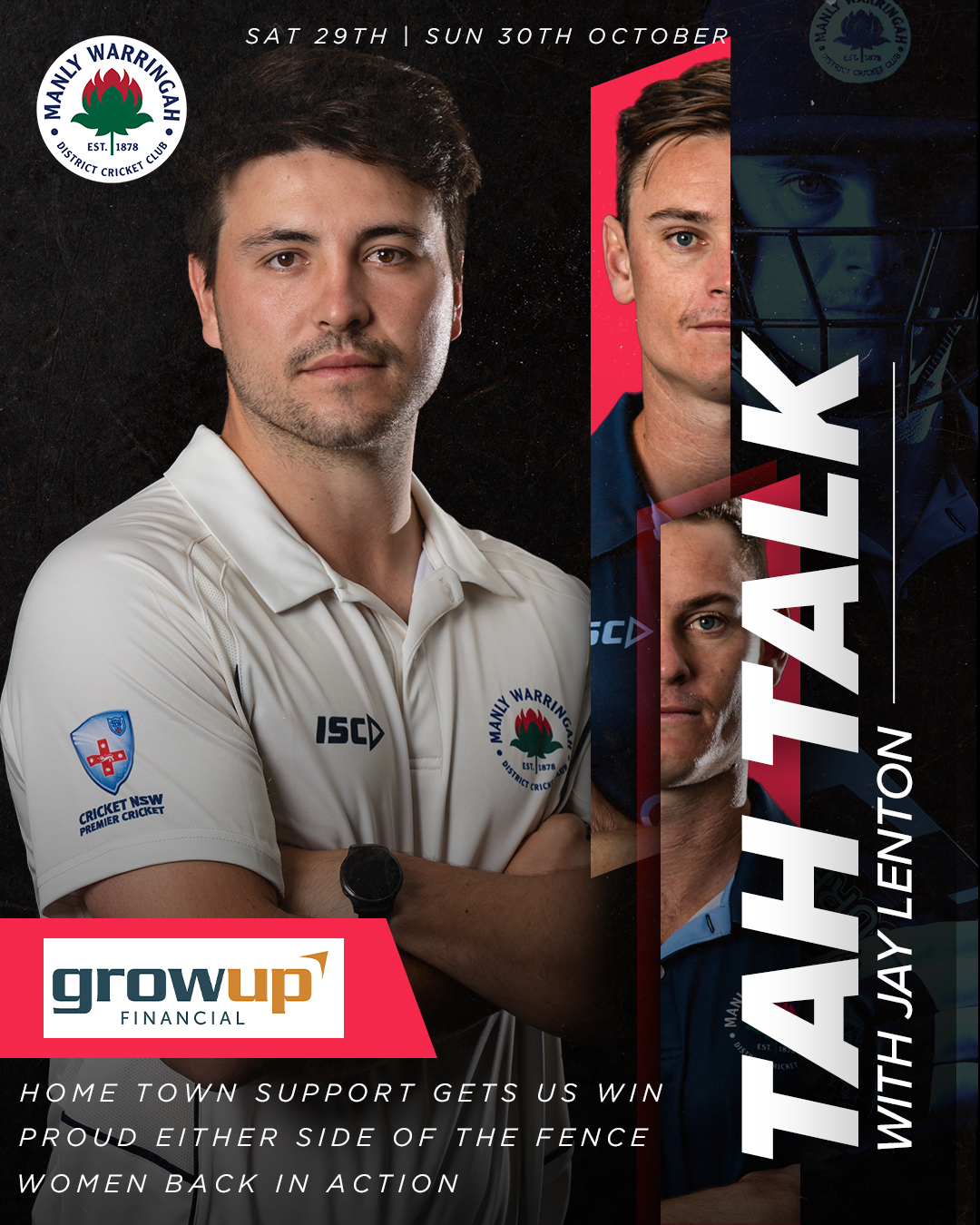 It’s time for our weekly Tah Talk with Jay Lenton. Proudly brought to you by GrowUp Financial – www.growup.com.au

HOME TOWN SUPPORT GETS US ACROSS THE LINE

They talk about how a home team can ride the energy from their supporters all the way to the winning post and we saw proof of that with our incredible last-ball T20 win over St George last Sunday.

The support we received from the hill and in the stands during tense periods of the game really helped us over the line.

And the good news is we get to do it all again this Saturday – hopefully without the heart palpitations!

First grade will take on neighbours Mosman in the Kingsgrove Cup from 10am followed by the Poidevin-Gray clash between the same clubs from 2.30pm.

The PGs boys will be looking to shake off the disappointment of a final-ball defeat to the Dragons to get their campaign moving in the right direction, while we want to build on our first-up victory.

We are really keen to find some consistency in white-ball cricket, which has not been easy in recent seasons due to the number of rep players coming in and out of the side.

Having that sort of talent at the club is a nice “problem” to have but it can come at the cost of cohesion and fluency.

Looking at the schedule ahead, there is the possibility of having some consistency in our team selections this year and that will put us in good shape to give the T20 comp a real crack.

The win over Saints was a great way to start but one victory doesn’t define a season and we will have to be at our best against Mosman.

Before that, we host Bankstown on Saturday for day one of a two-dayer at Manly Oval.

It’s always a great tussle with the Bulldogs, with plenty of finals clashes between the clubs over many years.

They are strong all across the park and will again provide stiff competition.

Ryan Farrell’s return to the starting XI is the only likely change for us.

DOING US PROUD EITHER SIDE OF THE FENCE

The Manly club is one I am incredibly proud to be a part of and not just because of the on- field performances.

The incredible work done behind closed doors that not many see blows me away.

From the board down, the club unite to give back to the community.

The 50-plus players on the hill last Sunday created an electric feel at Manly Oval, mixing some good-natured banter along with a healthy respect for the Saints boys.

But it was the hours beforehand where the majority were either in the canteen, cooking the BBQ or doing the ground announcing that really makes a difference.

And it’s not only game day that the wonderful members of MWDCC go out of their way to do something positive or give back.

On Monday several members of the playing group crossed the bridge(s) into the city to donate blood.

It is little things like this, along with the many more wonderful initiatives we’re involved with, that make me proud to #bleedblue.

WOMEN BACK IN ACTION

As I sit here writing this week’s column, I’m constantly having to shift my laptop to avert the glare of the sun.

What a wonderful problem to have after a wretched run of weather.

The good news is the forecast for the rest of the week looks good and cricket shouldn’t be impacted this weekend.

That’s particularly good for our women’s sides, who frustratingly were unable to bowl a ball last weekend due to wet grounds.

It was a major setback but one the girls hope to quickly overcome when they take on St George/Sutherland in the top three grades this weekend.

Wins in all three would be a great way to reignite the respective campaigns.