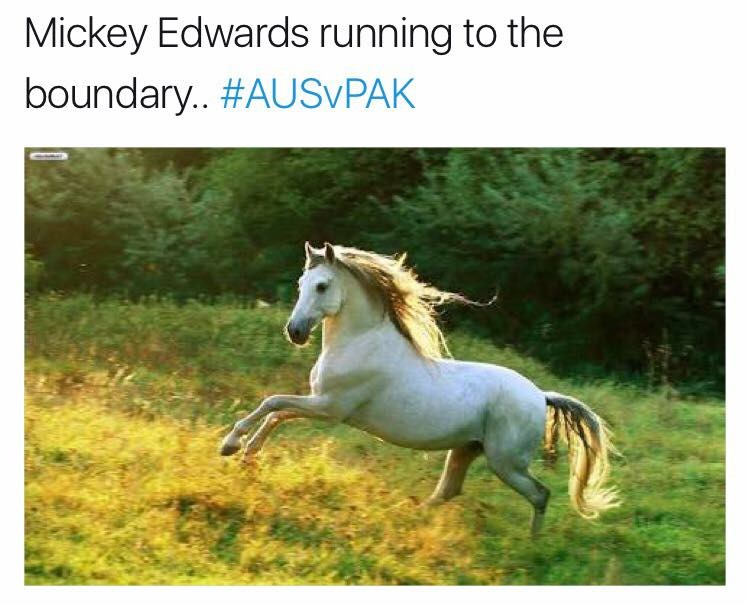 Mickey Edwards appearing on Sunrise
The last week has been whirl wind for Australia’s new sporting cult hero, Mickey Edwards.
No doubt the hype will soon dwindle and Mickey will go back to his normal job at Budgy Smuggler and as a rookie contracted player with Cricket NSW, but he has been lapping it all up as any of us would.

Twitter went into meltdown, with Mickey trending #1 in Australia for a period of time. Some of the comments were all-time. The below Twitter comment was without doubt one of our favourites.

There is even a Mickey Edwards appreciation Facebook page, with meme after meme sprouting out of nothing. It has been spectacular.

One of the big things to come out of it is how Mickey has handled the attention and answered all the questions. He has been honest, open, humorous and engaging, something that is not normally seen in this day and age of clean cut, say-what-you-need-to-not-what-you-mean-to type of sporting star.
QUICK LINK  Celebration Details for Michael Shepheard

It was a bit of a throw back to cricket in the 80’s, to when big Merv was an Aussie superstar, and the public just loved him for being who he was.

Maybe that’s what got the crowd so excited even before hearing the big man speak. He just looked like a local boy that everyone wanted to have a beer with.

But that’s not the only part of Mickey Edwards.

Mickey is a seriously talented fast bowler. He was never a golden child like some players are, never made any rep teams as a junior. But he grew into his cricket, getting quicker and taller by the year until he made his 1st grade debut at the tender age of 18.

If he gets his back right, Mickey could be anything.

But he is also a very loyal clubman.

When we used to train at Manly Oval, the one thing everyone hated doing was putting the nets down. Fair enough to. But the one person who was always putting his hand up to help whoever was organising the removal was Mickey…. every week without fail.

The Australian cricket team probably wishes they had more Mickey Edwards to bring a bit of character back into top level cricket, but there is also no doubt that grade cricket could do with more players and club members like Mickey Edwards.