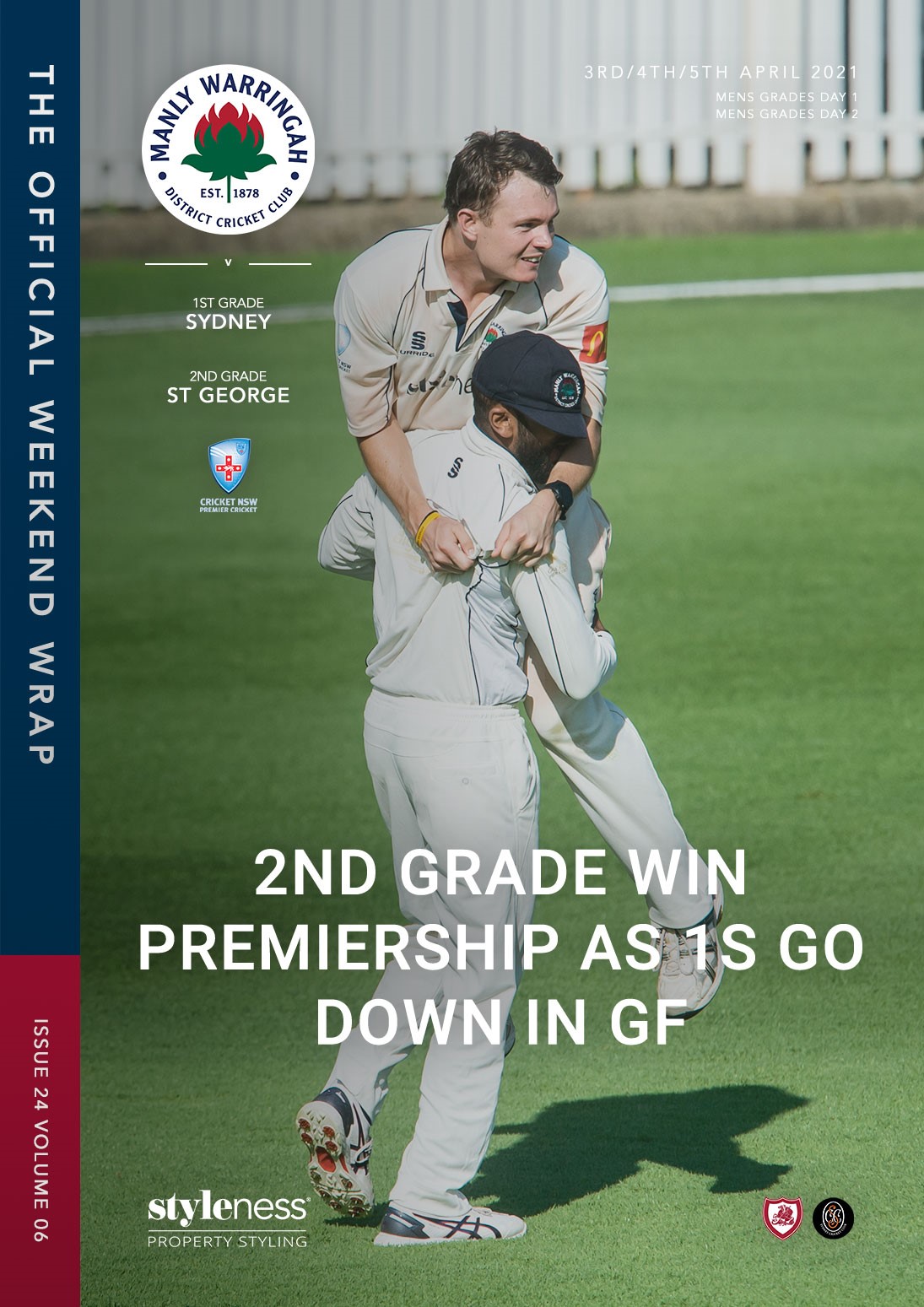 Congratulation to skippers Isaiah Vumbaca, Andrew Jamieson and their entire 2nd grade side for taking out the Premiership on Easter Monday. It was our first Men’s 2nd Grade Premiership since Ross Drury took his side to the victory in 1989/90. What a ride it was over the 3 days. It felt like we were on-top most of the weekend but we certainly made it hard for our selves, winning in the final few overs of the match.

Unfortunately 1st Grade were fairly easily beaten in their Grand Final against Sydney, who deservedly took out the Premiership. It was our first foray into the 1st Grade GF since 2014/15 when we won, and Grand Finals are not something to be sneezed at. Skipper Jay Lenton and his men can only gain from the experience.

Young gun Joel Davies picks up our 4 Pines Player of the Week for his performance in helping 2nd Grade win their Grand Final over the weekend. Joel contributed with bat and ball across all 4 innings, hitting 30 with the bat in the first innings and holding the team together in the second with 33, while taking 3 wickets in both the 1st and 2nd innings of the Dragons. Could be his last game in 2nd Grade for a while. 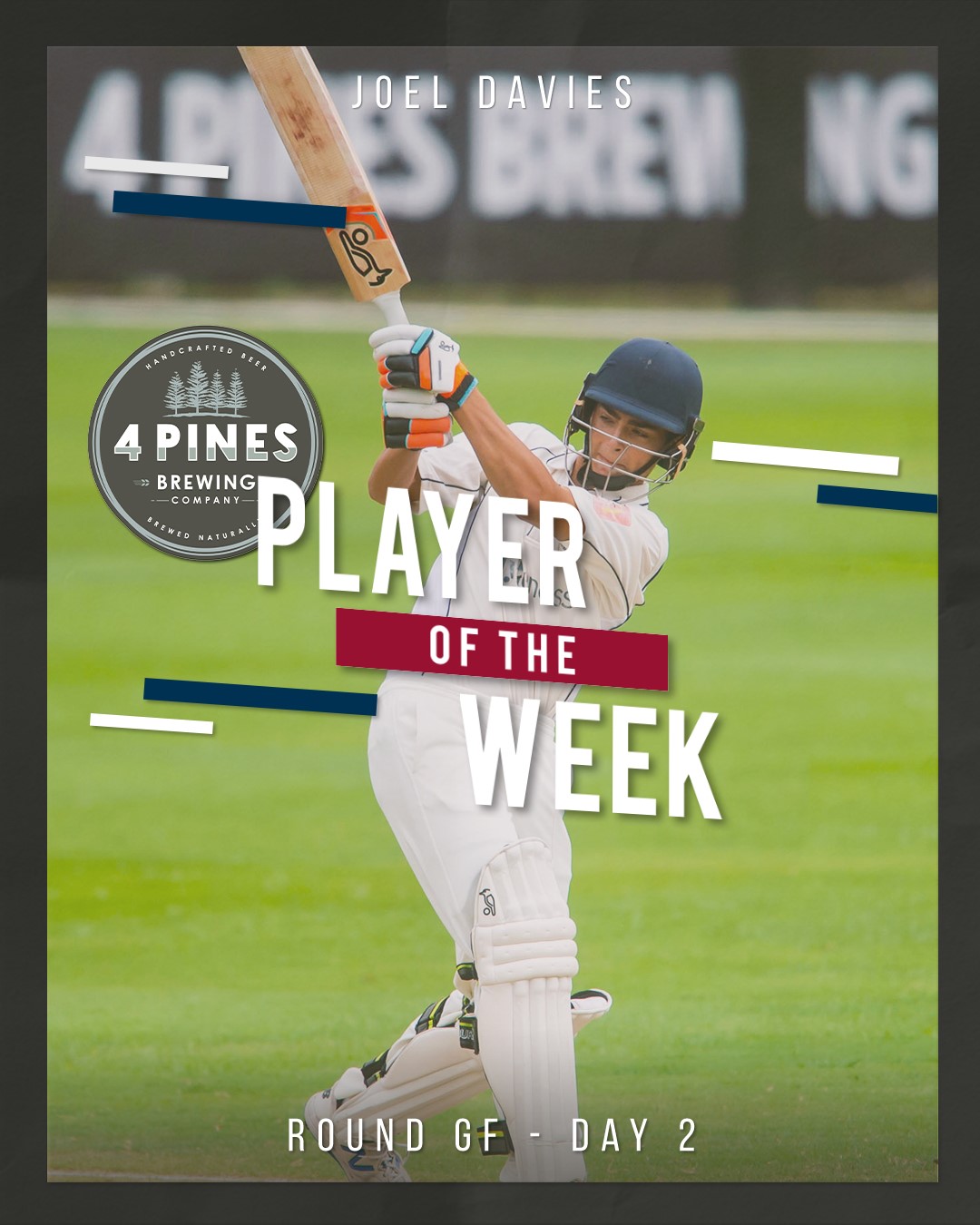 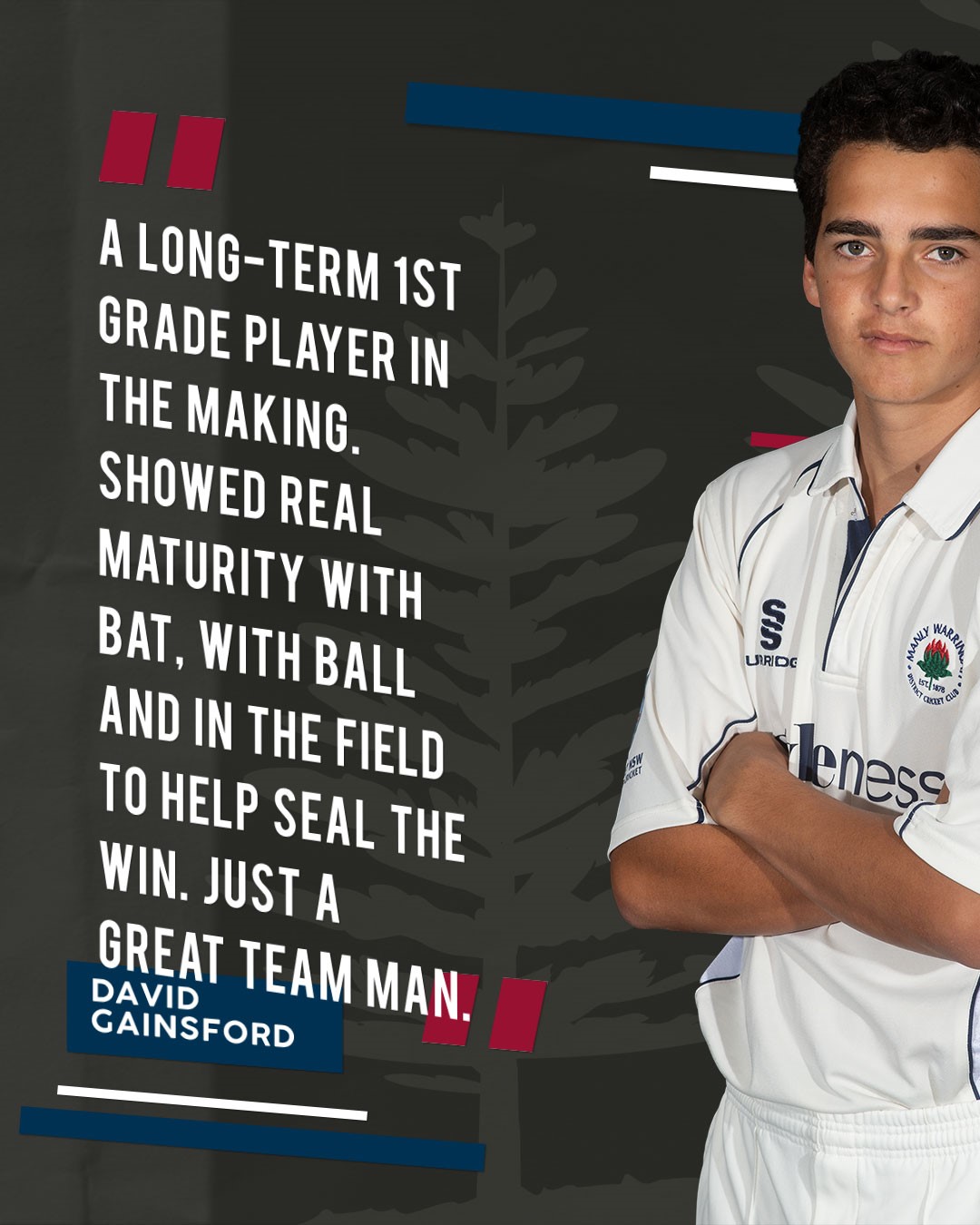 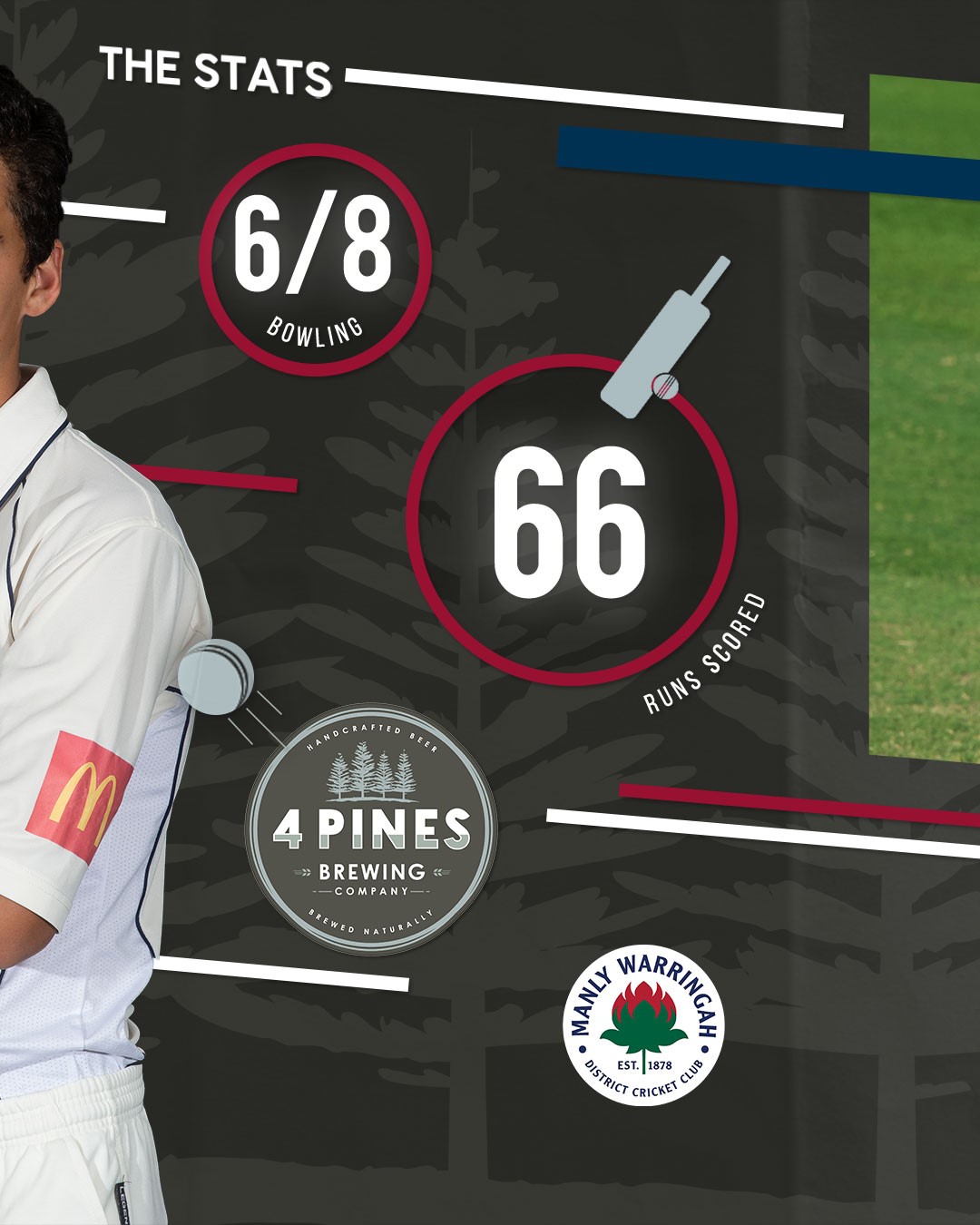 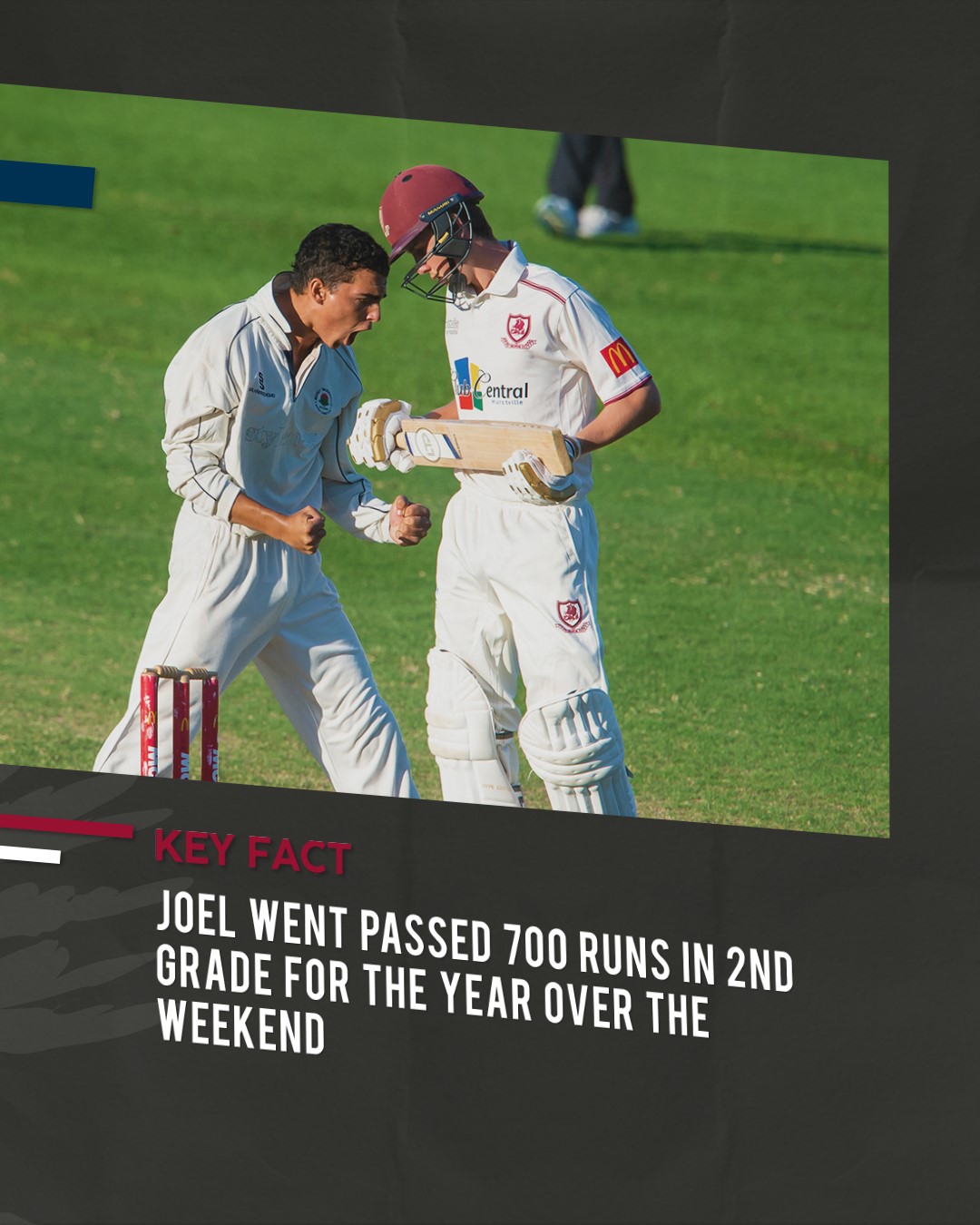 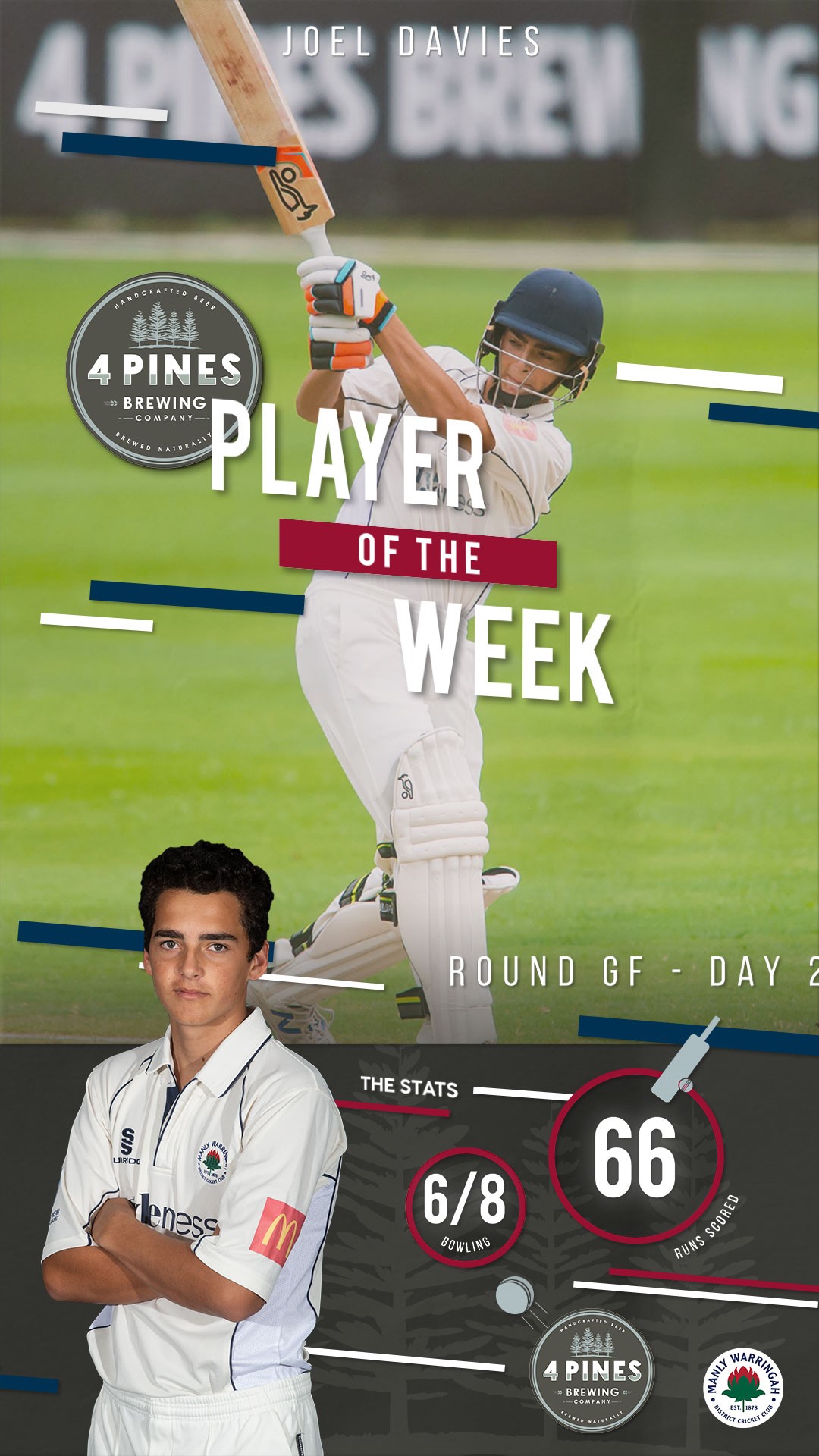 1st Grade came into the Grand Final match against Sydney looking to win our first title in the top grade since 2014/15. Sydney were the Minor Premiers and a very experienced side, but we new we were a chance if things went our way and we took our chances.

Sydney won the toss and put us into bat on what looked to be a flat pitch, which for the next 142.4 overs it turned out to be. We had a few sniffs at 3/95 as well as some decisions that went against us, but ultimately we couldn’t find the penetration to land the killer blow when needed as Sydney put on 352.

The positives in the innings were there for everyone to se. We bowled and fielded very well and with a bit of luck could have bowled then out for under 250. We also fought back superbly at the end of the innings, taking 5 for 12 to end the innings thanks to a magic spell from Ryan Hadley.

As a result, we came out in our innings with some momentum, but we were quickly on the back foot losing Herd, Lenton and then Davies first ball to be 3/19 and our hopes all but dashed. Despite some resistance from Farrell and Foster, we were bowled out for 123 at the end of day 2, and the game was abandoned due to Sydney’s big lead.

A disappointing final quarter of the match, but a lot to like about the season. Great performances from many players in the side, plenty of players gained valuable experience, and we will be back for another tilt next year.

A pulsating 3-day match against St George has culminated in the Manly Warringah Waratahs winning Outright to claim the 2nd Grade Premiership for 2020/21.

4th string captain Isaiah Vumbaca called incorrectly and was surprisingly sent into bat by the opposing captain on Saturday afternoon. After losing Brewster early, Ned Hole said to the opposition, “you are not getting me out” with a marathon 256 ball stay at the crease, falling just short of a GF hundred with 88. However a lower order collapse saw us go from 3/182 to all out 218, a very gettable target.

The beginning of day 2 saw St George start their innings in a positive fashion, but we started to take wickets at regular intervals and always seemed to be ahead in the game. They got to within 24 runs before Josh Wigney took the final wicket to give us a first innings lead.

With 19 overs to bat in day 2, Hole and Brewster both went early to have us 2/10, but Beadle and Davies both dug in to almost see us through to stumps. However, disaster struck on the very last ball of the day as Beadle skied one to mid-wicket to put the game back in even balance. We went to stumps at 3/52, a lead of 76.

Day 3 did not fair to much better for our batting line-up as we struggled early, losing 3 quick wickets to be 6/72. Seward and Davies saw us to lunch at 9/99, but Davies was out not long after the luncheon, and 2 more wickets saw us in a precarious position at 9/134 with more than 50 0vers still to play in the day.

Josh Seward was coming off 2 ducks in a row but combined superbly with new-found all-rounder Josh Wigney to put together a vital 45 runs last wicket stand and get the Tahs to 179.

So the scene was set for the final afternoon of the season. St George needed 204 runs off 33 overs for victory, while we simply needed to avoid defeat due to our first inning win.

The Dragons started well, taking 33 0ff the first 3.1 overs before a fantastic running catch from Josh Wigney got us our first wicket. They continued to fall regularly until at 5/97 things were looking in our favour. However the game took another turn with a very quick 55 run 6th wicket partnership. At 5/152 and needing roughly a run a ball, St George were in the box seat.

It was then that the Tahs stood up, taking 4/7 to reduce the Saints to 9/159. We could see the premiership on the horizon. A 30 run last wicket stand off 12 balls got everyone’s heart racing, but a skied catch to Josh Wigney off the bowling of skipper Isaiah Vumbaca sealed the win.

What a game, what a day. People cried as victory was obtained, and the large crowd that had gathered for the afternoon’s entertainment saluted what was a magnificent game from both teams.

But in the end, Victory was ours.