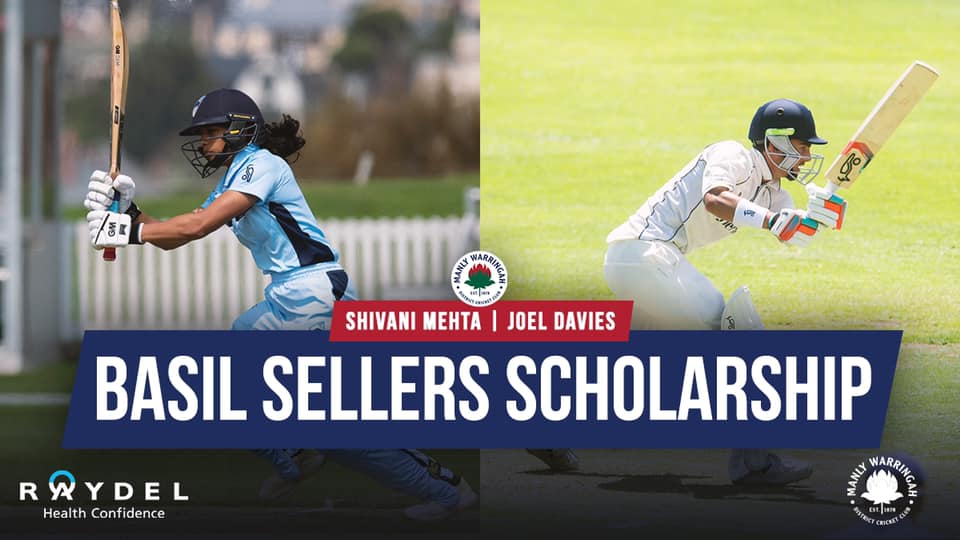 The Raydel Manly Warringah Waratahs are pleased to announce that two of its finest young cricketers have been awarded the prestigious Basil Sellers Scholarship for 2021/22.

New Waratahs recruit Shivani Mehta, and local junior Joel Davies were both presented the award by Cricket NSW and Basil Sellers after stellar performances over the last couple of seasons.

The scholarship provides financial support in pursuit of their ambition to become professional cricketers, including a sponsorship from Kookaburra.

New recruit Shivani Mehta, is one of the rising stars in the game, and has already enjoyed great success in her young career, including being a member of the NSW Metro U19 squad for the past three seasons and has represented her state at two National Championships.

Local junior Davies has been a stand out for the Waratahs as well as the NSW Metro sides in previous seasons, including being a member of 2020/21 2nd Grade Premiership side, where he was awarded man of the match.

Founder of Scholarship and philanthropist Basil Sellers AM said each of the Scholars have a great opportunity to pursue their dream of becoming elite cricketers.

“I look forward to following with keen interest the progress of this year’s recipients and encourage all to seize upon the support and opportunities they have been afforded as they look to follow in the footpaths of previous scholarship holders who have gone on to not only represent, but captain Australia,” said Sellers.

Congrats to both Shivani and Joel on being awarded the scholarship, and we look forward to seeing you both continue to grow as cricketers for Manly and NSW.