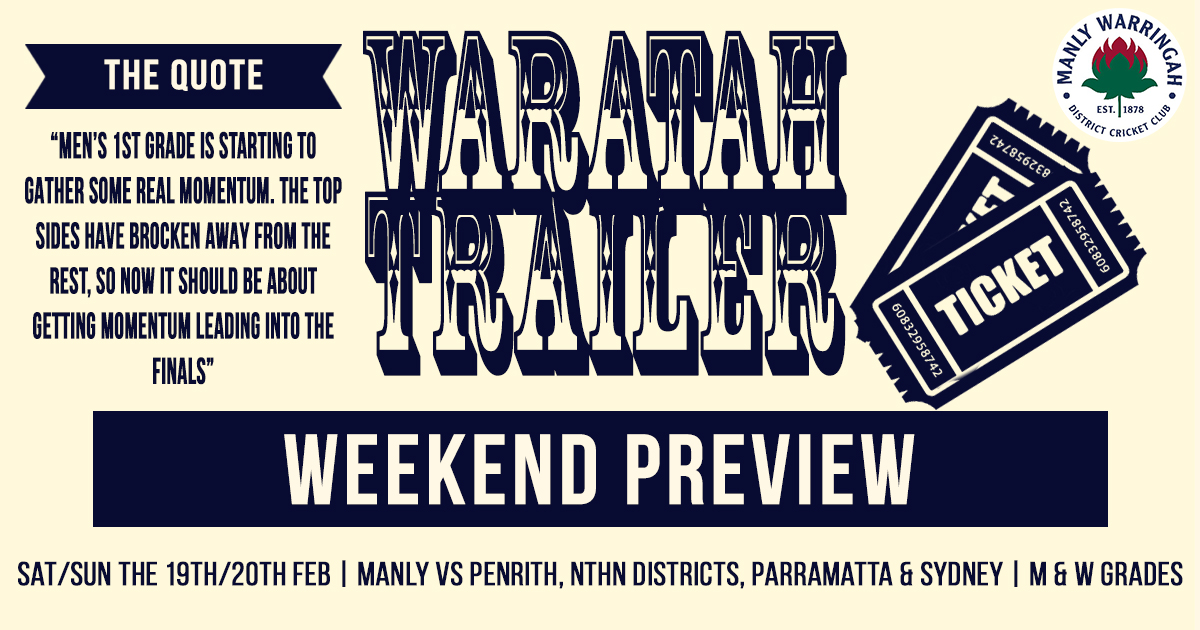 It’s set up to be another huge weekend of cricket for the Manly-Warringah Waratahs as the Men take on Penrith and the Women face off with Parramatta and Sydney. Men’s 1st grade will switch back into one day mode after a comprehensive outright victory against Gordon last weekend, the remaining grades will continue with one day fixtures.

Jay Lenton’s first grade squad now sit just six points behind the third placed Randwick after claiming all ten points last weekend. Ahillen Beadle achieved the rare feat of being on the field for the entire match with an extraordinary 101 not out in the first innings and 27 not out in the second dig, AB has been nothing short of exceptional for the Tahs this season, averaging a tick under 56. Their opponents Penrith have struggled this season and sit in 18th position, although the ladder position the Panthers still have many dangerous cricketers in their line-up including wicket-keeper batsmen Tryan Liddiard who is averaging 43 this season and is a brilliant one-day batsmen. It’ll be a massive match for the Tahs as they go looking to jump into the top three.

Second Grade unfortunately couldn’t get back on the park after posting 270 in just 43 overs last weekend thanks to a classy 93 not out from Jacob O’Sullivan. They will be looking to close the gap on 2nd place as they return home to Manly Oval this weekend. Penrith will be hungry for a win as they look to climb a few positions on the ladder.

The Main Grade will be full of confidence heading into their round 14 clash with the Panthers after a comfortable victory over the Staggs last round. Opening bowler Alex Bain continues to impress and was rewarded with his first five wicket haul of the season last Saturday, Bainy has taken 25 wickets this season at an average 14. Jordan Daly has found some form and anchors the batting line-up reaching 50 in two of his last three innings and will again be an important player is this week’s match. Penrith currently linger down in 15th but sit less than two wins away from the top 6, so they will be desperate for a win this coming weekend.

Dr Rochford’s 4th grade have slipped down to 4th but are still just one win away from the top spot. Just like their third-grade side, Penrith sit two wins away from the top 6 and will be searching for a much-needed win. Brynn Mendel returned to the club this season and has hit the form straight away which saw him reach 2nd grade a few seasons ago, Brynn has an average of 33 this season and is a very dangerous top order batsman.

5th Grade head into this weekend’s match with a must win attitude as they look to stay inside the top 6.  They’ll head to Rance Oval to take on the 16th placed Penrith. Young left handed opening batsmen Hayden Calvert has been impressive this season with 276 runs at an average of 27 and will be key again this week.

Mikaela Turik’s first grade side hit a little road bump against Northern Districts last weekend and will be looking to make amends against Parramatta at Manly Oval this Sunday. The Tahs currently sit in 5th and are just two points off the top 4. Their opponents Parramatta sit in 8th. Saskia Horley will be looking to get back in the runs after breaking records left, right and centre a few weeks back.

2nd Grade still have a chance of playing finals cricket this season but this weekend’s fixture against the 3rd placed Parramatta becomes a must win. Nat Guyot continues to lead by example with the bat and has 256 runs at an average of 29 so far this season. The bowling group has also been exceptional this season and will again play a massive role in this weekend’s result.

Renee Hough and her third grade side will be trying to hold onto 4th position this round as they take on the 5th placed Sydney. Annabelle Gilbert produced her best figures of the season last weekend taking 5/14 and will be one to keep a close eye on for the coming weeks. Mia Nel continues to be a crucial member of the team averaging 20 with the bat and just 12 with the ball.

It is shaping up to be a massive weekend of cricket, Men’s first grade is starting to gather some real momentum, The top sides have broken away from the rest, so now it should be about getting momentum into the finals. Along with the other grades all still in finals contention it should be a cracking weekend.